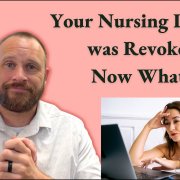 What should a nurse do after a nursing license is revoked? Well, the first question is why was it revoked? Normally, a nurse’s license would be revoked because they violated the terms of a consent agreement. If a nurse were to get in trouble or maybe have a substance abuse issue, normally a board would put them on probation, which would be through a document called a consent agreement. And then in that agreement, it would have terms of, let’s just say a nurse has an opiate addiction or something like that. And then they were caught diverting and then the board found out and then put them on probation. Usually, those would include random drug testing, supervision at work, maybe AA or NA attendance, a nurse recovery group, or something like that.

Maybe they can’t work nights or home health. In this scenario, let’s just say a nurse failed a drug test and the agreement states, if they fail a drug test, their license is automatically revoked. Normally, in each agreement, it’s going to state if it’s revoked, this is how long that it’s revoked for until you can reapply. I want to talk about some strategies and tips on what a nurse should do during that revocation period, which would put them in a better position to get their license back once that period ends. In most states, it’s usually somewhere between three to five years. If a nurse has a license revoked, after that period ends, you can then reapply. Well depending upon why the license was revoked will depend upon what you need to do in the interim.

So, you need to think about it like, okay, you violated an agreement for a reason. You were put on an agreement for a reason. What was the reason? Substance abuse is an easy thing to deal with. If they are concerned that you have a substance abuse problem, they put you on that agreement and showed you the things they want you to do to be safe to practice. Let’s just say, you had your license revoked because you violated the terms of an agreement, and you were an alcoholic or something like that. Well, during that period, you need to work on the addiction. Meaning, you need to go to AA, and you need to get a sponsor, you need to document all the times that you went there. I don’t usually suggest doing random drug screens. Other blogs of interest include:

They can get expensive. And I just don’t think it’s necessary. If you want to do everything possible, certainly getting a random drug screen through that entire period would certainly be helpful. I mean, if you’re going to do that, then I’d probably only do that maybe in like six months leading up to one year or two. Talk about continuing to go to a nurse recovery group or just changing lifestyles, eating better, getting into shape, and dealing with stress. Most of the time, they’re concerned that a stressor is then leading the nurse to drink for whatever reason. Another great thing to do would be counseling, so meeting with a licensed professional counselor, substance abuse counselor, psychologist, and dealing with those issues.

And normally after a period, the psychologist would then state, you don’t need to come to me anymore. Then you want to get a letter from that person stating, the nurse completed this many sessions, I don’t believe that they need to continue in counseling. And then when you reapply, you would send that letter to the board. If maybe the board wanted you to go into a rehabilitation program, maybe an intensive outpatient treatment program, then you would want to do that as well if you didn’t do that before your license was revoked. That’s kind of some strategies if substance abuse is involved. If it’s a clinical issue, it’s tougher to come back from. If you had your license revoked purely due to a clinical issue, it’s tough to rehab that, right?

Like you could do continuing education, but after a period, you’re always going to have to do a refresher course if they were going to allow you to get your license back. But really, only continuing education is about the only thing you can do if it was a continuous clinical issue or going back to school and showing success in that is another thing you can do. There are some things that a nurse cannot come back from. Usually, physical abuse towards a patient, sexual misconduct, obviously some major criminal issues that resulted in a felony. There are just certain things that if a nurse does, regardless of the time, they’re just never going to get their license back.

If it’s a high-profile case, I find the boards like I’m in Arizona for instance, there have been a few high-profile cases. And I think from the board’s perspective, they kind of feel like it would be bad publicity if they took someone’s license away for whatever the issue was. And then after 5 years or 10 years, gave it back to that nurse simply because what they did initially was, I guess so bad that they wouldn’t want to seem like they were lenient in, I guess facilitating that behavior and giving them their life license back. That doesn’t happen very often. It is rare that a nurse would do something so bad that no board would ever give them a second chance, but there are things that happen where, unfortunately, if you did one of those things that I listed, you likely may never get your license again, regardless of what state it’s in.

So, just in summary, just think of it like, alright, what led to the revocation? And then what can I do in that period to show the board that I’m taking the initiative, I’m dealing with my issues. Document everything that you’ve done because they’re going to want to see that when you reapply and just try to fix whatever the issues were. Now, if you were on a consent agreement and violated the agreement and then reapply in whatever the period is, it is almost 100% certainty that you’re going to be placed back on a consent agreement, regardless of how much you had rehabilitated over that period. They’re just not going to take the nurse work for it, and they’re going to want to see at least some level of supervision or probation for a period. And then after that, that’s when the nurse would be kind of free from any of those probationary requirements.

What Should be in a Dental Associate Termination Letter?

Can an Employer Require 90 Days Notice?
Scroll to top