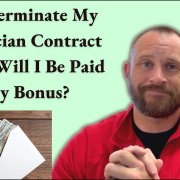 Will a physician be paid a bonus if they terminate the contract early? I think the first question is what type of bonus is the physician thinking about? Like bonuses when you sign the contract, and then there are productivity bonuses involved once the contract is ongoing. Let’s just take the signing bonus first. Almost any physician will receive a signing bonus and relocation assistance when they’re signing an employment agreement. Let’s say there’s a $20,000 signing bonus, and then the employer is going to provide up to $10,000 for relocation. Normally, there would be language in there that states if the physician leaves before the initial term ends.

The initial term is just how long the contract lasts. Let’s say it’s a two-year term. Normally, there would be language that states, if they leave early, they must pay back a prorated portion of that amount. Monthly is probably the most standard way of doing it. Let’s just say, the physician lasted a year, and then they have one year left on that two-year term, then they’d owe back half of whatever the bonus was. So, they’d have to pay back 15,000, in total. 5,000 for the relocation assistance, and 10,000 for the $20,000 signing bonus. It can also be done quarterly. Some places do it yearly. From the doctor’s perspective, the shorter forgiveness period and the shorter interval are more advantageous, obviously. If you stay for 11 months, then leave, and it was yearly forgiveness, well, you’re out of luck.

You just missed out on that whole year of forgiveness. Whereas if it’s monthly, no matter where you leave, it’s about as up to date as it can be. So, that’s one way of not getting your bonus. If you leave early or at least having to pay a portion of that back. Now, the other bonuses are productivity bonuses that a physician would receive. There are different types of productivity bonuses, and there are different types of compensation models. The two most common productivity models are net collections, mostly for private practice, and then RVU based compensation, which is mostly used by hospital networks. Let’s say a physician had a contract for RVUs and it said, any RVU generated over 6,000 in a year, you’ll make $45 per RVU, but it’s a yearly bonus. Other blogs of interest include:

There will be language in there that likely states the physician has to be employed at the time that the bonus is paid. So, there’s a possibility that there might be a window where the physician clearly earned the bonus towards the end of the year, they give notice, and then the contract is terminated before they receive the bonus and they’re out of luck. The physician really wants to make sure there’s language in there that essentially states, if they earn a bonus, they will receive the bonus no matter whether the contract is terminated early or in some way. You just really must think about that. If it’s net collections, usually, that would be hybrid where there would be a base salary and then the physician would get a percentage of what the practice collects. Let’s just say a physician has a $240,000 base.

One normal way of doing it would be the practice states, alright, after you’ve collected $20,000 in a month, so that covers your base salary, then you would get a percentage of net collections after that. A normal percentage will be somewhere between 15 to 25% in that scenario. And then it would state it’ll be paid within this many days of the end of the month, or perhaps it’s quarterly. It’s rare for it to be annual. But if it is, you want to make certain, once again, just like with the other bonuses, the shorter period where you’re paid protects you if you leave early. If you have a yearly bonus as I said, and then you leave in month 10, even if you earn that bonus, if there’s not a language in there, you’re not going to get it. So, you want to really tighten that interval. Preferably, it would be a monthly payout. You’d set the interval or whatever the level is where you’d be paid so that it would be paid out monthly.

And that way, you insulate yourself from amassing a bonus, but not ever getting it. So, those are the two main productivity ways. The RVUS, and net collection. And in the agreement, it’s going to have a termination section, and this will simply state what happens in the event either party terminates the agreement. And normally, there’ll be a section at the end of the termination section that states what happens to payment upon termination. You really need to pay attention to that language because it is going to dictate most of the time if/when and how the physician is going to receive those bonuses, the timing of them, as I stated before, whether they get it at all, even if it’s earned, but not paid out before they leave.

Specific attention needs to be paid to that section. Some places I find, try to kind of screw the doctor out of the money simply because the doctor doesn’t understand the timing of the payment or how the bonus is earned or something like that. So, really, it’s something to think about. I mean, it really feels bad to work hard, earn a bonus, and then just due to timing, not actually receive it.

Most Common Reasons for Board of Nursing Discipline

Can Surgeons Moonlight?
Scroll to top