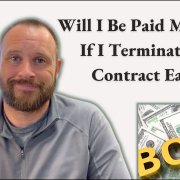 If I terminate the contract early, will I be paid my bonus? Well, I wish I had a black and white question is it depends on what the language is in the contract. Let’s walk through how the contract is terminated, and then what kind of language needs to be inserted to make certain that if someone earns a bonus, they’re going to get it. Three ways for a contract to end: one, if there’s a fixed term and it’s not renewed, say it’s a two-year contract and there is no automatic renewal, then it would just end at the end of the two years. The second one could be for cause termination.

If one party breaches the contract, the other party would have to provide them with a written notice. And then, usually, there would be a cure period where whoever is in breach of contract would have some period, usually two weeks to a month to fix whatever the breach is. And then if it is fixed, the other party could not terminate for cause. The other option would be without cause termination. For cause termination simply means either party can terminate the agreement at any time with a certain amount of notice to the other party. Kind of depends on what industry you’re in, but there should be a set amount that says, alright, you must give us this much notice in advance, and then you have to work out what it is.

Let’s say it’s 60 days. You must work out 60 days. At the end of that, you’re free to move on.  Now, how does this play with the bonus? If a professional has a bonus involving either net collections or commission or something like that, first, you need to determine how often is it paid? Is it paid monthly? Is it paid quarterly? Is it paid yearly? If it’s paid yearly, that’s obviously worse for the professional because if they terminate the contract in the middle of the year, most places will not pay out a bonus. You’ll have to wait until the end of the year and then they’ll calculate whatever the bonus is given and then they will give it out. So, if you’re thinking about how to structure an employment contract, you want to make certain that the language states that any bonus earned will be prorated if it’s less or in the middle of the contract year. Other blogs of interest include:

Even if you had the annual bonus if it says, the professional terminates the agreement and they’re in month eight, then whatever they’ve earned will be prorated to that. So, 8/12 of whatever they would’ve earned. And then, that will be paid out upon termination of the agreement. If the employer is unwilling to make any changes like that, then the professional must think strategically about when to give notice. If someone really wants to leave a job, just unhappy but you must be employed at the time that the bonus is paid, then you need to make certain that you give notice after you’ve been paid the bonus, or you could just miss out on it. I have had a couple of scenarios where there’s usually a language in a contract that states the professional must provide 60 days’ notice, but the employer has the option to basically tell them, we don’t want you to work here anymore.

They still must pay for those 60 days or whatever the base compensation generally would be. But it would say you won’t be owed any bonuses. So, even if, let’s say it’s the end of the year and so on, the bonus is supposed to be paid out 30 days after the end of the year, you give notice on day one of next year, the employer could say, you know what? We appreciate you. We’re not going to make you work 60 days. We’re just going to say accelerate the termination. We’re still going to pay you for those 60 days but just go home. The contract is ended in that scenario, it’s possible. Now, this is where the arguments would occur, but they would say, well, you’re not employed at the date that we gave out the bonus. And so, therefore, we’re just going to pay you the 60 days, but we’re not going to pay you the bonus for the rest of the year.

Once again, language needs to be inserted in the contract that protects the professional from that type of scenario where even though they waited until the next year to give notice until you get that check and that direct deposit, there are still shenanigans that the employer can use to not pay the bonus. It’s usually better to break up a bonus into months or quarters or something like that, just for that scenario. So that someone’s not stuck. Say you’re in month two of a contract year and you’re like, I must get out of here, but I still want to be paid whatever bonus that I’ve earned. It would stink to have to wait for the entire year and then finally get paid the bonus. Breaking up the bonuses into shorter segments protects the employee in the scenario where they want to be paid the bonus that they’ve earned, but they also don’t want to wait for an entire year.

So, can an employee be paid a bonus if they terminate early? It simply depends upon the language in the contract. And that’s when I’m reviewing a contract for somebody, that certainly is one thing we go over. What are the payment obligations of the employer upon termination of the agreement? Most of them will try to not have to pay any bonuses. They’ll just say, we’ll pay your base and then after the contract ends, that’s it. Now, if someone is on pure commission or net collections or whatever else in their industry that they’re using, obviously, the language needs to be tailored so that they’re paid whatever amount they should, but they’re not totally screwed by not getting any of the bonuses.

What is Occurrence Malpractice Insurance?

How Can a Physician be Terminated for Cause?
Scroll to top