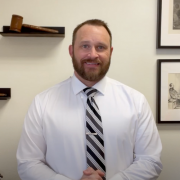 Hi, my name’s Robert Chelle, and I’m an attorney that assists nurses with board of nursing investigations. Before a nurse even needs to apply for a license with a nursing board, they also must get into nursing school. And, many nurses ask me, can a misdemeanor hurt my chances of getting into nursing school?

So, the answer is probably not, what will happen is most nursing schools will run a background check on you. And then in that ground check, it will show any criminal convictions you’ve had and then most likely any criminal incidents that led to charges, but not convictions for the past seven years. Now, in this case, I’m guessing anyone who’s concerned about a misdemeanor means they’ve and convicted of a misdemeanor. So, let’s talk about that specifically, a misdemeanor is a lower-level crime.

You have felonies and misdemeanors, misdemeanors generally end up with no jail time. It’s usually a fine, in some DUIs, in Arizona, for instance, you will get jail time, even though it’s a misdemeanor DUI, but for the most part, misdemeanors end up in probation, community service, that type of thing. So, if a misdemeanor did pop up on your background for a nursing school, it’s like they would want an explanation of that. So, one way of facilitating that is to write out a statement of what happened and then also, if it’s possible, they would want to look at the court docents. So, it might be a good idea to get those in advance. I wouldn’t give those to nursing programs unless they specifically ask for them, but it’s not a bad idea to have them for the future because it’s extraordinarily likely that when you get done with nursing school and move on to apply for your license and whatever state you’re in that the board of nursing will go through the same investigation and they will ask for the court documents.

So, it’s a good idea to have the criminal record for the school anyway.  Obviously, what the misdemeanor was will also play a role in whether the nursing school has an issue with that or not. I’d say most misdemeanors for nurses are theft, usually shoplifting, domestic incidents. So, either domestic violence disorder of the conduct, disturbing the peace, something that comes out of domestic incident between a spouse, a partner and boyfriend, girlfriend, you know, something like that. And then substance abuse related misdemeanors, DUI, public intoxication, drug possession, those probably make up like 90% of all misdemeanors that nurses have in their past. And if there’s not a pattern, you haven’t had five DUIs or an entire string of misdemeanors, then I would think that most nursing schools honestly would not care at all.

State Board Issues for a Nurse

A nursing school doesn’t want to bring in a nurse into the program when they know that whatever that nurse did will likely preclude them from getting a license that makes the school look bad. I think for the most part, the schools are fine with misdemeanors and just to move it forward. After you graduate nursing schools and move on to get licensed at a board of nursing, and I can say specifically since I deal with the Arizona Board of Nursing, I can’t think of a time where a nurse had one or two misdemeanors in their past and they didn’t end up getting a license in one way or the other.  It’s when you get into felonies that the boards take a much higher level of scrutiny and then depending upon the timing of the felony could, could stop you from getting a license.

How to Report Someone to the Indiana Board of Nursing

How do you Terminate a Physician Contract Without Cause?
Scroll to top