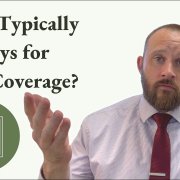 Who typically pays for tail coverage?  To talk about tail coverage, we need to talk about underlying malpractice policies as well. We’re going to hit both of those. First, when do you need tail coverage? There are three main types of insurance for physicians. If you’re with a large hospital or healthcare network, they may be self-insured. And in that scenario, you usually would not need tail insurance. If you have an occurrence-based policy, it just means a policy must be in effect when the malpractice event occurs, you do not need tail insurance for that as well. And then the third is claims-made. Under a claims-made insurance policy, a policy must be in effect when the claim is made.

And since you could terminate your relationship with that employer, there’s going to be a gap in between the date of termination and the last day somebody can sue you. That’s called the statute of limitations. In most states, it’s two years. Now, two years from when the patient either knows or should have known of the malpractice event. Sometimes, it can go past two years. A tail policy is simply coverage that covers that gap in between when you leave and then the last day somebody can sue you. Why would an employer use claims-made versus occurrence? Let’s just say it’s a private employer. We’re just going to assume hospitals are self-insured. In this scenario, let’s just talk about a private physician practice. If they must choose between occurrence and claims made, 9 times out of 10, they’re going to choose claims made because it’s cheaper.

An occurrence policy is generally around a third more expensive per year for a physician. But as I said before, tail insurance is not necessary for an occurrence policy. A claims-made policy, if they’re cheaper than an occurrence-based policy and the employer is going to make the physician pay for tail coverage, it’s just simply cheaper for them in the long run. And that’s why they do that. The premise of this blog is who typically pays for tail insurance. If you are a physician who does shift work, let’s say hospitalist or ED, it’s almost always the physician who is going to pay for your tail. If you work for a hospital and they’re not self-insured and they just have a claims-made policy, it’s extremely rare, maybe one time out of a hundred would the physician have to pay for tail insurance. Almost any time, a physician is employed by a hospital or health network, the employer’s going to pay for your tail. Other blogs of interest include:

If you’re in private practice or an employee of private practice, 9 times out of 10, they’re going to have claims-made coverage. And then, I’d say, probably 50% of the time, maybe a little bit above that, the physician is going to be the one that must pay for tail. Is that fair? Well, I mean, it’s just a matter of negotiation. Tail costs about twice what your annual premium is. Let’s just take a primary care physician, their annual premium is usually somewhere between $6,000 to $8,000. If the physician had to pay for tail, just multiply that times two. So, it would be somewhere between 12,000 to 16,000. They’d have to pay for the tail coverage. That’s a one-time cost. It’s not like every year you have to pay for tail. It’s just a one-time fee when the contract terminates, and then you’re covered for either the entire gap normally, or sometimes, it’s a specific period and you obviously want to get a policy that goes well past the statute limitations.

It’s really specialty dependent upon whether this is a huge deal or not. If you’re in primary care and you have to pay 12,000 for tail, yeah, it’s probably annoying, but it’s not going to break the bank for you. If you are an OB-GYN and you have a $50,000 annual premium and you must pay a hundred thousand dollars for tail insurance, well, that’s something completely different. And so, negotiating who must pay for tail could be the key point in the negotiation for an OB-GYN. You must do the math on this. If you can increase your base salary by 15,000 versus negotiating with the employer paying for tail, well, that’s a no-brainer. You’re going to get that 15,000 every year. And that’s worth much more than just having a one-time $15,000 cost for tail.

If you are going to try to negotiate who pays for the tail, you need to do that prior to signing the employment agreement. Usually, the employer will send the agreement, the physician will look it over. If they’re smart, they’ll have an attorney review it. And then we’ll come up with a list of things that we need either clarified or that we’re going to ask for. And in that scenario, we figure out what is most important to the physician, and then kind of situate the counteroffer based upon that. Every situation is different. Some things are more important to a physician than others. Maybe some physicians absolutely need the non-compete amended because they cannot leave the area once the contract terminates or maybe a bonus is most important to a physician to help them pay for a down payment on a house. Or in other cases, if they’re, as I said before, an OB-GYN, and they don’t want to pay a hundred thousand dollars when the contract terminates, that might be the most important thing to them.

Two other considerations, one, if you’re with an employer and you must pay for tail, but you move to a different employer that utilizes the same insurance company, usually, that insurance company will allow you to roll over your old policy into your new one avoiding having to pay for tail. Now, there’s no way you’re going to know that when you start a job, and that your next job is going to have the same insurance company, but that’s one way of getting out of paying for it. The other way would be having your new employer pay your old tail, that’s called nose coverage. In nose coverage, it simply would be a negotiation with your new employer that says, once the contract terminates with your current employer, they’re going to pay your old tail or reimburse you for whatever you paid for. Nose coverage doesn’t happen very often, but it certainly does. And it’s a possibility for a physician. So, who typically pays for tail coverage? I’d say, typically, it’s the physician but it’s not completely out of the ordinary for a physician to be provided as well. It’s just a point of negotiation.

What is the difference between an IEP and a 504 Plan in Arizona?

What are Restrictive Covenants in a Physician Contract?
Scroll to top