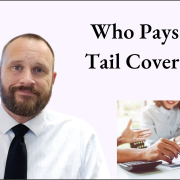 What Type of Coverage Do You have?

Second, what type of coverage do you have? In this scenario, it’s going to be either occurrence-based coverage or claims-made coverage. In the claims-made policy, you do need tail insurance, and the contract is going to state who is responsible to pay for the tail insurance once the contract ends, or at least it should. So, that is the very simple answer. Who has to pay for tail insurance is dictated by the language in the contract. Now, if you’re working for a large healthcare network or hospital and they’re self-insured, then you’re not usually going to have to worry about tail at all. If you have an occurrence-based policy, tail insurance is not necessary. The only time the provider has to pay tail is if they work with a smaller provider-owned group.

Who Pays for the Tail?

If it’s like a two-provider practice, you’ll almost always have to pay for your own tail. What’s important is the details, as always. First, do you have to purchase tail insurance from the company that is providing the underlying coverage? You can shop for tail insurance, and you could theoretically find a better price somewhere else. So, you want to have other options available.

How Much Does Tail Coverage Insurance Cost?

Now, how much does tail cost? A good rule of thumb is tail is about twice what your annual premium is. The underlying annual premium varies, I guess, widely from specialty to specialty. Maybe a nurse practitioner would be $2,000 a year, whereas you could have an OB-GYN who’s paying 80. It really can fluctuate greatly between specialties.

You need to find out what your annual premium is, and then that way, you’ll be able to get a quote for what the tail cost would be if you are responsible. It is not a yearly payment; you just have to pay it before the contract ends. And then the contract may even state if you have not secured tail coverage before your last day of employment, the employer can withhold money from your last paycheck to cover the tail cost, which most people would not prefer. So, make certain that the language is favorable to you and that it does say, if you have not secured the coverage by your last day of employment, they still can’t withhold anything from your wage or potential bonus or something like that, so you aren’t getting screwed if you are responsible for paying for tail, especially in that smaller practice scenario.

There are a couple of other things to think about. One, there is what’s called nose coverage. And that’s when your new employer pays your old tail. You can think of that as a quasi-signing bonus. And many times, if you stay with the same insurer, let’s just say you’re with one company. Then you leave a practice and move to another practice that utilizes the same insurance company. Most of those will just roll over your old policy into a new one, and you won’t have to pay for tail at all. So, that’s who has to pay for tail insurance. It’s simply dictated by what the language states in the employment agreement or independent contractor agreement. That’s it.

How long does malpractice tail insurance last? So, if you’re a healthcare provider and you need malpractice insurance which you’re going to need, there are three types of coverage.

One, if you work for a large hospital or healthcare network, many times they’re self-insured, so you’ll fall under their self-insurance policy, and it’s very unlikely tail insurance would need to be purchased by the provider. The other two will apply if you work for a small physician-owned group or even a solo practice. It’s going to be either occurrence-based coverage or claims made. With occurrence-based coverage, you do not need tail insurance. It simply means a policy has to be in effect when the event occurs.

The difference between occurrence and claims made is price. Occurrence-based coverage is usually about a third more expensive than claims made. Now, if you have a claims-made policy, then someone is going to need to purchase tail insurance, which will be listed, meaning whose responsibility it is to purchase tail insurance will be in the employment agreement. It will state explicitly. Upon the termination of the agreement, either the employer will cover the cost of tail, or the provider will be responsible for covering the cost of tail. Tail insurance is about twice what your annual premium is. Let’s say you’re a primary care physician. $6,000 is an average amount for your annual premium. If you had to pay for tail, it would be about twice that. So, $12,000.

Now, how long does tail insurance last? It depends upon the type of policy that you purchase. In most states, the statute of limitations on a medical malpractice claim is two years. Meaning the person who had the event happen to them has two years from where they know or should have known of the malpractice event. And if they miss that window, they cannot sue the provider. There are some exceptions for minors, and they can sue until they reach the age of maturity, but I’m not going to get into that right now. You’ll have the option to determine how long you want the tail to last. For most policies, it would be a minimum of at least the statute of limitations period in the state. So, two years. However, it makes sense to extend it because what could happen is you’re responsible for tail, you buy that two-year policy, and maybe, as I said before, if it was a minor or something happened, they could sue you all the way up until they’re 18.

And then you get a claim 10 years down the line, there’s no coverage for it, and you are out of luck. So, I suggest buying the largest length of time, and you can buy an indefinite tail policy. Just to make sure you have peace of mind, if something did happen well down the road, you’d still be covered. Now, it will be more expensive, and as I said before, on average, it’s around twice what your annual premium is. The longer you extend the period, the more expensive the tail will be. Let’s say you had an indefinite tail period. Well, what will go into that cost would be your claims history and then, obviously, how much it costs to insure you on an annual basis.

It’s a one-time cost, so you don’t have to pay for it every year, meaning if you got an indefinite tail policy, you don’t have to pay every single year for tail. You only pay one amount upfront, and then you’re covered for as long as the tail policy lasts. It may be a little bit more expensive to get coverage that lasts longer, but I can promise you it is well worth not having to worry about any claims in the future. So, that’s a little primer on how long tail insurance lasts.

How Long Does Malpractice Tail Coverage Last?What Happens If You Quit a Job Without Notice?
Scroll to top