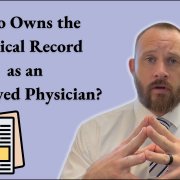 Who Owns the Patient Information?

If there isn’t a language of who owns the medical record, then there could be a dispute if the physician leaves, takes the records, and then attempts to take the patients as well. And then there are also considerations about continuity of care and the storage of the medical record as well that must be thought about. Let’s kind of break that down. First, when a physician leaves a practice, let’s just take primary care for instance. If a physician works as an employee for a primary care practice and they decide to leave for whatever reason, that practice will then send out a notice to all the patients stating, Dr. Smith is leaving the practice.

We will provide a new physician if you’re interested. If not, you can pick up your medical records at this location, with some type of written notice or something like that. The physician, once again, if they’re primary care and they decide to stay within the area, the physician will also have non-compete, which will then prohibit them from working within a certain period after the contract terminates within a certain geographic distance from the practice itself. Let’s say the physician wants to stay in the area. They’re outside of the non-compete so they’re not violating it. They open their own practice. They can’t just take all the medical records of their patients with them. Their past employer owns the record. Now, obviously, they’re the patient’s record. Other blogs of interest include:

So, the patient, always in any state, there’ll be something in that state’s law or statutes that go through how a patient can properly obtain a copy of their medical record. In this case, if the physician left the practice, opened their own practice, it will be on the patient to then request a copy of their medical record if they wanted to move with the new physician. And then they can either ask that practice to send their records to the physicians who left their new practice, or they can just go ahead and get a physical copy themselves, and then take that to the new physician. If you’re an employed physician, you do not have a legal right to take all the medical records with you. And I would suggest not doing that.

Are Physicians Entitled to Practice Records?

It opens liability for the physician, and it’s just bad practice. Now, for continuity of care purposes, when a physician leaves a practice, generally, there’s a notice period. Let’s say the physician wants to leave and move on to a new job. Usually, they must provide either 60- or 90-days’ notice to their employer that they’re going to leave. One of the reasons why that notice is required is to make certain that there is continuity of care for that patient. A new provider is either set up or will assume the care of that patient. If there isn’t a provider to refer them to, then they refer them outside the organization to someone else. Prescriptions need to be taken to account as well if bridge scripts need to be given until that patient finds a new provider. These are all things that must be considered when a physician leaves the practice. But the medical record must stay with that employer. The problems that arise are if someone who’s leaving the practice physically takes the records if they’re paper. Nowadays, obviously more and more charts are electronic with all the EMRs out there.

Or they could somehow get access to the medical records, download all of them, and then take those with them to the new practice. There are generally non-solicitation clauses in the employment agreement, which would prohibit that physician from actively going out and reaching out to their patients and letting them know that they’re leaving or asking that patient to come with them. So, there’s sometimes language in the non-solicit that would state that the record is a part of that as well. So, who owns the medical record? The employer does. Not the physician.

Why is this important and what does it prohibit? Let’s start with patients. The non-solicitation clause will simply state that for a time, usually one to two years, the physician can’t actively solicit the patient, meaning they couldn’t, let’s say download a list of all of their patients with the email addresses or phone numbers or whatever, and then blast out an email to all of their patients stating, I’m leaving the practice, I want you to come with me, here’s my new address, get your medical records and move to my practice with me. The non-solicitation clause would prohibit that. The biggest fear of almost any, at least smaller physician-owned practice is to bring in a physician, and then that physician will establish a relationship with all the patients, build a patient base and then leave, take all the patients, take the employees, and then compete against them.

That’s an obvious fear. And so that’s why the non-solicitation clause is in there, to prevent that type of thing. Now, what does this not prevent? Well, I guess you must think about what is soliciting. Is just general marketing soliciting? I would say no. Most non-solicitation clauses don’t get into the breakdown of what is considered soliciting or not. It’s more of just kind of a general you can’t solicit them, but what this normally wouldn’t prohibit would be normal marketing, not targeting your specific patient base like billboards, newspaper ads, although news alerts are not that great effective mark marketing tactics in 2022, electronic communication like Facebook ads, Google ads, announcements on social media, that type of thing. Normally, if it’s broadcast broadly and not to the specific population, those would not be considered solicitations.

Ninety-five out of a hundred contracts will not define what that is. Now, if you are in the office, you’ve given notice to your employer, you’re seeing your patients and they say, hey Dr. Smith, I hear you’re leaving. Where are you going? It’s not soliciting if you just say, I’m leaving, I am going here. There’s the information. A non-solicitation clause cannot prevent a patient from coming with a physician to their new practice. You can’t dictate who someone’s healthcare provider is. And if a patient wants to come with a physician who’s leaving, that employer cannot prevent that, but they can prevent the physician who’s leaving from going after them actively. Another part of a non-solicitation clause will be employees. Now, if the employer is savvy, they will say, you cannot hire an employee, not just solicit them.

Once again, soliciting would be actively going after somebody. So, sending a text or an email or a phone call or talking to them and saying, hey, I’m leaving. I want you to come with me. I want you to be an employee of my new practice. Quit, come with me. The non-solicitation clause could prevent those activities from going after that employee, once again, they couldn’t absolutely prohibit that employee from leaving and going to the new practice unless the language states you cannot hire any employee from this practice. Usually, it would also state time limit. For instance, it would say, anyone who’s been employed by the practice over the last 12 months, you can’t actively solicit them. Or as I said before, if they’re savvy, it will say you cannot hire them.

I just represent physicians on that side. But if I was representing an employer, I would certainly tell them, don’t just say solicit. I would say, put a language that says do not hire. Independent contractors, business vendors, that type of thing. If you want to use the same vendor for similar services, that’s fine. But you just can’t actively divert that person from the old practice and then independent contractors as well. You couldn’t just ask them to leave the old practice and come with you. If they offer a service that both practices can use, then generally, that’s okay. There’s going to be a non-solicit in most contracts. Now, this is also specialty specific. So, if you think about it, obviously, if you work in the ED, hospitalists, ICU, like any kind of shift-related position where you’re just providing care to what’s in front of you, you’re not going to ever solicit those patients.

Maybe you have some frequent flyers in the ED, but certainly, you’re not going to want them to come with you to a new ED. This is targeted towards people with a solid patient base like pediatricians, primary care, cardiology, those types of specialties. Is it fair? Honestly, yes, certainly it’s fair. And as I stated before, an employer’s worst nightmare is that they bring in a new physician, that physician leaves and takes all the patients. So, I think, yes, it is fair, but as I said before, they can’t completely prohibit a patient from coming with you or coming with a physician to wherever they’re moving to if they stay in the area.

What is the Difference Between Claims Made and Occurrence Malpractice?

What Should a Physician Offer Letter Include?
Scroll to top