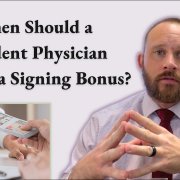 When should a resident receive a signing bonus?  The timing of it is important. When a resident is finishing up training, they’ve likely already signed an employment contract, or more importantly, when they’re negotiating the employment contract, usually in their early PGY-3 year, some PGY-2, when they receive the signing bonus is important for a couple of factors. One, as a resident physician, they simply don’t make a lot of money. And so, if they’re training in New York and they get a job in California, depending upon how large their family is, it could be a substantial amount of money to move all the way across the country.

Now, almost every employer that someone signs with as a resident is going to offer relocation assistance. Usually, between $5,000 to $15,000. You won’t see above $15,000 as far as relocation assistance goes. Somewhere along there, they should pay for the entire amount, to be honest. And some people who are moving a short distance can also use the relocation assistance money for, let’s say, travel to go back to the city, to look for an apartment or a home. So, airline lodging, all that kind of stuff. Some people can use that money to go towards either a security deposit or maybe the first couple of months’ rent. Most employers are flexible in what the physician can use that money for. But they want it to be housing-related, or relocation-related in some manner.

Now, the timing of when you get paid is important. Usually, the physician will be offered two different bonuses. One would be the relocation assistance, as I said before, somewhere between 5,000 to 15,000, and then, they’ll also be offered a signing bonus, which usually is paid out during their first pay period. Whenever they get paid first after they start with the employer, that’s when they would receive the bonus. There’s obviously a different way of doing it. Now, most of the time, an employer will say, unless it’s a big hospital network that has established relationships with moving companies, let’s just say you’re running a private practice. Then they’ll basically say, pay your moving expenses, submit us the receipts, and then we’ll reimburse you. Well, for some people, outlying $10,000 to $15,000 to move is difficult simply because as I said before, you’re not a wealthy doctor when you’re still in training. Other blogs of interest include:

So, what we do is, we kind of assess the situation for the physician and then we determine, alright, is it helpful if you get this prior to moving? How soon before you’re done with training do you need the money? And we can say to the employer, hey, look, it will really help us defray the cost of the move if we receive this prior to moving. Or more importantly, maybe the employer would be willing to pay the amount directly to the moving company. In that way, there’s no outlay of cash by the physician, which is kind of the entire point of that. The signing bonus can also, the timing of when that’s paid can be important as well. Depending upon the size of the signing bonus, sometimes we can say, alright, we would like half upon execution of the agreement.

So, when you sign the actual agreement and it’s signed by both parties, that’s called the execution of the agreement. And many times, we can say, we’ll get half upon signing. And then the other half when they start. And then both bonuses are going to have a repayment obligation tied to it. At least it normally would. Meaning, let’s say the physician has a two-year initial term. The employer will state, if you leave before the two-year initial term, you’ll owe us a prorated portion of the bonuses back. It could be quarterly forgiveness, monthly forgiveness, or yearly forgiveness. Let’s say someone was given a $30,000 signing bonus. And then, they say, alright, half of it is forgiven after the first year. And then, the other half is forgiven after the second year. So, if the physician left between the first and second year, they owe back $15,000. So, the employer is insulated from the physician, simply taking the bonuses early, and then, kind of splitting out on the job by signing the agreement in advance, and then there’ll be language in there that talks about the repayment obligations. If the employer is expressing concerns about that and maybe they just simply don’t utilize that, that would be a good way of saying, well, look, if you’re concerned about me, just take the money, and leave.

Then let’s put in these repayment obligations and therefore, you’re protected if I were to leave. And then I benefit by getting the money in advance. So, that’s a discussion of when the resident should receive the signing bonus or relocation assistance. It’s just dependent upon the situation for some people. It’s fine receiving it after the fact. But for others, it’s important to have it upfront. Just some things to think about.

What Should be in a Telehealth Contract?

What is Mediation in a Physician Contract?
Scroll to top