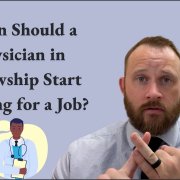 There is absolutely no harm in going out and seeing what the market has to offer. If you are in fellowship, then you are likely in a specialty that is in high demand and will probably have an easier time finding a job. However, obviously the opportunities are less when you are in some kind of subspecialty. Kind of how I would go about looking for a job, one, you need to find the area where you want to live. If you’re completely open to living wherever then you can generally find a great deal if you are kind of absolutely have to live in a specific area, maybe due to a significant other, maybe you’re involved, engaged, married to another physician training, and then you need to follow them, or they’re in a program and are gonna start and you need to be there as well. Other blogs of interest include:

Well then obviously that limits your options if you’re in one specific city. But if you’re wide open, you will have more opportunities. But as far as the timing of when to look, do it right away. Now, what are the downsides of identifying a position and signing a contract? Let’s say you’re in a three-year fellowship, you sign a contract in year one, circumstances can change, right? So you could have some family issues, an illness in the family, maybe you had kids in the interim and that changed your thinking of where you want to be, maybe you were planning on moving back home and then decided that you didn’t want to do that. So, there are complications if you sign an agreement and then want to back out of it, it’s not impossible to get out of it.

When Should Fellows Start Applying?

I mean, no one’s gonna want to employ a physician that absolutely doesn’t want to be there, but there may be some kind of legal complications associated with terminating a job that you haven’t even started yet. In my experience, the sooner, the better. Ways of finding jobs, obviously, communicating with people in your residency program, obviously other physicians in your fellowship across the country, physician recruiters are a good place to start. There are employers that hire recruiters to go find specific candidates. You can reach out to the recruiters, you won’t have to pay anything. The employer will have to pay that fee. Those are all good options as far as how to find a job.

Residents and a Job Search

When should a resident physician start looking for a job? This is a complicated question. First, I do contract reviews every day for physicians and a large percentage of them are individuals getting their first jobs who’ve never had an employment contract before. They’re either in their last year of residency or last year fellowship and they have an offer that they want me to look over for them. There are occasions where there’s a multiple year fellowship or, they are a PGY-2 or something like that, where they already have an offer that won’t begin for two years, and they want me to look at that as well.

Let me just give a couple words of wisdom, just from doing this for a couple decades now. One, if you are a resident or a fellow and you know absolutely where you need to be geographically, maybe you have to move home, maybe you have a significant other that maybe is completing trading themselves somewhere else, want to move close to family, whatever it is, if you have a pinpoint location in mind, it is probably a good idea to get started sooner than later. Meaning start looking for a job when you still have two years left in training. Think of it from an employer perspective. There are employers who don’t have immediate needs for a physician, right? So, if they run well, then they’ll have financial forecasts.

Forecasts as far as what the patient load is going to be, perhaps the practice is expanding and opening a new office, but they’re not going to open it for a year. I guess what I’m saying is, employers know that they’d have a need for a physician, but sometimes, it’s not for a couple years down the line. That’s why an employer will start looking immediately for a position that’s not immediately available. Once they get out there and they kind of see some candidates, and even if that candidate has two years left in training, it’s not uncommon for them to offer them a position and have them sign an employment contract. One benefit of looking early is just simply getting in before someone else takes the position. And so, the earlier that you look at the position, the more likely you’d have a chance to get it, if that makes sense. Next, the downsides of going early.

What’s the negative part of finding a position kind of far out from when you are done with training? Well, obviously, if you sign an employment agreement that doesn’t commence for two years, and then you have change in family, maybe the significant other that was supposed to move to one city is now moving to another, or there’s a sickness in the family. I mean, there’s a million things because at one point, a location is perfect and then two years later, it’s not. The downside of signing early is that things may change in your life, but you have signed the employment agreement. Then it gets into: how can I terminate this agreement even before I’ve started? Are there any penalties associated with it? Some contracts have built in that if the physician doesn’t start, they will owe penalty.

I would suggest that before signing an agreement that has that kind of language in it, you should probably get it reviewed by someone to go over the ramifications. What happens if I sign the agreement, I either can’t start or don’t want to start and then need to get out of the contract? Another possibility is you sign early and then you get a better offer. So maybe it’s just a better opportunity for you. The compensation is more, the benefits are better. Kind of the always concern is that if you sign a contractor early, you’re foregoing any potential opportunities down the road. Now, some employers are okay with letting someone out with enough notice. The contract will have a notice requirement, but if you haven’t even started, most employers are understanding. If there is actual change in family circumstances. They’re not as forgiving if it’s just simply, this person is paying me more than you, I don’t want to complete the terms of this agreement. What’s the contract signed, the employers relying upon you to start, so they’re going to stop recruiting anyone else. They’re going to make plans to either bring in more volume for patients or maybe the office that they’re opening is contingent upon you being there.

So, I guess there are problems for both sides if the physician doesn’t want to start, the employer really could have some damages associated with the physician not completing the terms of the agreement. Overall, I’d say the sooner, the better to start looking, however, just taking the first offer, and signing an employment agreement without comparing different offers is a bad idea. There are almost always multiple opportunities for somebody and just to accept the first one and just because they are the first one doesn’t make a lot of sense to me. So, I would suggest that you look at multiple offers, kind of gauge the compensation structure amongst them, and then kind of go from there.

What are the different types of contracts physicians can sign? Basically, there are two: You have an independent contractor agreement, and then you have the employment agreement. So, what are the differences between the two? An employment agreement means there is an employer, and the physician is an employee. They are a W-2 employee, meaning taxes are taken out of whatever compensation they have. And then the employment agreement will kind of go through the general terms of the relationship. How long the contract lasts, how it’s terminated, how they’re compensated, the liability insurance, restrictive covenants, non-compete, non-solicit, that type of thing. In an independent contractor agreement, you are not a W-2 employee. You’re a 1099 employee, which means, no taxes are taken out of whatever the physician is given via compensation.

When Should a Physician Resident Start Looking for a Job?

Can a Physician Back Out After Signing an Offer Letter?
Scroll to top