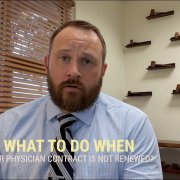 What should a physician do if their contract is not renewed? This honestly doesn’t happen that often and we should probably define what is either not renewed or the contract is actually terminated. So the vast majority of physician contracts will have some kind of automatic renewal provision. For instance, let’s say you sign a contract. It has a two-year initial term. There’s usually some language in there that states, if it’s not terminated, the contract will simply automatically renew for another year and then it would just continue in perpetuity until one of the parties terminates the agreement.

I’ve had physicians come and say, they don’t wanna renew the agreement. What should I do? And this might be a stupid answer. It’s to find a new job. They’re like, well, I kind of wanna fight for it. And that type of thing. Look, if you’re in a job and the employer doesn’t want you there, do not stay there. It makes zero sense on a personal level. It will be very awkward. The employer will find ways to get out of the agreement, or they’ll just give the without cause notice and move on. We also do license board defense when an employee is either disciplined or maybe the employer filed a board complaint. And that person says, well, I don’t want to leave.

I wanna stay here, fight whatever they’re doing. The employer will find a way, one way or another to get rid of that employee. And it will only cause more pain for the employee moving forward. So going back to the original topic of what to do, if it’s not renewed, you find a new job. That’s it, it’s hard. Sometimes it’s hard to say, well, why wouldn’t they wanna renew the contract? What did I do wrong? Probably we’re finding out why. Most of the time, it’s just production either. The physician just simply didn’t produce what the employer’s expectations were. Now, most of the time, the volume issue is not the fault of the physician. It’s a lack of marketing, a lack of referrals. Maybe the staff is poorly trained. Doesn’t do a good job of providing solid patient care experience.

There are a number of reasons why someone’s volume won’t hit expectations, but it’s not, or it’s usually, not just the physician simply is too slow. Doesn’t wanna see the number of patients that are expected. So hopefully that was helpful as far as what to do. If your contract’s not renewed, find a new job.

What are Different Types of Physician Contracts?

What are the different types of contracts physicians can sign? Basically, there are two: You have an independent contractor agreement, and then you have the employment agreement. So, what are the differences between the two? An employment agreement means there is an employer, and the physician is an employee. They are a W-2 employee, meaning taxes are taken out of whatever compensation they have. And then the employment agreement will kind of go through the general terms of the relationship. How long the contract lasts, how it’s terminated, how they’re compensated, the liability insurance, restrictive covenants, non-compete, non-solicit, that type of thing. In an independent contractor agreement, you are not a W-2 employee. You’re a 1099 employee, which means, no taxes are taken out of whatever the physician is given via compensation.

What Should be in a Physician Contract Termination Letter?

How to Negotiate a Physician Contract
Scroll to top