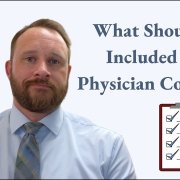 One broad question is what should be included in a physician contract? Well, obviously a lot, but let’s go hit the highlights of what should be included in every physician contract. Keeping in mind that each physician has their own kind of needs and wants in their specialty dependent, but we’ll just kind of hit the main points that should be in any contract. One, what are the terms of the agreement. How long does it last, how is it renewed, and then how is it terminated? The ‘how is it terminated’ part is extraordinarily important. You can terminate the contract by mutual agreement or the term could end and it’s not renewed. It could be terminated  for cause.

Meaning, someone violates the agreement, or lastly, and this is the most important part: without cause termination. Meaning, any physician contract should have some kind of without cause termination that allows either party to terminate the agreement with a certain amount of notice, usually 60 or 90 days. If you’re on an employment contract and you’re not a J-1 waiver employee, if your employment contract does not have without cost termination, do not sign the agreement. You absolutely do not want to be locked into a job that you 100%  hate working at or going to every day. And you’re stuck for a term, one year, two years, three years. So, you need the ability to terminate the contract if things are not going well. Unfortunately, every job may look amazing from the outside, but once you get into it and are working there and are there every day, things can change. Other blogs of interest include:

If that’s the case, then you need to be able to get out. Anyway, that’s about it as far as the termination of what needs to be in there. The compensation obviously needs to be included, if it’s productivity, computation, how is it calculated either RVUs or net collections, how is payment handled after the contract is terminated at the restrictive covenants, the non-compete, the non-solicitation agreement, non-disparagement. All of the terms of that need to be included as well. A couple of things about the non-compete that sometimes is missing are, one, it needs to identify the specialty. Some physicians are either double-boarded or maybe IM but working as a hospitalist. The specific specialty of what you’re doing for the employer should be included. How long it lasts, usually a year, sometimes two, but to be enforceable most of the time, one year is considered reasonable.

What’s the geographic limitation? Is it five miles, 10 miles, 15 miles? And then more importantly, what is it attached to? Is it just your primary office location? Is it a hospital? Is it multiple hospitals? Is it every facility that the health network or hospital owns? These are absolute details that need to be worked out in any physician contract, they need to be included. A couple of other things that need to be included are sometimes benefits. Some employers will have a benefits summary, like a PDF that lists all of the benefits they have: Health, vision, dental, life, disability, retirement, do they pay for your dues and fees? How much do they pay for your CME? All of that. The specific details like the health plan don’t need to be included in the employment contract, but signing bonus, relocation assistance, how much time off you get, are the things that most likely should be included in the employment agreement.

The bonuses absolutely need to be included or maybe an offer letter, at least. Then, finally, kind of the miscellaneous provisions, what state law applies, how do you give notice, can you assign the contract? At the end of every contract, there’ll be a section of like 15 to 20 small paragraphs that go through a bunch of different things. And you need to look at all of them. Many of them won’t make sense to a non-attorney but they’re important to be in there as well. I’m not gonna go through all of those right now, though. So, those are the broad strokes of what should be included in a physician contract. Obviously, I think it’s a great idea to have an attorney review your agreement. You can assign a contract that’s worth, in some cases over a million dollars depending upon salary. Just makes sense to have a professional look over, make sure that you’re covering all your bases.

How Long are Most Physician Contracts?

How long are most physician contracts? It varies greatly, but usually, somewhere between one to three years is a normal initial length of a physician contract. However, and this is the important part, is that nearly every physician contract, except for a J-1 agreement, can be terminated without cause which means either party can terminate the agreement with a certain amount of notice to the other. The entry standard is between 60 to 90 days. So, even if a physician has, let’s just take for example, a two-year contract. If it has a six-day without cause termination clause in it, it’s a 60-day contract effectively.

There are also some considerations if the physician decides to terminate the agreement without cause. One, are there any repayment responsibilities? Let’s say a physician has a three-year initial term and they were given a signing bonus, relocation assistance, maybe student loan repayment. There usually would be language that states that if they terminate the contract before the end of the initial term, they will owe repayment on those bonuses. And usually, it’s prorated. It’s not an all-or-nothing thing. For instance, since we’re using a three-year term, they would say one third is forgiven each year. So, if you had a $30,000 signing bonus, 10,000 year one would be forgiven, 10,000 year two. And then let’s say you left sometime in between the second and third year. Then you would owe them back $10,000. Who pays for malpractice insurance, if the contract is terminated without cause, the restrictive covenants will apply?

Honestly, the initial term is not that important. Most contracts also have language in them that states that the contract will automatically renew for one-year terms after the initial term expires. That’s standard as well. Rarely would a contract just end. It would always automatically renew. If the contract just has a fixed term, meaning, it will not automatically renew. Then, usually somewhere between 60 to 90 days before the end of the term, the parties would get together and then discuss if they want to continue or not. As a physician, continuity of care is important and that’s why they have notice termination provisions in the contract, so that a physician can’t one day state, hey, I’m leaving.

I won’t be in tomorrow. Obviously, if they have patients scheduled, or if they need to offload all of the patients, new providers, some kind of notice needs to be provided to make that a smooth transition and assure that continuity of care is being provided to the patients. So, as far as how long a contract is, as I said before, one to three years. However, almost any physician can get out of the contract with a certain amount of notice. If you have any questions about a physician contract, maybe you’re entering into a new agreement, you’re coming out of training, or perhaps you’re in a current agreement and you want us to look at the contract.

Biggest Legal Mistakes Made as an Independent Contractor

I mean, honestly, the reason why some of these practices only utilize independent contractor agreements is so they can avoid paying employment taxes. These are essentially quasi-employment agreements. The physicians kind of act as employees, their schedules set for them. They’re using the employer’s facilities and supplies and staff. However, if a physician isn’t an independent contractor, then generally what they would do is create an LLC and then they would run all of the payment through the LLC bank account. They would also be able to deduct the expenses, all the things that I went through before licensing CME, malpractice, insurance, tail, all that kind of stuff as well. I mean, if I had to weigh one versus the other, well, usually, if the physician does have the choice between the two, it would kind of depend upon the compensation structure of whether it would be worth it or not to accept an independent contractor agreement.

If it’s based purely on net collections, sometimes it is more lucrative to be an independent contractor, but if I must give a percentage of which way a physician ultimately benefits more in the end, it’s probably like 80/20 employment agreements because all of the things that the independent contractor has to pay for, are provided by the employer, add up over time. Then another thing to think about is some individual physicians simply can’t get some of the things that a larger employer can. It’s difficult to get individual health insurance for feeling it’s expensive and then all the other things, vision, dental, life, disability, malpractice, tail insurance, that stuff adds up quickly. Anyway, if a physician’s kind of debating between the two, I wish I could give a better answer besides it. It depends, but that’s kind of an overview of whether physicians are independent contractors or not. Just depends upon what kind of contract they signed.

How to Negotiate a Physician Salary

What is a Physician RVU?
Scroll to top