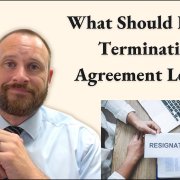 What needs to go in a termination letter from an employee?  If employees decided they no longer want to work for the employer, what to put in that letter? First, we have a few things to talk about as far as terms and termination. The term is the length of the contract, and it should be specified. It could be one year, two years, or three years, and then there’s normally a language that would say it would automatically renew for a one-year period after that. More and more, there are evergreen contracts, which just means there’s no initial term specified. It just says the contract goes on forever until terminated by either party. The first thing to identify is what’s the term.

Now, after that, you need to identify how to terminate the contract. In any employment contract, there are a couple of ways it can be terminated. One, if it’s a fixed term, so if it’s just two years, no possibility of renewal, it ends, and that’s it, it’s over with. You don’t even need to send a letter. Then, mutual agreement. If both parties just approach the other, and like, this isn’t working out, we don’t need to give notice, let’s just move forward. You don’t need a termination letter there. For cause means someone is in breach of contract. The contract will usually require written notice saying, hey, you’re breaching the contract. And then there’ll be what’s called a cure period, which just means there’s a period for the employer to fix the breach or the employee. And if that breach is fixed within that period, it’s usually somewhere between 15 to 30 days, then the contract reverts, and the party couldn’t terminate for cause.

In that case, if there was a breach of contract, let’s do this from the employee’s perspective. They would first send a written letter that just states you are in breach of contract due to this. And then if there’s cure requirement, you have 15 days to fix this breach. If the breach is not fixed, then it’s basically the option of the employee to exercise immediate termination. In that scenario, the employee would then send another letter that just simply states you fail to fix the breach, I’m terminating the contract immediately. Thank you. And that’s it. Once again, you need to, in the initial letter, state the reasons for the breach of contract, and then in the second letter, if they failed to fix the breach, just state, hey, you didn’t fix this, I’m moving forward. Other blogs of interest include:

You don’t need to put a list of grievances or all of the problems with the employer. You just simply say you breached; you didn’t fix it. And give the details about what the breach was and then just move on. Now, that’s rare. The most common way a contract is terminated is what’s called without cause. Almost any employment contract will be statement that just says if either party wants to terminate the agreement at any time, they can do so with a certain amount of notice to the other party. 30 to 90 days, anywhere in between, that’s standard for without cause termination notice.

In that scenario, that’s where the termination letter would come into play. Let’s just say the professional has a 60-day notice. They write the letter, they say per the agreement, I’m giving you 60 days’ notice. My last day of work will be X date. Thank you for the opportunity, I’m moving on. Once again, this letter is not the time for an airing of grievances or all the problems. There’s no benefit to the employee from putting all of that down on paper. It needs to be short and sweet. I’m exercising my right to terminate the agreement without cause, I’m providing you with this amount of notice as required. My last date of work is this. Thank you for the opportunity. Good luck. That’s it. There are zero benefits to burning bridges to pointing out all the flaws in the employer. I know many employees feel like, well, I just wanted to say my piece. It’s not a good idea for a couple of reasons. One, at that time, that job may stink because of management, mismanagement, the people you’re working with the opportunity, whatever.

And if you sense some nuclear bomb letter and destroy the relationship, what if something happens down the road? What if the manager changes? What if they move into new territory? What if someone buys them out? If you’ve nuked those relationships, then maybe that opportunity is much better. Now, it’s a bad look and you may have lost out on being able to go back. That’s one reason not to do it. And the second one is that there’s just simply no benefit. If you’re moving on, move on. It feels good for the employee to get all that stuff out. But when it’s written, it’s forever. And so, they’re going to have that letter. If it’s bad, they’re probably going to show it around to other employees or the management. And it just makes the employee look bad. So, keep it short and sweet.

Say, this is the section of the contract, I’m exercising this without cause termination, last day of work is this, Thank you. Move on. That’s it.