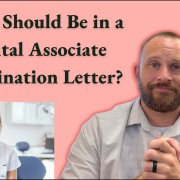 With cause termination would be one of the parties is in breach of contract. And from the dental associate’s perspective, let’s say the employer agreed to pay a bonus and they’re refusing to pay it for whatever reason. The dental associate would send them a letter that states, you are in breach of contract due to this. And then there usually would be what’s called a cure period where somewhere between 15 to 30 days, the party has an opportunity to cure the breach, so to fix whatever the problem is. And in this scenario, if the employer ultimately pays the bonus, then the dental associate couldn’t terminate the contract for cause. Now, without cause termination is most terminations, probably 9 times out of 10 is due to without cause termination.

And that means either party can terminate the agreement at any time with a certain amount of notice to the other party. Most of the time, it’s somewhere between 30 to 90 days. Let’s say dental associates are out of practice, and maybe they have a better opportunity somewhere else then they investigate the termination section of their contract. And then it’s going to say, you must provide 60 days written notice order to terminate the agreement. You would then have to work out those 60 days, and then at the end of the 60 days, you could move on. In this scenario, you would have to write a letter and then provide that to the employer. And then at the end of that notice period, you could move on. Let’s talk about the details of a termination letter. In any kind of contract, there’s going to be a section that’s called notices or notice. Other blogs of interest include:

And then in that section, it’s going to state how a party can give proper notice to the other party, meaning, for you to provide effective notice, you need to either hand deliver it, send it via certified mail, fax, email, whatever. It must be a written letter that states, I’m terminating the contract. So first, you need to look in that notice section, see exactly how you can give effective notice. If you don’t give effective notice, if you just verbally tell the owner, usually sending an email is not considered effective, then theoretically, the owner could make you wait longer until you terminate it properly. In this case, if you must send the letter, you figured out how to send it via certified mail, what needs to go in the letter? The letter of terminating a contract without cause is not a time to air grievances.

I know when I speak to dentists, all the time, they’re unhappy. They want to put down all of the reasons why they’re unhappy, all the reasons why the employer is terrible at business, and they’ve treated them unfairly. They just want to unburden the problems. Don’t do that. I know it probably would feel good to do that. There is zero benefit to the dentist from doing that. You need to simply put, I am terminating the agreement via this section, I am required to give 60 days’ notice, here is my notice, my last day of work will be this date. Thank you for the opportunity, signed, Dr. Dentist. That’s it, short and sweet. I’m terminating the agreement per this section. Thanks for the opportunity, last day of work, nothing else. If you were to write a two-page airing of grievances, you obviously are going to burn bridges with that employer. But word simply could get out that there were major problems, and you could be labeled as malcontent.

Whereas if you just keep it short and sweet, don’t get into all the problems, none of that is going to follow you into a new job. I understand it may feel good. Don’t do it, just keep it short and sweet, send it to the employer and then move on. It’s not uncommon for a new employer to call your last employer. And if you had that scenario happen and you just blasted them in this letter, that employer is obviously not going to give you a great recommendation. Whereas if you just say I’m moving on, thank you, there’s not a lot negative that they could say unless there was major friction while you were there, but it just doesn’t make sense.

So, you obviously can’t terminate the contract without cause. It must be via written letter and don’t kind of mess up your future by burning a bridge with the old employer.

What Happens if you are Fired as a Physician?

Your Nursing License was Revoked, Now What?
Scroll to top