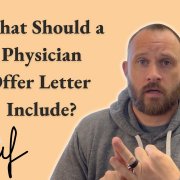 And then it refers to dozens of policies and procedures that they have in mind. But today, let’s just talk about a general offer letter. Usually, a hospital, healthcare network, or something like that, will be the ones that will require the offer letter prior to offering the physician the actual employment contract. I find most smaller physician-owned practices skip the offer letter. They just maybe verbally talk about the terms and then just present the employment agreement to the physician. Let’s say you are coming out of training and the hospital has said, we want to offer you an employment agreement, however, we want to give you an offer letter first, and then we’ll agree to those terms and sign it at that point. Then, we’ll move forward with the employment agreement.

Normal things that should be in an offer letter, usually, the terms of the agreement, how long it lasts, maybe a brief statement about how the contract can be terminated. Usually, the without cause portion of that would be the only thing mentioned, meaning how much notice must be provided by either party to terminate the agreement without cause, usually 60 or 90 days. It’ll also have your compensation like what is the base salary, maybe if there’s productivity bonus based upon RVU production, net collections, they would put at least a basic calculation of what the expectation would be. In this case, if there was an RVU bonus expectation, the offer letter normally would have, okay, what is the annual RVU expectation or maybe what the quarterly expectation is? Other blogs of interest include:

And then what’s the compensation factor, what is the RVUs, what are they multiplied by monetarily to get whatever the bonus is. If it’s net collections, they could even put an actual threshold. If you generate over 200,000 in a quarter, you’d get a certain percentage of that as well, compensation, term, termination, maybe a brief statement on what some of the restrictive covenants are. Restrictive covenants are things that the physician can’t do after the contract ends. Normally, non-compete, non-solicit, non-disparagement. In this case, the non-compete is the most important part. Sometimes, an offer letter will put the basic terms of the non-compete. How long does it last, what’s the geographic restriction, and then maybe what type of specialty? There are some physicians who can do multiple things.

And so, it’ll state what those things exactly can and can’t do. For instance, if you’re in internal medicine, you could have primary care, you could be a hospitalist, or maybe do some ED urgent care. Usually, the contract would state, alright, you can’t do what you’re doing for us for a year in, within 10 miles. But you don’t want a blanket, you can’t practice medicine at all within that time period. Also, what could be in the offer letter: who you report to, the locations that you’ll practice in, malpractice insurance, what the coverage limits will be, and if it’s a claims-made policy, who pays for tail insurance. Just basic stuff that matters. I find most of the time, it’s just based upon compensation, that’s what they care about the most.

And then also, signing bonus, relocation assistance, how much is the employer going to pay a signing bonus, and then how much are they going to help the physician move to whatever the location is. Once those basic agreements are met and the physician is okay with it, then they sign the offer letter, give it to the employer, and the employer will then present the physician with the employment agreement. Now, the number one question I get: is the offer letter binding? Well, for the most part, no. In this scenario, if it’s with a private employer, hospital, health network, the offer letter is not binding. The only situation where it may be binding is if it’s, as I stated before, in academia. It’s the university that’s providing the offer letter/letter of intent, and they kind of consider that, the employment agreement as well.  In that case, it could be binding.

But for the most part, unless it specifically states, this is the contract as well. The offer letter is not binding. So, the physician could potentially back out after signing the offer letter. I mean, many times, the basic tenants of an employment contractor are fine. And then once we see the actual employment agreement, the terms of it, it’s much worse or it’s maybe different, or the language in an offer letter, the basics might sound great. Then when we get into the contract and look at the specifics of the language, it’s not great. That happens frequently. Or if there are terms not listed in the offer letter, and then they show up in the employment agreement and it could substantially change whether the employment is actually a great opportunity. And maybe it’s not so great.

So, those are the basic things that have to go into an offer letter, and also whether it’s binding and then kind of what follows with the employment contract. Is an offer letter important? I don’t think it is. I mean, generally, the terms have reached verbally before they get to an employment agreement. I always find it’s much easier to tell someone if a job is kind of a great opportunity or maybe a potential red flag after we see the agreement. Going over an offer letter with a physician, I mean, it’s fine to kind of break down, alright, is this comp industry standard or not? But ultimately, I always tell the physician when I’m reviewing the contract for them, we must see the contract before I can tell you whether this is an overall good potential opportunity.

Who Owns the Medical Record as an Employed Physician?

Can a Physician Sign Multiple Letters of Intent?
Scroll to top