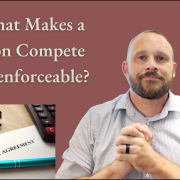 What are some of the things that can make a non-compete unenforceable?  For the most part, if you’re a professional before you start an employment relationship with an employer, they’re going to make you sign an employment agreement or perhaps an independent contractor agreement. And then within those two documents, there very likely will be non-compete. A non-compete is a restrictive covenant, and there will be a section in your contract about restrictive covenants. These are things that you either can’t do during or after the employment relationship ends. And there are three parts to any non-compete. It’s the scope of it, meaning what is it preventing you from doing, for how long, and then within what geographic area.

So, they’re going to say, is it reasonable in scope? Is it reasonable in time? Is it reasonable in a geographic restriction? Now, this fluctuates from state to state. There is no set rule, meaning, oh, if it’s under one year in more than 20 miles or prohibits just what your primary skill is. There’s no set rule, it’s a case-by-case basis. I guess you must figure out, alright, what is considered reasonable or not? And that’s going to be dependent upon a few things. Let’s say you’re in sales and you do software sales in Atlanta, Georgia. Well, the non-compete could say you can’t do software sales within the county where you currently are located for two years. In that case, it’s probably enforceable. In almost any non-compete, you’d want to keep it down to 12 months, no more than 12 months.

But in that scenario, it’s stopping you from doing the specific thing that you’re doing for them for a reasonable amount of time within a reasonable area. Now, if they said you cannot do sales, meaning any sales for any industry for five years within the entire state of Georgia, well, that would be completely unreasonable and likely not enforceable at all. There will be language in most non-competes that say if a court finds this is not enforceable, then they’ll either offer some alternative options. Meaning, let’s say they say it’s a two-year non-compete. Then they’ll step it down and say, if a court finds two years unenforceable, then it’ll be stepped down to 18. If they find 18 months unenforceable, they’ll step it down to 12. Or if it’s five counties, move it down to one county, or if it’s 50 miles, move it down to 20 miles down to 10, down to five.

Most smart employers will put that language in their contracts. What they don’t want to do is have the judge determine specifically what they consider reasonable, and most judges will abide by the terms of a contract if they can. And so, if there is some step down, what exactly the judge will do is they’ll just step down until they find a spot that they think is reasonable. So, some things that would make it unenforceable, as I said before, are if the scope is way too broad, if the time is way too long, or if the geographic limitation is much too far. Those are the three factors. When you’re looking at a non-compete and determining whether it would be enforced or not, those are the three things you need to consider.

I would suggest if you’re concerned about whether something you’re signing is enforceable or not, or if you’re in a state where either it’s enforceable or not, contact an attorney who handles employment contracts and see what they have to say. As I said before, there’s almost no hard fashion rule beyond it being completely unenforceable. It’s more of just a judgment call of, alright, what industry are you in? What’s reasonable within that industry? Are you in a rural community versus New York City? Obviously, 15 miles in New York City is going to be a lot different than if you’re in a rural town in Idaho, where 15 miles there could be no one else for you to compete against, whereas in New York City, that could knock out potentially thousands of opportunities. So, those are all the things that consider whether it is considered unenforceable or enforceable.

Can a Company Make You Sign a Non-Compete After Employment? | Employees Non...