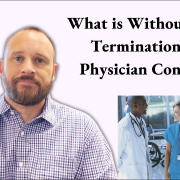 What is without cause termination in a physician contract?  Essentially it allows either party to terminate the agreement at any time, for any reason, with a certain amount of notice to the other party. The reason why this is so important is that if a physician enters a job, I mean, everyone expects a job to be great, right? You don’t take a job expecting you to want to leave immediately, but things change, or it certainly can be different once you start. Let’s say a physician takes a job and after a few months, it’s clear it’s either not a good cultural fit, maybe they’re on productivity compensation and the volume isn’t there, maybe they just don’t like working with the management or the other physicians, whatever the reason, they’ve decided, I do not want to stay here.

And so, without cause termination will allow that physician to give notice, work out a period and then move on. The average length or at least the standard length for most without cause termination notice period is somewhere between 60 to 90 days. Anything higher than 90 days causes a couple of problems. Anytime somebody gives notice, the dynamics will change between the physician and either the other physicians or the organization itself. You’re no longer in the long-term plans. Sometimes, there can be bad blood as well. And so, a shorter period to have to work out whatever it is, is advantageous. It’s just better. If you had a 180-day notice, you’re there for six months dealing with a potentially awkward environment.

Another thing to consider is the longer the lead time, the harder it is to find a new job. If you’re coming out of training, everyone comes out at the same time. So, all the employers understand this and there’s a rhythm to when they offer jobs and start onboarding and all that type of thing. If you’re out, you’ve been out for a while and then you decide to switch, it can be at any time, but most people don’t post for jobs six months in advance. They will say, we have a need now. If you have a six-month notice requirement for your job, you may lose out on job opportunities because they need someone much faster than six months. Other blogs of interest include:

And so, they’re going to find somebody and kind of leave you in the dust, so to speak. Two main reasons: don’t put yourself in a toxic environment for a long period of time, and then two, help yourself to shorten it down so that you can find a new job more easily. In the contract, it’s going to state how much notice you must give. And let’s just say it’s 60 days in this example, it will also state that it must be in writing. So, you need to find in the contract, it’ll be under the termination section, and it will say like without cause termination or for no good reason or something like that. And then it’ll just state, either party can terminate the agreement with a certain amount of notice to the other. As I said before, in 60 days.

There’s another section in your contract that’s called either notice or notices, and it’s going to state exactly how you can provide notice to the employer. It’ll state whether it needs to be certified mail or hand delivery. Most contracts don’t have email, certainly, there’s no verbal acknowledgment, no fax. If you were to tell your boss, hey, I’m leaving in 90 days, but not give them written letter that states you’re leaving, they could potentially force you to work for another 60 days until you give them effective notice. So, those two sections. Look into the without cause termination section to see how long or how much notice you must give and then look in the notices section and make certain that you’re able to provide effective notice. I’ve had a couple of times where physicians have called me after the fact and said, I emailed my boss.

It was 60 days’ notice; they waited 45 days and then came back at me and told me I didn’t provide them effective notice. And now, they’re saying I must give another 60 days. Well, obviously, it’s vindictive on the part of the employer. They were mad and they did that on purpose just to kind of screw with the physician. But if you don’t give effective notice, it doesn’t count. Make certain you’re following both of those things: giving the proper notice and then following the notice section. Now, what happens if you decide to leave a job and don’t give the proper amount of notice? Well, many contracts will have penalties associated with that. For instance, a common way of doing it would be to penalize the physician, whatever their kind of average daily rate is for every day that they didn’t give enough notice. If it was 60 days and they only gave 30 days, then they’d owe 30 days of their average pay to the employer, which could be a significant amount of money, obviously.

You want to make certain that you’re giving as much notice as is required in that without cause section, therefore, you can’t be penalized. I guess theoretically they could come after you for recruitment costs, locums to cover your shifts or if you’re an outpatient or something like that. It’d be rare for them to do that, but you are opening yourself up to liability if you fail to give them the specified amount of notice in your contract.