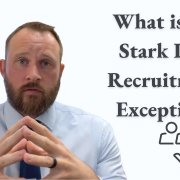 However, there are also some opportunities for a hospital in the area to essentially supplement the income of that physician for the first year and providing some other incentives as well. So, you could have a recruitment agreement that will have an income guarantee. They will essentially pay the medical practice a certain amount to supplement the physician’s salary, they can provide moving expenses, signing bonus, student loan repayment, they could also cover expenses from the practice associated with bringing the physician in, most likely through overhead. There are a lot of opportunities for a hospital to supplement a medical practice. Why do they do this? Well, it’s possible that a medical practice simply couldn’t financially afford to bring in a physician without these supplements or it’s also just a smart way for a practice to not have to pay as much money as they normally would.

In most of the specialties, it would be someone who must build up a practice and most physicians who are moving into a new job are not very profitable for the first year or two. Once again, kind of specialty-dependent and practice-dependent, are they replacing somebody? Are they coming in from the cold? Do they have any ties to the community? All those things kind of factor in, I mean, it normally takes 12 to 18 months for practice to reach maturity. If you’re in family care and you were to join a practice, you would continue to see more volume for the first 12 to 18 months. What are the rules that dictate what a hospital can do? What are the conditions that need to be there?

There are also some exceptions for rural communities, and then also those residents that have been in training that want to stay in the area. There are a few minor exceptions, but for the most part, the things I just went through are what dictates whether a hospital can provide the recruitment agreement. What does the recruitment agreement look like? It’s a contract like an employment contract and dictates the terms of what they provide and then most importantly, what the forgiveness period is. The hospital does this so they can bring in a specialty and then down the road, or I guess initially, they will get downstream revenue from referrals from this physician. I mean, that’s the whole point of bringing them in. Even though, let’s just say they provide an income guarantee, a signing bonus, and overhead expenses for the first year, which is standard.

Well, then they will require forgiveness period, which means the physician must stay in the area for several years, usually three, sometimes four, and then each month that they’re in that area providing care, a fraction will be deducted from the overall loan amount. Let’s say a hospital sends 200,000 to the medical practice. That 200,000 amount, after the first income guarantee period, which will be usually one year, will then be, let’s just say, three-month forgiveness. So, 1/36 of that 200,000 will be forgiven every month. And which means, no one must pay it back if the physician will stay for the forgiveness period, in this case, if it was three years, then no one will owe any money back to the hospital.

The hospital, like I said, will hopefully gain more by having that physician in the community and utilizing the downstream revenue from recruiting referrals into the network, which should more than cover whatever they paid out to bring the physician into the community. The downside to the physician: one, depending upon how the agreement is written, if they do leave the area, then they’re responsible for that amount of money. Usually, it would be a joint responsibility between the practice and the physician. But for the most part, if the physician leaves early, they’re going to have to pay back that money. And for some physicians and some specialties, it can be a significant amount of money. I mean, I’ve seen up to 500,000 after the first year, not that it’s specialty-dependent obviously, but it could be a lot of money.

And let’s just say the relationship goes sour with whoever the employer is and maybe there aren’t opportunities in the area for the physician to switch to a new group and continue in the geographic region. It can be a big problem. The benefits of a recruitment agreement: one, if the job couldn’t exist, the medical practice couldn’t afford to bring in a new physician into the area, then clearly, the recruitment agreement is creating the job opportunity for the physician. So, it may be necessary, I mean, it’s a no-brainer for medical practice. They essentially can have an entire year of physicians’ salary supplemented by a hospital. I mean, they absolutely would normally take advantage of that if they could, and some practices are savvier than others in utilizing that. Some of those agreements will require that, and they should, there’ll be no non-compete. If the physician must stay within a certain area to not violate the agreement, and then the contract is terminated with the original employer, but there’s a non-compete that forces them out of that area, well, that is a huge problem for the physician.

Most recruitment agreements will prohibit the employer from placing a non-compete into the agreement. That’s one thing to look for. That was kind of a little breakdown of recruitment agreements, stark law, and anti-kickback statute. It could be a valuable tool for a physician, but it could also be a disaster if it’s not worded properly or if the employer has thought of all the permutations if the physician leaves the practice.

The physician must relocate their medical practice to the area. What is the area itself? It must be the geographic region that the hospital serves. And in this case, it should be the lowest number of contiguous zip codes from which the hospital draws at least 75% of its patients. What that means is in the recruitment agreement, there will be an attachment, and, on that attachment, it will just have a bunch of zip codes. And depending upon where it’s at, it could be 40 different zip codes and in some bigger cities, it could just be a couple. What those zip codes mean is the physician has to relocate their practice within those zip codes and then they have to provide care to people within those zip codes.

And that grants the exception of how a hospital can supplement the medical practice that the physician is joining. How do they supplement? Well, it’s normally through an income guarantee. The hospital will guarantee that the physician will receive a certain amount each month. They can provide reimbursement for overhead expenses, signing bonuses, relocation expenses, student loan assistance. There are several ways that they can supplement a medical practice, but the service area itself, the medical practice itself must be within those zip codes. And then I guess the main thing to consider is if the physician decides to leave the medical practice, then they can continue to stay within that stark service area and not have to pay anything back to the hospital. How the recruitment agreement works is they will provide a certain amount of money and it’s generally the first year, the income guarantee period.

They’ll be forced out and then they may be on the hook for having to pay back the amount that’s still left on the loan. First, the physician needs to make certain that there’s no non-compete, or maybe like a very reasonable and small non-compete where they’d have other opportunities. Another analysis that needs to be done is one, are there other opportunities in that area if the physician were to leave? Sometimes in smaller communities and certain specialties, there’s only one practice that does that. So, if a physician wants to stay in that service area, is there another practice to go to? Do they have alternatives? I mean, the worst possible thing that can happen to a physician is when something happens with the original employer, they simply don’t have an opportunity to get a job within the service area, and then they owe hundreds of thousands of dollars to the hospital.

There should be joint and several liabilities between the medical practice and the physician, but that’s another thing that should be looked at as well. Hopefully, that’s a good analysis of what this stark service area is for recruitment agreement. These are tricky. If the recruitment agreement is the sole reason why a job is available, then certainly it’s a good opportunity for a physician. But these do not always end well, and they present some real challenges if the relationship goes south with the employer, so need to be careful.

Can a Physician Work Locums with a Full Time Job?
Scroll to top