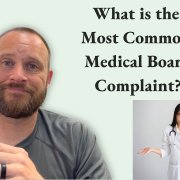 What is the most common medical board complaint? Instead of there being one, I think there’s probably a group of most common complaints and we’ll go through those. Obviously, the first one is clinical issues. If there’s deviation from the standard of care, that complaint could be sent to the board, from the employer, from a colleague, from the patient, from a patient’s family member, all those people could then file a complaint with the medical board alleging a clinical concern. Most boards have criminal reporting requirement. Some boards require the physician to report a charge. Others require the physician to report a conviction, but a complaint can start from any kind of criminal conduct by the physician.

Another way would be behavioral concerns. If there was some fight amongst the med staff or something like that at the hospital and maybe the physician was either removed from the med staff or other privileges revoked or if it’s just some kind of budding heads which continues to happen consistently, it’s not uncommon for an organization to report the physician for behavioral concerns. In that case, normally, most boards will then require the physician to get psychological evaluation to rule out any, I guess, larger issues. And then the recommendations from that psychologist or psychiatrist and in most medical boards would then be incorporated in and discussed at whatever the board meeting is. Substance abuse issues are another huge reason for a medical board complaint to be open.

If a physician is impaired at work, the employer will normally file a complaint about that. It could be, once again, a patient, a family member, a colleague, it could be drug abuse, alcohol abuse is the most common, prescription drug, or if the physician has strange prescriptive practices. Most states have a database which lists all the scheduled drugs that the physician prescribes. And obviously, prescribing to yourself, which does happen or a close family member, which does happen is a huge red flag. Other blogs of interest include:

If they were to run a database query and they saw that the physician was prescribing a family member, or even to himself, that would raise red flags and a complaint would be issued there as well. In my mind, I break it into two main groups.

You’ve got the clinical side and the behavioral side. As I said before, the clinical stuff is just, did something go wrong? Clinically, was there a deviation of standard care? Maybe a peer review initiated, something like that. And then the second one in the behavioral category. It’s all the other things I listed like substance abuse, clashes at work, I guess boundary violations are another big one. If there’s sexual relationship between a doctor and a patient, that can obviously cause concern for any board. Most boards will list specifically when/if a physician can start a relationship with the patient. But as you know, if a physician starts a romantic relationship with the patient, most of the time, it doesn’t end well. And now, with technology and text messages, social media, and direct messages, there’s almost always a record between the physician and the patient regarding their relationship.

And it’s difficult to defend when it’s in black and white writing. So, those are the most common reasons that a physician could have a complaint filed with the medical board. Kind of ranges, but I know when I speak to most people, they always just kind of associate it with just clinical issues, but it goes well beyond that.

What is a Draw in a Dental Contract?