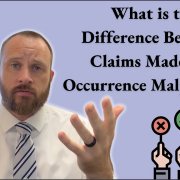 What is the difference between claims-made and occurrence-based medical malpractice insurance? This is absolutely a topic that I generally talk to almost anyone about when I’m reviewing their contract. Those coming from training who’ve never really had to worry about this before. I find, they really don’t understand the differences between the two. And even those that have been out a while don’t know the difference. Let’s kind of break down each one and then compare the two. And maybe if you had the choice, which one would you want to go with?

Now, the cost. A good rule of thumb is that tail insurance costs about twice your annual premium. The annual premium is how much the employer pays for your insurance each year. Let’s say you are primary care. Most states’ primary care will cost around $6,000 a year. So, if the physician was responsible for the tail, multiply that by two. Their tail insurance cost would be about $12,000. It’s a one-time payment, usually paid before the physician leaves or simultaneous to the termination date.

They paid $12,000, which covers the gap. Some tail insurance policies are generally a specific amount of time. Some of them will state, they will cover until the statute limitation in that state ends. That’s generally what the cost, tail insurance, and then what claims-made insurance is. Now, let’s talk about the other type of insurance.

Difference Between the Two in Practice

However, most private small physician-owned groups do not pay occurrence-based coverage. They pay claims-made coverage just because it’s cheaper. And they want to give the responsibility for tail coverage to the physician. It just saves them money. An occurrence-based policy would make more sense for a physician, but the cost is also an issue. Usually, if there is a choice and you need to calculate, how long will I be staying with this employer? And then whether I pay a third more, if you’re the one that must pay, which usually you don’t. Me paying a third more each year would offset having to pay twice the annual premium down the road when you must pay for the tail coverage.

If the physician has the choice, certainly go with the occurrence-based coverage. If they’re not paying for it, but the employer will, then go for occurrence. Or if not, then the negotiation part of this goes into alright. Well, if I have a claims-made policy, who will pay for the tail after the agreement ends? Depending upon specialty, this can be a critical part of the negotiation.

Sharing the Cost For Tail

For instance, if someone is an OB-GYN, their tail coverage and annual premium costs are high. I’ve seen some tail costs for an OB-GYN are 50,000, 80,000. It’s not an insignificant amount of money, and bargaining over who’s responsible can be a huge part of the negotiation. Some employers will get creative. They might say, alright, if you stay for one year, we’ll pay for a quarter of the tail policy. For two years, we’ll pay for half. And then, if you get to four years, we’ll pay for it.

Tiering it up incentivizes the physician to stay because they don’t have to pay for it at the end. And it’s just fair that both parties would share the cost. Some places will do 50-50. So, if you leave, we’ll pay half your tail, you pay half your tail, and then you can move on. So, those are the differences between occurrence and claims-made medical malpractice insurance for physicians. Hopefully, that’s helpful.

What is Tail Coverage?

Malpractice coverage is a type of professional liability coverage. It helps protect physicians and other healthcare professionals from the financial risks associated with lawsuits. Lawsuits in which patients believe they were harmed as a result of an incident involving medical care. The coverage depends on how much the policy is worth (premium) and your specialty.  Personal injury attorneys are more likely to take cases against physicians working in hospitals than those who practice family medicine or internal medicine in private practice.

What Are Types of Medical Malpractice Insurance?

Let’s just kind of talk about three of them—first, self-insurance. Large hospital networks usually have their policy: they’ll set aside a pot of money and pay claim out of that. In that circumstance, generally, the physician doesn’t have to worry about purchasing a tail. The employer’s self-insurance program covers that. This is great. I mean, it’s excellent insurance when a physician never has to worry about the tail coverage. And doesn’t have to worry about paying for the underlying premium. That is a lovely, secure feeling, and that’s what most large hospital networks utilize.

Occurrence-based coverage is one of the types of malpractice insurance. And that means a policy has to be in effect when the event occurs. Any malpractice event will occur while you’re employed with the employer. So, you are covered in perpetuity if an occurrence-based policy is in place and then something happens. The benefit of occurrence-based insurance is that you don’t need to purchase a tail coveragel. The downside is it costs more than a claims-made policy.

A good rule of thumb is that occurrence is about a third more expensive than claims-made policies annual your premium. So to give an example, let’s say you have a claims-made policy, and it’s 6,000, then your occurrence-based coverage would be around 8,000 per year. There is a math equation that needs to be considered to determine what is the best policy for a physician. And I’ll get into that in the end. But honestly, physicians often don’t have a choice between an occurrence-based or a claims-made policy. It’s whatever the employer chooses to provide.

That is what the physician must pursue. The last one is claims-made. That means a policy must be in effect when the claim is made. When someone terminates a contract and no longer works for the employer, there is a gap between their last day of practice with that employer and the last day somebody can sue. That’s called the statute of limitations for malpractice claim. In most states, it’s two years. If there is no policy in effect if a claim is made, then the physician is in trouble. Nearly every employer will require one of the parties to purchase tail coverage.

Tail insurance covers that gap between the last day a physician works for the employer and the last day somebody can sue them. Now, it’s two years from when the patient either knows or should have known of a malpractice incident. It could go past two years if there were no way for the patient to understand until a few years later. I’d say most of the time if a physician works for private practice, a small physician-owned group, or something like that. They will have to be the one that purchases the tail coverage policy. Some employers will pay for it, but I’d say the physician is responsible for their tail coverage more often than not.

What is a Physician Non-Solicitation Agreement? | Medical Contracts

Who Owns a Patient’s Medical Record in a Private Practice?
Scroll to top