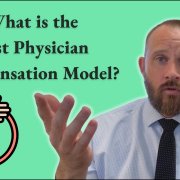 The physician produces work RVUs for every encounter and generates a certain amount of RVUs based upon the schedule released by CMS. Then there is compensation factor. An actual monetary value multiplied by the RVUs generated times that compensation factor. That’s how much the physician will make. Now, there are certainly hybrid models that combine one or all of these. It would be very rare to have a compensation model that had both net collections and RVUs. That almost never happens. Maybe there would be like half-based salary minimum, and then the rest of your compensation would be tied to either net collections or RVUs. I find that most physician-owned practices if they are going to have some productivity compensation use net collections and then most hospital-based health network employment would utilize RVUs. Why do they separate them? Not sure. But that’s just how it works in this industry. Which one is best? Well, I think just having a straight base salary with absolutely no incentive for the physician or no productivity incentive doesn’t make a lot of sense to me. Now, if you’re a new physician coming into a new job, I’ll just say with the hospital you’re establishing a practice in the area, there will almost always be an income guarantee for the first couple of years.

It usually takes 12 to 18 months for a practice to reach maturity. So, it only makes sense that a physician wouldn’t be placed on productivity compensation immediately, especially primary care, cardiology, any specialty where you must build up a patient base like ED, hospitalists, those types of things where you’re just doing the work that’s there in front of you. You’re not building up a practice, you can kind of hit the ground running and, in those scenarios, it’s okay if it was in RVU based productivity model, but if you’re building up a practice, it absolutely makes no sense at the beginning. Many organizations will have an income guarantee for the first year or two, and then it will transition into maybe some kind of hybrid of base salary plus RVUs generated. Other blogs of interest include:

Let’s first take net collections. In the net collections-based agreement, the main point of negotiation is the percentage. I know when I speak to physicians, they’re kind of taken aback when they see they’re only going to make 35% of anything that is collected by the practice. However, overhead is expensive. 60% is not an uncommon amount in physician practices. If the employer is going to have profit, they need a percentage within that area. As I said before, usually somewhere between 35% to 45% is normal. You simply will not see a net collections-based agreement over 50%. And if they’re a good businessperson, to be honest, anything over 40 to 45 wouldn’t make financial sense unless they’re efficient. One thing to negotiate would be the percentage of collection that’s given.

It can either be calculated monthly, quarterly, and yearly in some instances, and then it’s kind of tier up, or there’s reconciliation at the end of those periods. So, if it’s a net collections-based agreement, the percentage is what’s going to be the negotiating point. It can be just pure net collections, meaning, everything that’s brought in, that’s what you make, or maybe you have a base salary. And then let’s just say they say any quarterly collected over $200,000, you get a percentage of whatever that is in addition to your base salary. As far as RVUs are concerned, once again, you could be paid monthly, quarterly, or yearly if it’s reconciled. Now, obviously, you’re not getting paid once a year, but it could be reconciled at that period. Usually, in an RVU based contract, they would come up with draw.

Let’s just say you’re taking home 10,000 a month, no matter what. And then at the end of the month or of the quarter, there’ll be a target. And then any RVUs generated above that target would be multiplied by that compensation factor. And then that’s what you would take home. So, what is the best? Well, as I said at the beginning, it depends upon the setting for the physician. Net collections based do not work in a hospital environment. So, if you are in a healthcare network hospital, it just simply doesn’t work. RVU is the only thing that works in that environment. I do think RVUs are fair, but you also must consider this, if you’re in a specialty like ED or hospitalists, and you’re only getting only on RVUs, you could be completely screwed if the volume of the hospital is very low. If the sense is slow, if the ED is slow, there’s nothing you can do. In that scenario, you would not want to be paid purely on production. And honestly, it doesn’t happen very often, but I’ve seen it before. And it’s just a bad idea. Now, if you’re in primary care, you’re at the mercy of is the office manager good?

Is the office set up well, are they efficient? Is the billing and collection department on top of it? If you’re on a net collection base agreement and the billing and collections department is terrible, well, you’re the one that’s going to suffer from that. So, I would always try to work in hybrid where you’re going to get a guaranteed base. But if you perform over a certain amount, you’ll also reap the benefits of the production as well. I mean, it’s just human nature. If you can get a bonus, then most people are incentivized to work harder to get that bonus. That’s why most of these employers provide something like that. When you’re just on a base salary, with no opportunity for production, you’re just doing the work that’s in front of you, it’s just human nature that you’re likely not going to focus or work as hard if you didn’t have that kind of opportunity to make more. So, which one is better?  It depends upon the setting but all three can work perfectly for a physician if it fits the practice that they’re in.

What is Special Education Law in Arizona?

What is a 504 Plan in Arizona?
Scroll to top