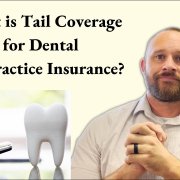 One is occurrence-based coverage, and the other is claims made. In an occurrence-based policy, tail insurance is not necessary. It just means a policy must be in effect when the malpractice event occurs. The other coverage is called claims made and, in that scenario, tail insurance is necessary because it states that a policy must be in effect when the claim is made. It’s possible if you leave an employer, someone could sue you one or two years later, and if you didn’t have a tail policy, you would not be covered even though it happened two and a half years ago. Let’s kind of dive into the cost of these types of things. If you have claims made policy, which will be the vast majority of dental associates will have, after the contract ends, for whatever reason, it’s terminated, or it just ends, and it’s not renewed, or maybe someone is in breach of contract, but for whatever reason, once the contract terminates, you’ll have to get a policy that covers the gap in between your last patient that you see and then the last date that you can be sued.

For most states, it’s two years. There are some exceptions for people who are no longer minors. And it’s usually from the date you either knew or should have known of the malpractice event. It’s certainly possible that someone may not even know that malpractice occurred for a year or two. And in that scenario, that’s how the dentist can be sued after the fact. So, you’d have to purchase a tail policy, it’s also called gap insurance or extended reporting, but it’s mostly known as tail insurance in the industry. You’d have to purchase that prior to the end of your current contract, and then it would be for a set amount of time. Other blogs of interest include:

If it was $6,000, you’d have to pay that amount all upfront before the contract terminates so that there’s a policy in place. It’s a one-time payment. You don’t have to pay it annually. You just pay the six grand; you’re covered for as long as the tail policy lasts. Now, who pays for that? Well, it just depends on what it says in the employment contract. Many employers will make the dentist pay for their own tail. It’s just a matter to negotiate between you and the employer. One strategy if the employer is not willing to pay for all of it is, you could ask them to kind of make a, I guess, like a forgiveness per year. For instance, if you had a three-year initial term, maybe you would say, for every year that you’re there, the employer would chip in 33% of the tail costs.

If you leave between year two and three, they will pay for two-thirds of the tail and then you’d pay for thirds long. If you’re there for three years, they’d pay for all of it. It’s not prohibitively expensive for a dentist. Certainly, when you get into more specialized surgical specialties and that type of thing, it’s going to be a little bit more than if you’re just doing general dentistry. But it’s still something you need to think about and something most dentists have no idea about.

How Long are Most Veterinarian Contracts?What to Know Before Signing Your First Physician Contract
Scroll to top