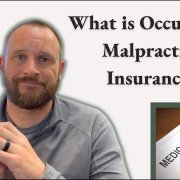 What is occurrence malpractice insurance? There are three main types of insurance for physicians. You have the big hospital networks sometimes can be self-insured, meaning, they set aside a big pot of money, pay claims out of that, or have some other kind of self-insurance program. And in that scenario, the physician would never have to pay tail insurance. Tail insurance is necessary when there is a claims-made policy. If a physician has a claims-made policy, and the contract ends with the employer, then there’s a gap in between the last patient they saw and the last day someone can sue them. That’s the statute of limitations, generally, it’s two years in most states.

And so, they would need a policy that covers that gap. So, that claims-made insurance needs tail. What we’re going to talk about today is occurrence insurance. An occurrence-based policy means that a policy must be in effect when the claim or the incident occurs. At any point, while employed, if there is medical malpractice incident, an occurrence-based policy will cover that. There is no tail insurance necessary for an occurrence policy because of that. Claims made must be in effect when the claim is made. And since it can be made two years down the road, need the gap policy occurrence just when the incident occurs, therefore, tail insurance is unnecessary. As far as cost goes, and this is kind of the deciding factor between maybe which one is better for physicians or another, occurrence-based insurance generally costs about a third more than a claims-made policy would.

Let’s say a physician is in primary care and their underlying annual premium is $6,000. If they had an occurrence policy, it’d be $8,000. So, math must be calculated as far as does it make sense for the physician to pay one-third more per year, or would it be better to pay one-third less per year and then in the end, just pay the tail cost? A good rule of thumb for tail insurance is it’s generally about twice what the annual premium is. It’s based upon the length of time that the physician is with the employer. It can be as low as 150% all the way up to 300% if they’ve been there a long time. Let’s do a scenario and figure out which one might be better. Other blogs of interest include:

Let’s say a physician is with a private physician-owned practice for 10 years. And so, let’s say their annual premium is $6,000. So, $6,000 every year for 10 years, and then when they leave, they must pay tail insurance which is about two times what their annual premium is. So, $12,000. In that scenario, if you just think that, okay, I’m saving 2,000 a year for 10 years, but I only must pay 12,000 for tail. Well, if you’re going to be with a long-time employer, it makes sense in that scenario to go with the claims-made policy. If you went with an occurrence for 10 years, you’re paying 2,000 more per year, so over the 10-year period, you’re paying 20,000. In that scenario, you would end up paying 8,000 more for an occurrence policy and would pay obviously 8,000 less for a claims-made policy.

Let’s do another scenario with, let’s say an OB-GYN and their annual premium is $20,000. And they’re only staying with the company for, let’s say, three years. In that scenario, if they’re paying 20,000 for a claims-made policy, since it’s a third more, we’ll just round it up to 7,000. So, they’ll be paying 27,000 per year for occurrence. So, if they’re there for three years, 27,000, 27,000, 27,000, whereas with the claims made, it would just be 20, 20, 20. And then, at the end of that, let’s just say it was twice the annual premium. They’d be paying a $40,000 tail payment, whereas under the occurrence policy, they’re only paying 27. So, 7 times 3 is 21,000. The tail cost is around 40. Then clearly, in that scenario, it would make sense to have an occurrence-based policy. Now, a couple of considerations are, the employee doesn’t really dictate what type of policy that the employer uses. And I can just tell you from doing this for so long, most employers, or at least privately on physician practices will utilize claims made policy, simply because if they’re going to make the physician pay for the tail insurance, then they’re certainly going to want to save some money.

And they’re just going to use claims made each year, save a third, then make the physician pay the tail. In the long run, they save quite a bit of money. You just don’t see occurrence policies very often. I mean, if I had to estimate, I’d say maybe 1 in 20 of a private physician-owned practice uses an occurrence-based policy. Now, if the physician does have the option and the employer says, you can decide what policy you want, then you must do the math equation we went over. So, that is what occurrence-based insurance is. A little bit more expensive, but don’t have to pay for tail insurance. Is one policy better than the other? Just depends upon the situation of the physician. One specialty they’re in how long they’re going be with the employer.

How Employment Contracts can be Terminated

Will I be Paid my Bonus if I Terminate the Contract Early?
Scroll to top