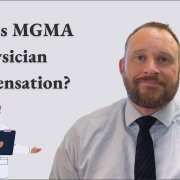 When I am reviewing a contract for a physician, many times they’ll bring up, okay, well, what are industry standard numbers? And then how do we find them out? One tool that I think is very helpful is the MGMA physician compensation data and I’ll kind of go through what it includes and how I use it. First, the MGMA is the medical group management association. It’s an association for professionals that manage or assist with physician practices, and then each year, they will do a survey of physicians by specialty, which gathers a lot of information about how they’re compensated. What goes into the numbers?

Physician Compensation with a Salary

First, they’ll do total compensation of what’s an average salary for a physician in a specialty, RVUs, what are the total RVUs generated in that specialty, what’s the average compensation factor, I’ll get into the specifics of that in a second, and then lastly, what are the average net collections for a physician in that specialty as well. And I kind of break down each one and then how I use it. If a physician is given a contract that just has a base salary, no productivity at all, then it’s helpful to investigate the MGMA numbers and see what’s the normal amount for a physician in that specialty, in that area. The MGMA numbers are broken down by region. You have Eastern, Midwest, Southern, and Western. It’s also broken down into a physician-owned practice versus a hospital/healthcare network as well, because those numbers can fluctuate dramatically.

Once we get into those numbers and see what the average is, it’s a helpful tool. Should it be the only thing relied upon? Absolutely not. I think it’s a terrible idea for a physician to base whether a job is worth pursuing or not just based upon compensation. You have several other factors. What are the benefits? What’s the non-compete like? Is it easy to get out of the contract if things go south? What’s the non-solicit? Do they pay tail insurance? It’s not just compensation, it’s kind of the totality of things, but certainly the compensation is kind of the wow factor numbers and it’s probably the first thing that a physician thinks about in determining whether a job is good or not. Other blogs of interest include:

Getting back to, if they just have a base offer, we can look at those numbers and see if it’s industry standard. I would also suggest for any physician to talk to colleagues, see what offers they’re getting, especially for people in residency. Comparing offers is I think the best way of utilizing whether an offer that you’re getting is fair or not. Next, let’s talk about collections. If a physician is given a contract that’s just based upon net collections, what that means is every dollar that the practice receives, the physician gets a percentage of, usually somewhere between 35% to 45%. In this case, let’s just say someone has a 40% net collection Each month, whatever they collect, they get 40% of that.

And it’s simple. How the MGMA data is helpful is knowing what the average collections are annually for a specific specialty. In that way, the physician can at least kind of forecast what they’re going to make. Now, obviously, its volume-dependent upon the practice, how efficient they are in billing and collecting. But having these numbers certainly is a good base point. Another way of being compensated is via RVUs. Just talking about the collections quick. I find that physician practices utilize net collections-based models, and then hospitals use RVUs. It would be very rare that you’d see a private physician in practice to use RVUs. And then, alternatively, it also would be very rare to have a hospital use net collections, that just doesn’t happen very often. In this case, if they have an RVU contract, I mean there are different hybrid models.

They’ll say, alright, if you generate anything between 5,000 to 6,000 RVUs, you’ll get $50, and then anything from 6,000 to 7,000, you get $10 above that or $5 above. That’s a normal way of doing it. That’s why this data is so helpful. Now, the downsize, in some specialties, the sample size is so low that it can’t really be relied upon or isn’t statistically significant. When you get into the real subspecialties that took three or fellowships to get into and there just aren’t that many of them out in the country, it’s just difficult to have a lot of people respond to the survey and therefore some of the numbers provided, I don’t think can be completely relied upon. It’s a great tool. Is it the only tool? No, other places have Merritt Hawkins, it’s another one that provides data. Another question I get regularly is, how can I see this data?

Well, it’s tough. There may be some MGMA data online that’s old that you can find just by Googling around, but it would be virtually impossible to find the most current MGMA data online for free. I mean, we must pay for it every year. Just Google around for media compensation and try to find some numbers, but I think these are probably the most accurate numbers that we can get. But like I said, they’re not the only number. So, hopefully, that was a real brief rundown of what is the MGMA physician compensation data, and how it can assist in negotiating the contract.

MGMA and RVUs in Medicine

Let’s say write-offs, reductions by insurance companies just straight defaults by the patient in paying, all of those will go towards the physician doing the work, but not getting paid for it.  RVU kind of takes that away. It’s only based upon what the physician does. In this case, as I was saying before, each encounter is given a number and then that number is then multiplied by what we’d call a conversion factor. Then that’s how much the physician will get paid. Let’s just do primary care for instance. Let’s say the median RVUs generated in a year for primary care is roughly between 5,000 to 6,000. If they were being compensated annually based on RVUs, you’d take 6,000 RVUs and you multiply those times the conversion factor, and then that’s what they would make for the year.

What is a Physician Recruitment Agreement?

Can You Break a Veterinarian Contract?
Scroll to top