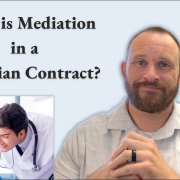 What is mediation in a physician employment contract?  In nearly every physician contract, there’s going to be a couple of things about what happens if there is a dispute. Everyone goes into a contract hoping that it’s the greatest relationship of all time. Unfortunately, this doesn’t always happen. And so, if there is dispute or you think that one party thinks the other is in breach of contract, or just can’t meet in the middle, usually, the contract will state a couple of things. One, it will state what law is used. It should be the law of the state that you’re in. I’ve seen a couple of larger corporate-owned physician groups where maybe they have physicians in dozens of states, and they’re based in Florida or something.

The contract will state, although the contract is taking place in Texas, Florida law will hold. I mean, no one should agree with that. The laws of the state where you’re working should be the venue for any kind of dispute. It may even specifically state, like for instance, here in Arizona, Maricopa County is basically the Phoenix area and surrounding cities. And so, it may state in the contract that any lawsuit that’s brought must be filed in the superior court with Maricopa County. That’s not unreasonable as well. It can state exactly if there is issue, that’s where it will be filed. Other contracts will state, there must be dispute resolution process. So, instead of someone just going straight to court and filing a lawsuit, they’ll state, there must be an accelerated dispute resolution.

And in the legal field, dispute resolution generally is two things: either mediation or arbitration. Mediation is non-binding arbitration. What that means is usually, a lawyer, maybe a retired judge will attempt to reach compromise between both parties. However, if both parties are not happy with the outcome or not willing to compromise, nothing binding results from it. Usually in a mediation, what will happen is both parties will split the cost of the mediator. And as I said before, it’s a lawyer or retired judge. And then, usually, they’ll keep them in separate rooms. And the mediator will then go to one side and say, what’s your position on this? Then they’ll go to the next room and say, alright, what’s your position? And then will kind of go back and forth saying, well, maybe you’re being unreasonable here. Other blogs of interest include:

Maybe you might want to think about this. And they’re just trying to get both parties to meet in the middle, squash any beef that they have. But if it is an unsuccessful mediation, then it can go one of two ways. It could either go to arbitration, which is binding mediation essentially. In arbitration, same process, an attorney, or retired judge will hear both sides of a case and in arbitration, they’ll render a binding decision. Both parties are bound by whatever the decision was. And it’s outside of the court system. I find almost every hospital network employee in an arbitration agreement within the employment agreement. It will state if there are any disputes arising from this agreement, sometimes, kind of accepting the restrictive covenants. So sometimes the non-compete, or non-solicit will have to go through the court system.

It will be part of the arbitration agreement. But anyway, it’ll say, if there is dispute, both parties must go to arbitration, and then it will state what kind of arbitration. It could be JAMS, it could be AHLA or the American Health Lawyers Association, it could be the arbitration system of whatever county they’re in. And so, how arbitration normally works is that both parties will come to agreement on a neutral arbitrator. They’ll provide a statement to the arbitrator in advance, maybe submit documents if they’re necessary, then the arbitrator will come in, and then the same process happens. They’ll meet with both sides, and they will then render a decision. Generally, it’s a brief written decision of, this is what’s going to happen. Now, if there isn’t mediation or arbitration, then it just simply goes to litigation.

Meaning, if the parties can’t reach an agreement, either party is free to sue them in whatever venue is specified in the contract. There is no downside to mediation. It is not binding. It’s generally because it’s considered a settlement. Whatever is stated within those settlement talks is considered confidential and can’t be used against either party. If it does accelerate into arbitration or litigation, I find it’s a meaningful process to flush out what the actual issues are. Like what really is the bottom-line problem, and then having somebody who’s skilled in mediating and trying to get both parties to compromise is a valuable process. Now, dealing with doctors every day, I understand there are some hard feelings at times. And some people say, not. I don’t want to mediate; I just want to go straight to bringing out the big guns and going right into litigation. And that’s very prerogative. That’s fine. But I do think the mediation process can be fair and helpful in many ways. So, that’s kind of what mediation is in a physician in an employment agreement.

When Should a Resident Receive a Signing Bonus?

Can a Physician Negotiate After Signing a Letter of Intent?
Scroll to top