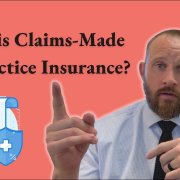 Most of the time, the coverage limit will be 1 million, 3 million. That means 1 million per claim. And then no more than 3 million aggregate per year. If you’re having $3 million claims in one year, you have bigger problems than just insurance. You’re going to have some board complaints. You might have a database entry if they settle, or you lose a trial. So, if someone asks or is concerned about the aggregate limit, it’s a bigger problem than that.  There are usually three types of insurance. You have self-insurance programs. Some of the bigger hospitals and healthcare networks are self-insured, which generally means they have a big pot of money set aside that they pay claims out of. The second would be occurrence-based insurance. And that just means a policy has to be in effect at the time that the malpractice event occurred. The benefit of occurrence-based insurance is you do not need tail insurance. The downside is it just costs a little bit more. Generally, occurrence-based insurance costs about a third more per year than a claims-made policy would.

And then lastly, what we’re going to kind of detail today is claims-made insurance. A claims-made insurance policy must be in effect when the claim is made. If you are with an employer and then the agreement is terminated and you leave, then there will be a period called the statute of limitations from when a patient can still sue you. In most states, it’s two years. Even though you’re no longer with the employer and it was a claims-made policy, and it ended when you left, you need gap coverage. Another policy covers the gap between the last day that you work for the employer, and then generally the last date where the statute limitations run. And that’s commonly known as tail insurance. Other blogs of interest include:

If you must purchase tail insurance if you had a claims-made policy, let’s talk about that. Everyone wants to know, well, what’s the cost? A good rule of thumb is tail insurance generally costs about twice what your annual premium is. So, if you have a $10,000 annual premium, multiply those times two, and then you would have to pay $20,000 once your employment contract terminated to cover your tail, that’s a one-time payment. You don’t have to pay it every year. It’s just, you pay all of it up front and then you’re covered for whatever it is. Some tail policies last longer than others. Generally, you obviously want more than long enough to go past the statute of limitations. For most malpractice claims, it’s when the patient either knows or should have known of the malpractice event.

There are infrequent times, but a patient would’ve no way to know about a malpractice event until years later. And so that’s kind of when this kicks in. Who must pay for tail insurance? If you work for a hospital or healthcare network, most of them will be self-insured, but let’s just say they had a claims-made policy. They will generally pay for your tail. Most of the physicians who have to pay for tail insurance are employed with a private physician-owned group. I’d say it’s probably 75% of physicians who work for a physician smaller physician-owned group must pay their own tail. Is this something you can negotiate? Sure. A couple of thoughts on that. You can just ask them to outright pay for your tail. If they say no to that, which many of them most likely will, then you could also say, alright, well, let’s do it this way.

Let’s say for every year that I am employed with you, you’ll agree to pay a quarter of my tail cost. If I finish out a year and then leave, you will pay a quarter of the tail. If I stay for two years, you’d pay half and so on. And in that way, if I complete 40 years, the employer will pay for the entire tail. I find some employers understand that that is a fair way of doing things. And then you can kind of play with the percentages per year or how much each party pays. But there are some creative ways of figuring out how to split the cost of the tail insurance with the physician and the employer. Most of the time, the physician will not have the choice of either getting an occurrence-based policy or a claims-made policy. Whatever the employer or whatever type of insurance the employer decides to go with, that’s the type of insurance the employee is going to have to use.

Usually, the physician can’t say, hey, I’d like an occurrence coverage if the employer decides to use claims made. The reason why the employer uses claims-made is it’s cheaper. As I said before, an occurrence policy is about a third more expensive per year than a claims-made policy. So, if you’re the employer and you’re going to make the physician pay for their own tail, you’ll say, not only am I going to save a third per year on annual premium cost, but then I’m not going to pay for tail insurance either. Save them some money. There is a kind of a math equation. Let’s say you did have the option of choosing occurrence or claims-made insurance. It’s going to be based on how long you decide to be with the employer.

If you have, say a $6,000 annual premium and occurrence based would be $8,000. So, $2000 more. The longer you are with the employer, the more that would make sense. Whereas if you’re with the claims-made policy, you’re paying $6,000 a year or the employer is, but at the end, the longer with your employer, the tail can sometimes be a little bit more expensive. So, you do need to do the math of, alright, if I’m paying a third more per year, at what point does it make sense to just pay if I plan on staying with the employer for 10 years? Well, that might make more sense to a claims-made policy. Whereas if you’re there for a shorter amount of time, maybe an occurrence policy makes more sense as well. This certainly is something that you can negotiate in an employment contract. And I do think it’s something that most physicians feel is important. It’s also specialty dependent. I mean, if you’re primary care and you’re paying $6,000 in your annual premium, then $12,000 for tail insurance isn’t that big a deal. If you’re an OB-GYN and you’re paying $50,000 a year for your underlying coverage and you must leave and your tail is a hundred thousand dollars, well, that’s certainly something that’s going to get your attention and you may need to discuss the employer.

Nose coverage happens, I would say infrequently, but certainly, it’s not completely unique that a new employer would pay someone’s old tail. So, that’s what claims-made coverage is. It’s kind of a lot of, I guess, complicated scenarios but simple once you break it down into three different types of insurance.

What is a Non-Compete for a Physician?

Are Doctors Independent Contractors or Employees?
Scroll to top