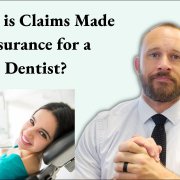 What is claims made insurance for a dentist?  Every dentist needs a malpractice policy while they’re practicing. And there are two common types of malpractice insurance: claims-made and occurrence-based. Claims-made policy means a policy must be in effect when a claim is made. If you’re an employee and you leave an employer, there is a gap in between the last patient you see for that employer and then the last day they sue you. That’s the statute of limitations. And generally, it’s two years in most states; it varies from state to state. And there are also exceptions for when minors become adults and that type of thing.

That’s a one-time payment. It doesn’t go on year to year. You just pay it all upfront. Normally, the employer would require that tail policy would be secured prior to the end of the employment relationship between the two parties. If the employer says, it’s your choice as far as what policy you want to use, it will depend on who’s paying for it. If the employer says, I don’t care if it’s an occurrence or claims made, we’re going to pay the premiums. Then obviously, you want an occurrence-based policy because you won’t have to pay for tail. Most of the time, you don’t get a choice. And most of the time, it is claims made. And most of the time, the employer will require the dentist to pay for tail insurance. Other blogs of interest include:

A couple of ways to handle that. One, you can negotiate in advance to try to get the employer to cover the cost of tail insurance. If they’re unwilling to cover all the costs, one thing that we’ve been successful with is maybe forgiving an amount of it, depending upon how long you’ve been there. Let’s say you have a three-year initial term, then we would say, alright, for every year that the dentist stays employed, one-third of that tail cost is then forgiven. In that way, if you’ve been there for three years, then you wouldn’t have to pay for any of the tail after you left. That’s been an effective way of getting them to cover some tail insurance costs. Another one would be if you were in a state, used an insurance company, switched jobs and the new job uses the same insurance company as the old job, most of the time, they’ll just roll over your old policy into your new one.

In that way, you wouldn’t have to pay for tail. And then the third way of getting out of having to pay for tail is if your new employer pays for your old tail and that’s called nose coverage. It’s not prohibitively expensive for most general dentists. Obviously, if you get into some subspecialties into surgical specialties, that type of thing, it can be more expensive. But it’s not a kind of break the bank type cost. You do not want to go on without a tail policy if you have claims-made coverage. I have had a few people in the past that just said, you know what, I don’t want to pay the tail costs. I’m willing to accept the risk.

And it just seems like a foolish risk to take $6,000 to cover your tail. Whereas a malpractice claim could be many multiples of that potentially. Plus, I just would hate to have that kind of hanging over anyone’s head as well. Anyway, that’s a little primer for claims to make coverage for a dentist.

Is a 2 Year Non Compete Too Long for a Dentist?

How Much Time Off Should a Dental Associate Get?
Scroll to top