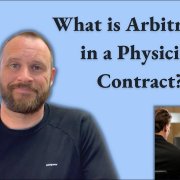 It should be the laws of the state where the physician is providing care. A lot of these private equity and venture capital companies are kind of gobbling up physician practices. And so, many of them could be run out of, let’s say Florida for instance, but the physician is practicing in Texas. Well, in those contracts, usually for those specific situations, it can state that even though the physician is practicing in Texas, the Florida law will be used. You want to make certain it’s the law of the state that you’re practicing in. And then there could also be some language about the venue. So, like where litigation was brought. If someone had to sue the other party, where would it be brought in court? For instance, here in Maricopa County in Phoenix, many of the practices here will just state, if there is a dispute that ends up in litigation, the case must be brought to Maricopa County superior court.

So, what state law is used, what the venue is, and then many contracts, especially those for hospital networks could even list a dispute resolution process. First, it could say, alright, the parties will attempt to reach an agreement through mediation. Mediation is just simply, usually, an attorney or retired judge will attempt to get the parties to reach compromise so that they can move forward with things. It’s not binding. If they’re forced to participate, they could do so passively. But if a settlement can’t be reached, then generally, it can go two ways: the contract could state, alright, if mediation is unsuccessful, then they can just go straight to litigation or it could say, alright, if mediation is unsuccessful, then they must go to arbitration. Other blogs of interest include:

Arbitration is where, once again, either an attorney, retired judge, someone like that will hear both sides of a case, and then they’ll make a binding decision. Basically, the parties are giving up their rights to sue the other and waving any kind of jury trial or anything like that. And no matter what happens, we’re going to arbitrate. The arbitrator is going to render a binding decision. And that is the decision. There will be no court process involved. Is it unfavorable to one side or the other? Well, strategically, most of the time, I think the prevailing theory is that most juries are more sympathetic to the employee. In this case, it is the physician versus the big hospital network conglomerate. I would say, in that matter, yes, that’s true, but litigation can also be lengthy and expensive, and arbitration can cut down, one, on the litigation costs and then two, time more than anything. And arbitration can happen very quickly, whereas litigation can last years. And I find that most physicians don’t want that type of thing hanging over their heads. If there is major dispute, they just want to get it resolved and move forward, most likely with a different employer, but they still don’t want to have to always think about the pending litigation.

I don’t think it’s unfair one way or the other. Generally, the arbitrator will be agreed upon by both parties, meaning, they’ll be neutral in most respects. And then there’s limited discovery, which means a sharing of documents. It’s kind of like pared-down litigation. And then after the arbitration is over, usually, the arbitrator will render a brief written summary and then render their decision of what it is. It could be just a monetary award which is normally what it ends up being. So, that’s what an arbitration clause is in a physician contract. I don’t think a physician could be scared about signing this or thinking it’s unfavorable.

Most of the time, the smart people who put the arbitration clauses in will say exactly who they’re going to use, or what type of arbitration. You could do AAA, JAMS, AHLA, which is the American Health Lawyers Association, also has a good arbitration process. Maybe there’s an arbitration process in the county that the physician is working in. Sometimes, they’ll have that in there as well. But usually, it will be spelled out for an arbitration clause to be enforceable. Usually, it needs to be, at least in my opinion, should be lengthy and should really be outlined like you are giving up your rights to sue. You are giving up your rights to a jury trial. Some that just kind of stick a sentence about arbitration, generally, would not be enforceable.

How Much are Resident Physician Salaries?

Backing Out of a Physician Contract
Scroll to top