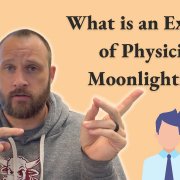 Today, I’m going to talk about some examples of moonlighting for a physician. There are two things to think about. When a physician signs an employment contract, it’s very likely there’ll be a clause in there that is listed as either exclusivity or outside activities which prohibits the physician from doing any kind of moonlighting, locums, side work at all involving the practice of medicine without getting the written approval of the employer. We’re going to get into that in a second. Now, moonlighting as a physician in general, means they are working for another employer outside of their main full-time job. Shift work, specialties are probably the ones that do this the most.

So, ED, hospitalists, if they’re working seven-on/seven-off, which is a normal schedule for an emergency medicine physician or a hospitalist. If they have that seven days off, then many times, they’ll want to pick up shifts elsewhere. And in that case, that would be considered moonlight. Now, going back to if a physician is employed, let’s just take a hospitalist employed by a hospital. The physician is employed with a hospital and signs an employment agreement. The employment agreement is going to state this is your exclusive employment, this is your full-time job, this is the only job you can have without getting our written approval in order to do something else. In that situation, if the physician wanted to work outside the organization, maybe doing some locums or picking up shifts at another local hospital, the employer would have to say, yes, we agree that you’re allowed to do this.

Many employers just don’t want to deal with issues if that physician isn’t insured or maybe the physician doesn’t even understand that they need insurance for that position. Whoever is hiring them to do moonlighting should know that they need a different policy as well. But that’s one of the main concerns why employers don’t let people moonlight or do locums without having proof that they’re going to be insured in that position. Another consideration is competition. Many employment agreements will state that the employee cannot compete with the employer during the term of the contract, and after the contract terminates as well. It can state specifically, no matter what, you cannot work with a competitor organization during the term of this agreement. And that could be different than the actual non-compete, which will then take effect after the agreement ends. Let’s just take the hospitalist as an example as well. The hospitalist works for one hospital. The employment agreement could state, you can’t work as a hospitalist within the county that the hospital is in or within 15 miles or something like that.

If you think about it, there’s no competition amongst shift work physicians, and people that work in the ED or hospitalists. It’s not like you’re going to steal a patient base from a hospital or anything like that. The biggest concern would be, let’s just say someone was a primary care physician employed by a hospital. Their clinic is off campus somewhere. What they wouldn’t want to do is have that physician work at another primary care practice in the area, maybe just on the weekends or something like that, build up at least some kind of patient base and then potentially terminate the contract with the employer and then move over to whatever job they were moonlighting with and maybe take the patients with them. Now, there will be other clauses in the contract that prohibit that. There will be a non-solicitation agreement.

As I said before, there’ll be a non-compete, but in the non-shift work positions, the fear of the employer is that if they are going to do moonlighting, they will establish presence somewhere else, and then ultimately take those patients with them when they leave the original employer. Moonlighting can also take the form of, once again, let’s say there’s a hospitalist that works at one hospital, however, they’re in a larger network. And then there are other hospitals within the network that they could pick up shifts at as well. In that scenario, normally, you would not need written approval to do that. Most contracts will state the providers are allowed to pick up shifts within the network without any need for approval.

Because normally, the malpractice policy would cover all the network, not just one hospital. And so in that scenario, it would be fine that the only reason why, once again, let’s say it’s hospitalists, they would want to pick up shifts elsewhere, outside the network. Let’s say they have an opportunity to pick up additional shifts either at their own hospital or maybe in other hospitals in the system. Why would they go outside? Well, it’s money. You’ll generally get paid more if you’re working in a locum tenant’s position. And maybe you’ll make 1500 a shift within the network, but then if you work a locums job, you’ll make 2200 shifts, something like that. So, that physician would want to work outside the organization simply because they can make more. Anyway, that is some examples of moonlighting for a physician.

What is a Non-Compete for a Physician?
Scroll to top