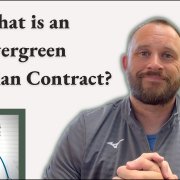 What is an evergreen physician contract? In brief, an evergreen contract simply means that the contract will continuously automatically renew for a time and will just keep going forever until one party terminates the agreement. There are a lot of moving parts to this. Let’s just start with what is a term of a contract. Usually, there’ll be some specific length to the initial part of a contract. Somewhere between one to three years is kind of a normal length. Now, almost all contracts will not be a fixed term, meaning, it’s one year, two years, three years, and then it stops. Almost all physician contracts will say, the initial term is two or three years, and then it will automatically renew for one-year successive terms after that until terminated in the way that the contract allows termination.

There are usually three ways a contract can be terminated. Well, I guess four. If there is just a fixed term and there’s no automatic renewal, if the contract ends and the parties don’t come to you with a new agreement, the contract ends. Another way to be terminated is through mutual agreement. Another way would be with cause. Meaning, if one party breached the agreement and then didn’t fix that breach at some point, then one of the parties can terminate the agreement with cause, and usually, that could be immediate. And then the last would be without cause termination. This is by far the most common way the contracts are terminated. Without cause means either party can terminate the agreement for any reason, with a certain amount of notice to the other party.

In most instances, it’s between 60 to 90 days. The contract will state, let’s just say the physician is unhappy or maybe they have a better job, or they want to move back for family reasons, they would simply give written notice to the employer that just says, I’m terminating the contract without cause. I’m providing you with the 90 days’ notice that’s required in the contract. My last day of work will be this date. They work out the 90 days and then they leave. Those are the different ways that you can terminate a contract. Now, what I’m seeing more and more is instead of there being an initial term, it just continues forever unless terminated by either party. They don’t even have an initial term listed. Is that a problem? No. If there’s without cause termination provision in the contract, I mean, you can think of it as if it’s only a 90-day contract. Other blogs of interest include:

Now, that’s not how it works, but if it is an evergreen contract with no fixed term, it just continues forever until it’s terminated. That’s fine if you do have the ability to give without cause termination. If I see a physician contract without cause termination clause, it’s an enormous red flag and I would never ever have a physician sign a contract like that. Now, if they’re a J-1, it’s a three-year requirement. In that scenario, many states will prohibit any kind of without cause termination clause in the contract. But for most physicians, it needs to be in there. I mean, if you’re unhappy with an employer and there’s, let’s just say there’s a two or three-year term, no one’s going to want to stick out an employment in a scenario where they’re just very unhappy for two or three years.

It just doesn’t make sense. Another consideration is most of the time, if the physician is going to receive a bonus, either relocation assistance, signing bonus, or student loan repayment, there’s going to be some period that they’re going to be required to work for the employer, or they’re going to have to pay back a portion of that bonus. In this case, let’s say there’s a three-year initial term and then the physician receives a $30,000 signing bonus. The employer may say, alright, one-third of that bonus is forgiven every year until the end of the three years. And then, at that point, you don’t owe us anything back if you were to leave. The same goes for the other bonuses. It could be monthly repayment, quarterly repayment, or yearly repayment. For the physician, it’s better if it’s monthly, because if you were to leave in the middle of a year and it was yearly forgiveness, then you’re losing out on an entire year of forgiveness. Whereas if it’s monthly, you’ll get forgiven all the way up until whenever you ultimately leave the job. So, evergreen contracts simply go on forever until terminated by the parties, in whatever mechanism they choose, either mutual termination, without cause termination, or for cause termination. Is one better than another? I don’t really think there is. If you can get out of the contract without cause at any time. But anyway, every contract is different, so it has to take into context the entire arrangement to determine if it’s a good opportunity or not.

Can an Arizona Teacher Break Their Contract Mid Year?
Scroll to top