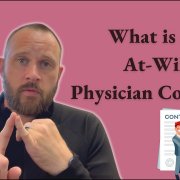 What is an at-will employment contract for a physician? At-will employment in general means that either party can terminate the agreement at any time, without any notice for any reason. Most people think of it as an at-will employment arrangement as most nurses, and I’ll just use healthcare as an example. So, techs, nurses, administrative staff, they’re not on employment agreements, they’ll just become an employee. And then, at any point, if the employer doesn’t want to employ them anymore, they just terminate them and let them go. And there’s really nothing the employee can do about it. Potentially, an employee could have a claim for wrongful termination or retaliation or something like that.

But for the most part, at-will just means you can get rid of them at your will. Most physician contracts are considered at-will as well with the caveat. In almost any physician contract, there’s going to be notice requirement and it’s done for a couple of reasons. For the most part, there will be what’s called without cause termination in an agreement, and that will state, at any point, either party can give a certain amount of notice to the other and terminate the agreement for any reason. And so, that would be the at-will part of it. It’s an at-will but with the short notice required. For most contracts, it’s usually 60 to 90 days. Let’s just have a scenario where physicians are unhappy. They got a better opportunity, and they want to leave.

They just must provide a written notice to the employer, saying, per the agreement, I’m giving you 60 days’ notice that I intend to terminate the contract. My last date of employment will be this and that’s it. Now, there can be some things attached to terminating a contract that every physician needs to think about: the whole reason behind putting at least some notice is one, so the employer can attempt to find a replacement for the physician. Two, if the employer terminates the physician without cause then that physician will still get paid for whatever that notice period even if the employer doesn’t want the physician to work with them anymore. Other blogs of interest include:

Continuity of care is also something that absolutely needs to be thought about. If a physician, let’s say, they’re in psychiatry and they have a very vulnerable patient population, then medications are involved with every patient. If the employer fires the physician with no replacement or no plan in place to transition the patients to a new provider or to provide bridge scripts or any of that, that’s a patient care problem. So, having that little notice period allows both the physician and the employer to put steps in place to ensure there’s at least a continuity of care plan to transition patients either to a new provider that may already be employed with the employer, or ship them out to another physician. Some of the things that a physician needs to think about, even if you terminate the contract without cause.

Even if you’re at-will, and you say, I’m not interested to be here anymore, there are still some things that can follow you. One, the non-compete, the non-solicit, those will follow you, whether you’re terminated, you terminate the contract without cause or not. Many of the contracts will state if the employer terminates the physician without cause, the restrictive covenants won’t apply. Restrictive covenants are the non-compete and the non-solicit. That’s one thing you want to get added if it’s not in your contract. Another thing to think about could be repayment, obligations for bonuses. Most contracts will state if the physician is provided signing bonus, relocation assistance, or maybe student loan assistance, and they don’t stay for usually the initial term, which could be two to three years, they’d have to pay back some prorated amount of the bonuses.

And then insurance. If it’s a claims-made policy, maybe the physician has to pay tail as well. There are a lot of things to think about when a physician terminates a contract. And just because it’s an at-won’t mean there won’t be some negative percussions after the contract is terminated. You always need to think about what’s the without cause termination, how much will I have to pay back in bonuses? What are the restrictive covenants that’ll follow me, and do I have to pay for insurance?

Do you Need Tail Coverage for Occurrence?

How Important is Tail Coverage?
Scroll to top