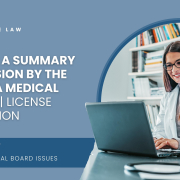 What is a summary suspension for a physician licensed with the Arizona Medical Board? What does that process look like? And what can a physician expect if they find themselves in a proceeding to suspend their license summarily?

A summary suspension is an emergency action the Arizona Medical Board takes. Suppose they believe that public health, safety, and welfare require emergency action against a physician’s license to restrict all or some of their practice. So, this is an action the board takes before the allegations of unprofessional conduct are fully investigated. The physician has had an opportunity for a formal interview or hearing on the allegations.

Suppose the board staff receives a complaint with serious allegations. If they’re concerned about the physician’s ability to practice, they can offer an interim practice restriction. To prohibit or limit some of that physician’s practice activities while they gather more information about the allegations.

Say a physician refuses to sign an interim practice restriction offered by board staff during the investigation. The board staff’s recourse at that point is to proceed with a summary suspension of the physician’s license. This again is asking the board to suspend and restrict the physician’s ability to practice pending a formal administrative hearing into the allegations.

Suppose the board summarily suspends a physician’s license and finds that emergency action is required to protect the public’s health, safety, and welfare. The physician has a right by statute to have an administrative hearing on the allegations. And within 60 days of the summary suspension. At that point, should the board vote to immediately suspend the physician’s license, they would refer the matter to the office of administrative hearings for a full evidentiary hearing.

By statute, that hearing must be held within 60 days of the summary suspension by the board. Should you find yourself under investigation by the Arizona Medical Board. Or in the process of summary suspension proceedings or a subsequent formal hearing after you’ve been summarily suspended. Please do not hesitate to contact our firm if you need advice or assistance.

Can You Sue Someone for Filing a False Complaint With the Arizona Medical Board?

Hi, my name is Robert Chelle with Chelle Law. My firm represents physicians before the Arizona medical board and the osteopathic Board. We’ve been representing healthcare providers in Arizona for over a decade now. And one thing that comes up semi-frequently is the question. Can you sue someone for filing a false board complaint in Arizona? Pretty simple question. The answer is yes, but there are some caveats we will go over right now. Every Board has a statute. They’re in Arizona revised regulations, which lay the groundwork for what the Board can and can’t do. In the law for the Arizona medical board, there’s a section. I will read it, which says any person or entity that reports or provides information to the Board in good faith. That person is not subject to an action for civil damages.

In summary, anyone who files a board complaint in good faith can’t be sued for civil damages. The most important part of that section is good faith. What is good faith? It means if someone honestly believes that the physician committed misconduct, did something illegal, or violated the statute. They’re immune from civil damages. The only way that a physician could sue someone for filing a board complaint is if it was false and in bad faith. People can file a reasonable faith complaint with bad intentions. You could have a patient who wants to stick it to the doctor, a competitor physician who’s doing the same, or an employer who is somehow upset about their relationship terminating.

If any of those people filed a good faith argument, they believed that whatever the physician did could violate the statute. They’d be immune from a civil lawsuit. If you sue the person, you must prove they acted in bad faith. They knew that what they were alleging was false. Potentially they made up falsehoods and used that as a basis for a complaint.

There was a case in the mid-two thousand. That kind of worked its way up to the court of appeals in Arizona. And basically, it was one physician who filed a board complaint against a competitor physician. They’re in the same specialty, fighting for patients in the same area, and alleged some things. And the physician who had the complaint. I filed against him and filed a lawsuit against the other doctor. They stated that the other party did not submit the complaint in good faith.

Are There Any Mistakes Physicians Make?

And therefore, he suffered some damage. I’m just going to read what the counts of that lawsuit are. Right? Some counts for the lawsuit are:

We have a case currently with the Arizona medical board. We’re representing a client, and I won’t get into the details of it. However, I can give broad strokes. In this case, a patient alleged that our client gave them on a certain date, a specific procedure. Then, there was a negative outcome during the process after a review of the medical records. Our client never saw the patient on the alleged date. Never even provided the procedure alleged by the patient. And then, obviously, the bad outcome didn’t occur either. So, did that person file a complaint in bad faith? Well, we believe, yes. As I stated before when looking at whether a complaint is filed in good or bad faith. Do you need to determine whether the person who filed the complaint attempted to verify any information?

In this case, obviously, no. What could someone do to verify the information? They could call the office and prove when they saw the physician. Request the medical records, review those, and talk to the people involved. A minimum base amount of effort needs to be given to verify allegations. And if the complainant, the person who files a complaint, doesn’t do any of that. Then that indeed allows whoever had the complaint filed against them to argue that it was filed in bad faith.

It is a reasonably nuanced topic. In summary, can you sue someone for filing a false board complaint in Arizona? The answer is yes, you can, under certain circumstances. But it’s an exciting topic to discuss. As I stated, my firm Chelle Law represents physicians before the Arizona medical board and osteopath boards. If you have any questions, we’re certainly happy to answer them. Just give us a call, the number is listed below in the description, or you can visit us on our website, Chelle law.com, C H E L L E law.com. Hopefully, this is informative. Please comment if you have suggestions for other topics you want me to discuss. I’ll be happy to do that. So anyway, thanks for listening, and take care.

If the Arizona Board of Nursing believes a nurse cannot practice safely, they can initiate a summary suspension. The legal standard in Arizona is that public health, safety, or welfare imperatively requires emergency action necessitating the immediate suspension of a nurse’s medical license. Examples of activities that can lead to a summary suspension:

There are three ways the Arizona Nursing Board can Suspend Your License. The Arizona State Board of Nursing (“Boar”) protects the medical welfare of the people of Arizona. They do this by ensuring each professional who holds a license as a nurse in Arizona can practice safely. The Board can suspend a nurse’s medical license in several different ways.

If the Board suspends a nurse’s medical license, the nurse must immediately cease providing care as a nurse. If you’re interested in learning more about our Arizona Nursing Board Appeals services and how to protect your rights, set up a consultation with Chelle Law and our Arizona Nursing Attorney, and reach out to us today.

Can a Nurse Continue to Work while Under Investigation with the Arizona Nursing Board?

NURSYS is the only national database verifying nurse licensure, discipline, and practice privileges for RNs and LPN/VNs licensed in participating boards of nursing. Including all states in the Nurse Licensure Compact (NLC). Under current laws, nurses cannot remove past discipline from NURSYS. In 2018, the Board moved license verification from the Board’s website to NURSYS. Previous Board policy removed all disciplinary actions from a nurse’s record after five years.

Examples of formal discipline from the Board include:

Investigation and Complaint into Practice Concerns

After receiving a complaint or self-report, a nurse gets an Investigative Questionnaire and notice from the Board. They are requesting additional information and response to allegations found in the complaint. From here, the AZBON assigns an investigator to the complaint and begins collecting evidence. The documents and evidence collected include:

When a nurse receives a Board of Nursing Investigation Notice, it’s crucial for them. To understand the process and how an attorney can help. When the Board of Nursing receives a complaint against a nurse, they will investigate the problem. This allows them to fully determine whether or not they need to discipline the practicing nurse. Depending on the results of the investigation, the Board can suspend, limit or revoke the nurse’s license or certificate.

When Is Discipline From the Arizona Medical Board Removed From the NPDB? | NPDB...

Non-Compete Agreement (Should You SIGN One?)
Scroll to top