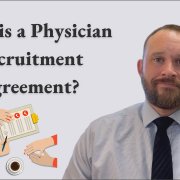 I don’t think I’m going to get into all the specifics of what is necessary to bring a physician in. With this video, I’ll focus more on what’s in the recruitment agreement itself. On the basic level, a physician will get a job with a physician doing practice in an area, and then, by being in that area and practicing in the area, the hospital can supplement their income or through bonuses, overhead expenses, and assist the practice that’s employing the physician, with kind of offsetting the cost of that physician in the first year. What do they normally offer? Well, the recruitment agreement could contain a signing bonus, relocation assistance, and then normally it would be income guarantee. As I said before, they would set a number, and then let’s just say it’s a $20,000 signing bonus, a $10,000 relocation assistance, and then a $200,000 income guarantee.

I mean, the main reason is, a physician normally depends upon the situation. Are they replacing a physician? Is it a brand-new office? Is it a new specialty they’re using? All those factors go into determining whether a physician is profitable in year one. But normally, it takes 12 to 18 months for a practice to reach maturity, and so a physician will likely lose practice money during the first year and having the supplement from the hospital assist the physician practice, kind of getting over the hump to when the physician is profitable. Why does a hospital do this? The downstream revenue that they would receive from the referrals from that physician is kind of the reason why they would do this. If a physician establishes referral patterns to a certain network or a specific hospital, that hospital is going to reap the benefits of having those patients referred to them. And then, doing the financial calculations, they would then benefit over time with the referrals versus providing $200,000 to the physician’s first year. I think these present some, and when I say ‘these’, I mean recruitment agreements can present some difficult and complicated problems. It helps if the hospital lists things that the employer can’t do in the recruitment agreement. So, having the hospital state, you cannot have a non-compete, is helpful and provides some leverage for the physician. Making certain that both the practice and the physician are joint and separately liable for that outstanding amount helps as well. Having a shorter forgiveness period, that’s certainly beneficial to the physician as well, so that they’re not stuck if they’re in an unhappy situation for a longer time.

I would be very careful if you’re coming out of training, and you’ve been presented with both and that you must execute simultaneously. I mean, it’s self-serving for an attorney to say, yes, you should get it reviewed. You absolutely should get both reviewed if you’re a physician looking to get into this type of situation. I’ve had plenty of people call me after the fact and say, I hate this job, there’s a $500,000 amount that must be forgiven, I have no options, what do I do? And that is a terrible situation for a physician to be in. So, just be careful.

How Does a Physician Income Guarantee Work?

What is MGMA Physician Compensation?
Scroll to top