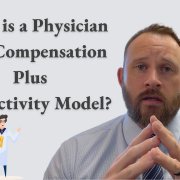 Physicians Base Salary Plus RVUs

You have the 120 annual base, right? And just divide that by 12. And so, you have 10,000 a month and then after the quarter, they’ve paid you 30,000. In addition, at the end of that, they would say, alright, did you generate 1500 RVUs? Then anything above that, you would then get multiplication where they’ll take the surplus RVUs times compensation factor, and then you would get that as a bonus at the end of the quarter. Now, in that scenario, that’s not a way that most places would do it, because most physicians are not going to be okay with getting a small base each month and then a big windfall at the end. Other blogs of interest include:

Until we can kind of take a total look at all of it, there’s no way of knowing what’s the best in your situation. Then also there are employers who just say, this is the model we’re using. And you must deal with that as well. In that case, if you know what the model is, and that they’re not going to change the model, the one variable that they can change is the numbers used. The RVU threshold, the net collection percentage, what the base straw is, those are all the things that can change that can determine whether it’s a great opportunity for a physician or not. That’s a brief example of a base compensation plus productivity model for a physician.

Physician compensation models that are pure percentage of collections. We’ll kind of work through how that works and then how the physician is compensated in those types of models. I guess as an initial matter, if a physician works for a hospital or healthcare network, it’s very rare that they would be compensated just based on net collections, that doesn’t happen. Most of those organizations, if they’re going to use a productivity model, it’s going to be via RVU based compensation. The kind of organizations that use net collections the most are smaller physician own practices, and it’s also specialty dependent as well. I find dermatology, anesthesiology use net collections the most in their compensation.

Or like I said before, the insurance company doesn’t pay, there are write-downs. Maybe for whatever reason, charity care-specific situations to practice will discount a bill. And any of those scenarios, those things are passed through to the physician. A physician could do a service, but if the company is not paid, the physician will not reap the reward of those collections. Now in an RVU based compensation model, it doesn’t matter about collections. It’s simply what does the physician do, what are the encounters that they did, and then what are RVUs generated. That one thing to consider is how efficient is the billing for the practice that you’re joining. If they are bad at collecting, it’s going to affect you as well.

It’s most likely not going to be more than that. I don’t recall ever seeing a net collections-based agreement over 45. In that scenario, you do have a base, so there’s a minimum amount. However, if you’re ultra-productive, then you’ll also kind of reap the reward of that from the collections you get. A monthly way of doing that is the most common. They could also do it quarterly. It would be rare for a place to do that on an annual basis. The physician generally wouldn’t accept that because they would have kind of a smaller amount throughout the year than they’d get, or at least theoretically, they would get a big check at the end of the year. Most people would prefer getting it spread out over the year than one big lump at the end of the fiscal year or calendar year, depending upon how the employer does it. Are net collections-based agreements fair? Certainly, they’re fair, it just depends upon what’s the actual number and then what are the different thresholds as far as what you get. If it’s an absolute pure net collections model, which is the kind of the second way of doing it, you simply get paid everything that you collect and then multiply by that percentage. The problems with that are usually just at the beginning. Like an average accounts receivable cycle from when a physician has an encounter to when the practice gets paid, is usually anywhere between like 30 to 90 days.

What is the Most Common Physician Compensation Model?

Physician Compensation with a Percentage of Collections
Scroll to top