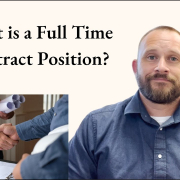 Now, if you are a full-time or in a full-time contract position, the only thing that really differentiates you from someone else is they have employees that are paid as W2 employees. At the end of the year, they’ll receive a W2 which shows all the compensation that they received and then all the taxes that were taken out. Whereas if you’re in a full-time contract position, you’re classified as an independent contractor, and then at the end of the year, you’re going to receive a 1099. And as a contractor, no taxes will be taken out of any of the compensation that you received. So, at the end of the year when you file your taxes, you are responsible for paying the state and federal taxes associated with any compensation that you received. Many times, if someone is acting in a contract position or as an independent contractor which is really the same thing effectively, they can’t transition into a full-time permanent position.

Benefits of both Full-Time Contract Position and Regular Position

But in that scenario, it’s extremely likely that you’ll then transition from an independent contractor into an employee, as I said before, where you received the W2. What are the benefits of both? Well, in a contract position, at least if you’re doing part-time work, you can work for whomever you want, whenever you want, and your schedule is completely up to you. Whereas if you’re working in a full-time contract position, you’re going to sign an independent contractor agreement of some sort. And then in that agreement, it’s going to state what the expectations are as far as your time commitment to the organization you’re working with. And so, many of those agreements will state you can’t have outside employment without written approval from the organization you’re working with. The entire point of being an independent contractor is for it to be quick in, quick out, and can work for multiple people at the same time.

Whereas as an employee, especially as a professional, there’s almost always either exclusivity or outside activities provision, which would then prevent the professional from working in multiple locations or for multiple organizations at the same time without written approval from the employer. So, keep that in mind. One of the main differences between being an employee versus a contractor is just that you’re going to have some restrictions based on who you can work for and when you can work. Now, one other consideration as an employee and a contractor, especially as a full-time contract position, is that there very likely will be restrictive covenants in whatever agreement that you signed. Restrictive covenants prohibit the independent contractor from doing certain activities during or after the contract ends. The most common restrictive covenants are non-compete, non-solicit, and non-disparagement. For most people, the non-compete is the most important part.

And yes, you can have a non-competition clause in an independent contractor agreement.  There are a few states where non-competes are completely unenforceable. So, I would check with whatever state you’re in that makes certain that you’re not in one of those states. And even if you did sign a non-compete in one of those states, it’s very likely it would be unenforceable. However, most states do have some enforceable non-compete either through their case law or in their administrative code or statutes, or regulations. It’s called different things in different states, so be very careful about how it’s worded. I find that for some of the healthcare professions, it’s much more limited, whereas if you’re in sales it could be very broad, meaning they want to knock you out from the entire state of doing things for similar employers.

What you want to do for any non-compete is get it as specific as possible, meaning the scope of it should be the specific thing that you’re doing for that organization. So, if you are in software sales as an independent contractor, then it needs to say you can’t work in software sales, not any sales. Or if you’re in a full-time contract position doing IT work or doing graphic design or whatever it is, it needs to say specifically what you’re doing for that employer. That way you have some options to do some other things after the contract or agreement ends. So, that’s what it means to be a full-time or in a full-time contract position.

While such a contract agreement may seem attractive to most people, it is essential to dive deep into what this independent contractor agreement entails. And how it differs from a traditional employment contract. This way, you’ll get to know what to expect and how to handle yourself during the contract duration. In this blog post, we will discuss:

What Is an Independent Contractor Agreement?

It is important to note that independent contractors are not employees of the company they are contracting with. Instead, they are self-employed individuals who provide services to that company. This can breed confusion, primarily if you’ve never worked as an independent contractor. You may have questions about what’s fair and reasonable and how to work with what’s provided and what’s not provided in the contract. If this is your case, you should consider consulting an experienced physician contract lawyer to help you review the contract. And guide you on all you need to know before signing the agreement.

Is a Physician an Independent Contractor?

A physician can be an independent contractor or an employee depending on the contract agreement they signed when starting their job.

The vast majority of physicians are employees meaning they signed an employment contract. However, some specialties, such as dermatology and anesthesiology, are more independent contractors.

As discussed below, there are three significant differences between an employment agreement and an independent contractor agreement.

If you sign an employment contract agreement, you must complete the w-2 tax forms. This means that taxes will be deducted directly from your salary. While if you sign an independent contractor agreement, you’ll be paid full compensation. However, you’ll be required to complete the 1099 tax forms to pay off your taxes on your own at the end of the year.

An employment contract offers benefits such as life insurance, health insurance, disability insurance, paid time off, retirement plans, and Continuing Medical Education (CME) reimbursement. In contrast, an independent contractor agreement doesn’t offer any company benefits. However, you may be eligible for a higher salary and compensation factor for relative value units (RVU).

Before signing an independent contractor agreement, you must understand what you agree to. This way, you can know what to expect and be sure the contract agreement is fair to you as it is to the hiring company. The first step is reviewing the contract and negotiating where needed. To make this even much easier for you, you should consider consulting an experienced healthcare attorney who can review and advise accordingly. Attorney Robert Chelle is a professional contract attorney who has helped many healthcare workers review their independent contractor agreements. He can help you too. Feel free to reach out today.

Remember, as an independent contractor. You’re free to work for multiple entities simultaneously, meaning you must be careful not to breach your contract by working with a competitor of your hiring company. If you breach this agreement, you may face the consequences, such as being sued by the hiring entity.

Can You Work for a Competitor if You Have Already Signed a Non Compete in A...

W2 Contract (What Does it Mean to Work as an EMPLOYEE?)
Scroll to top