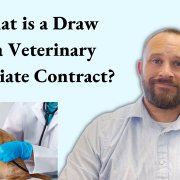 What is a draw in a veterinary associate employment contract? A draw is related to compensation. Basically, it means how much money you are going to make each month in some way. Let’s kind of talk about the different compensation models and then when a draw would come into play. Usually, the vet would have a guaranteed base for at least the first year or two of their contract. It’s very unlikely that you would come into a new employment opportunity and just have straight productivity. In the veterinary arena, it’s almost always calculated through net collections. Net collections are any of the money that the practice receives for the vet’s personally performed services.

Whatever they collect, that’s what would be considered net collections for that vet. And one common way of doing it is let’s just say you have a one-year guarantee, and the reason why they do that is it takes time to build up a practice. Now, I guess it’s depending upon what specialty you’re in, but for the most part, let’s just say you’re a general vet. You’re not just going to hop into practice and have an immediate client base. It takes a while to build up. So, they’ll give you a guaranteed base in year one. Then after year one, they’ll probably switch you to productivity/net collections model. And that’s when a draw would come into play. The veterinary industry utilizes the pro Sal method commonly. And it’s kind of a methodology for a veterinary practice to pay their employees which allows them at least a small profit margin.

And in that method, they will basically take a projection of what your net collections would be. And the vet would then receive a smaller percentage of that per month. And then there would be a reconciliation or true up at the end of the year. Let’s just go through some examples. Let’s say the vet is making 120,000 per year in their first guaranteed base year. And then they collected that amount as well. While under pro Sal, they would maybe knock it back to 80%. You would make 10,000 in that scenario per month. And so, they would say, alright, what is going to knock it back to 80%? And then the vet is going to get a draw of $8,000 per month. And throughout the year, they’ll make 8,000 per month. And then at the end of the year, they’re going to take whatever the total net collections were for that vet versus what was paid out.

In that scenario, 8,000 times 12 minus 6,000. And then if there is a difference, meaning, if they collected more, they would then get a percentage of those net collections. Now, the downside is if you are in a negative balance, meaning, if you collected less than they paid out, they generally are going to make you pay that back over time. And what they’ll normally do is they’ll take however much you’re in the deficit for. Let’s just say it’s $6,000. Over the next three pay periods, they might take 2000 out of your paycheck until you’re back to zero. Is that fair? It just depends. Obviously, no one wants to employ any employee that doesn’t cover their own salary and expenses.

Now, if there are some underlying problems as to why a vet is not as productive and this is big in the vet industry right now due to lack of staffing. If you can’t get the vet techs, if you can’t get the front office staff, if they can’t have any efficient workflow and the vet is doing all the things that they didn’t have to do before, that will slow them down and their collections are going to decrease. Just a side note: you need to make sure there’s language in your employment agreement that states the veterinary practice will provide you with proper support to make your practice efficient. Back to the draw, it could change over time. Let’s say, you had a 120 base and then you moved into a kind of a decreased percentage per month as your draw, but then you collected 160,000.

Well, then they would probably bump up your draw to 120,000 and then they would do another reconciliation at the end of a year. There are a ton of different ways to calculate compensation in a veterinary associate contract, but that’s probably the most common way when it comes to productivity. I also find many vets are just paid a straight base no matter what for year one to year five. And that makes it simple, to be honest.

What is Occurrence Based Insurance for a Dentist?
Scroll to top