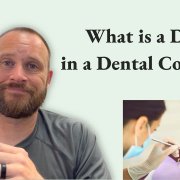 What is a draw in a dental contract?  For the most part, a draw would be associated with productivity-based contract. For instance, some dentists, especially dental associates who are relatively new, would just get a daily rate or maybe a base salary. But at some point, it’s very likely that the compensation will switch from income guarantee into a productivity model involving net collections percentage. Net collections simply mean that you will get paid a percentage of whatever the practice collects from your specific services. As far as what a normal percentage is for a dentist, I would say anywhere between the high twenties all the way up in the low forties is probably a good standard range.

Let’s just say, for example, the practice would bring in $50,000 in a month that is attributed to the dentist’s personal services. Then if it was a 30% net collections rate, they would just multiply the $50,000 times 30%. Then that’s what the physician would take home whenever it was paid out. Now, a draw flattens out the amount. So, there’s not as much variance between a month to month. And so, what will happen is the dentist or dental associate will then reach an agreement with whoever the owner is. And instead of just saying, 15 days after the end of each month I get paid, whatever it is, they would come up with a base amount. Let’s just say it’s $8,000, and they’ll both agree, no matter what happens, I’m going to get paid $8,000 a month.

And then either at the end of the month, or usually it’s done quarterly, there will be a reconciliation, and then they’ll take what I was paid out versus what I was collected based upon my services. And then whatever the difference is that amount is then multiplied by 30%. Let’s just say your draw is 8,000 a month. And then you brought in 32,000 in the month. Then it would just be 32,000 minus 8,000. So, you have 24,000 multiplied by whatever the percentage was. If it was a third, then you would get another 8,000. You’d have a total of 16,000 for the month. Now, maybe there’s a month when the dental associate went on vacation and didn’t work for two weeks. That also happens where you could have a negative balance carried forward. Let’s say you only brought in 7,000 in the month and they paid out 8,000. Then most of the time, the contracts would state that that negative $1,000 would then carry over into the next month. Other blogs of interest include:

And then the dentist would have to cover the difference between the two. That’s how a normal draw for a dentist is defined. Now, I guess the other way of defining it would be if there’s just an owner of the practice, and instead of having a base salary, you just take an owner draw of whatever the profits were. But I find as far as discussing what’s a draw in a dental contract, the first part where the dentist has percentage of net collections, and then to even it out, they just take that draw each month.

Is a Physician Letter of Intent Binding?

What is the Most Common Medical Board Complaint?
Scroll to top