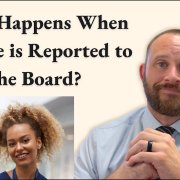 What happens when a nurse is reported to their state board?  First, this is going to be a general overview of any kind of nursing board investigation. It’s not going to be state-specific. Every board does things differently, but the general process is mostly the same amongst all the boards. I’ll just kind of give a brief overview of how the process generally works and then some things to think about from the nurse’s perspective. As far as the first step, someone will file a complaint. That’s one way an investigation initiating. It could be a patient, a colleague, or your employer. Many states have criminal reporting requirements. In some states, if a nurse is charged with a crime, they must report it to their board and others, if the nurse is convicted of a crime, then it’s reported, some states, they must report it immediately, and other states only until renewal.

So, you need to look and see what the criminal reporting requirements are. And then there are also self-reports for substance abuse issues, nurses dealing with alcoholism, drug abuse, and mental health issues as well. And most states have confidential monitoring program that can assist the nurse in getting over whatever issues they have. Let’s just say someone files a complaint, the nurse self-reports. Whatever reason the investigation is initiated, the first hurdle is, does the board have jurisdiction over what the complaint is about? There are certain things the board can and cannot investigate. And so, kind of the first analysis from the board is, do we have jurisdiction over this nurse?

Most of the time, the answer is yes. Very rarely it is no. Let’s just say that hurdle is overcome. What will happen is the board will then notice the nurse and let them know a complaint has been filed. And either they will send a questionnaire that needs to be filled out and sent back in, or they may say, just sit tight and we’ll contact you when we’re ready to move forward. In the investigation, some boards will kind of investigate every single complaint and others are better at triaging complaints and then getting rid of them before a full investigation takes place. In this scenario, let’s say a full investigation is going to take place here. So, in the response, at some point, the board is going to want a written statement from the nurse. This is tricky. Other blogs of interest include:

I find most nurses want to overshare. They want to put down 10 pages of explanation, grievances sometimes with the employer or coworkers. I don’t think this is beneficial to the nurse at all. For a couple of reasons, one, you don’t want to give anything to a board if they don’t have it, meaning, you don’t want to admit to things that the board has no idea happen, or some nurses inadvertently admit to doing things that they think are completely fine. But when you look closer at the statutes, which are the laws that dictate what the board can and can’t do, and then what the violations are, it may be a violation of the statute and they didn’t even realize it. I think less is more as far as a written response. And then one kind of problem that we have is that the boards always want a response quickly, but we don’t always have access to the documents, or I guess, we almost never have access to the full documents until after they want the written response.

Many times, we’ll just say we will supplement with a more substantive statement once we have access to the file at the board. It could be medical records, employment files, disciplinary history, for criminal stuff, we can usually get ourselves, so we don’t need to wait for the board to do that. Alright, so you’ve sent in the response short and sweet. At that point, usually, the board is going to send out subpoenas, which is a request for documents to the employer for your employment file. And then if medical records are involved, those as well. The reason why the boards want to see our employment file is to see how much, or if you’ve had disciplinary action and corrective action, verbal coaching, counseling, anything like that. Usually, if there’s a complaint, most importantly, the board wants to see if you’ve had any other incidents or problems with that specific thing.

For instance, if the complaint is that the nurse falsified the record, maybe they forgot to take vitals or something, and then they just put them in. And then it’s shown that they just fudged the numbers, they weren’t in the room, and they took the vitals. They want to see, alright, was this nurse done that in the past? So, they will usually subpoena the employment file from not only your current employer but, I guess I should say that in reverse, they’ll subpoena the employment file from wherever this happened, but usually if a complaint is filed, you’ve been fired from that job, they’re also going to want to subpoena your current employment file as well. Just to see if once again, if anything is kind of reoccurred that’s like what the complaint is about.

After the board has all the documents back, sometimes subpoenas can take a very long time. I’m talking like six months to a year sometimes. I mean, at some point, the board will usually just abandon going for a subpoena if whoever is just completely non responsive. And then usually at that point, the nurse will come in for an interview with the investigator. An investigator with the board will be assigned to your case and they’ll be the one that’s kind of the point person, setting the subpoenas, talking to witnesses, talking to the complainant who filed the complaint, and then the nurse as well. The interview is the best opportunity for the nurse to provide context. I think, in my opinion, it’s probably beyond the board meeting is the most important step in the process. And so, having the nurse prepared to: one, anticipate the questions they’re going to ask, and then two, know how to answer the questions is important.

So, understanding once again, most people overshare, especially when they’re speaking, they just kind of ramble on. It’s once again, better to answer the question directly, stop, and then let the investigator follow up with more questions. Just talking for 10 minutes straight is not effective almost in any media. After the interview is completed, usually the investigator will then draft a report. Then they’ll go over that report with either peers or the director of whatever state board you’re in. And then they’ll generally recommend some options to the board, or some executive directors will have the power to either dismiss a case or give a non-disciplinary outcome. In most states, it’s called a letter of concern. If they think disciplinary action is necessary, or if they just want the board to look at it, at some point, the nurse will get placed on the agenda at the board meeting. Most states either meet monthly or every two months, and then they just review every single complaint. And then the nurse can have the opportunity to address the board. If they have an attorney, the attorney can address the board. The board can ask questions to the nurse. Then ultimately, they will literally vote right in front of the nurse. This is what we’re going to do. And then depending upon what the outcome of the board meeting was, the nurse always has appeal rights.

If they’re unhappy with what the outcome was, they can always just appeal and move forward to a hearing. In most states. it’s in front of what’s called administrative law judge. It’s a well, supposedly impartial kind of judge who’s outside of the board system. So, that’s kind of the process of what happens when a complaint is filed against a nurse with the state board. Once again, this is just a general kind of outline of what happens and what to expect.

How to Get Out of a Dental Associate Contract?
Scroll to top