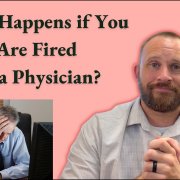 What happens if you are a physician and you’ve been fired? There are obviously ramifications that come with that. Probably not as bad as most people think, but the most important thing is maybe the reason behind the firing. Defining firing is certainly important. In any physician contract, there are two main ways that the contract can be terminated. Either with cause or without cause. In the case of cause termination, it just simply means one of the parties breached the contract and then the other party decided to exercise their rights to terminate the contract. Normally, immediately if a breach isn’t fixed. If there is breach of contract, let’s just take this from the employer’s perspective since this video is about what happens if a physician is fired.

Let’s say the physician is refusing to take a call and it was in the contract that they’d take one in five calls or something like that. Well, the employer would then send a letter to the physician stating, you’re in breach of contract. And then there’ll be cure period. A cure period simply means usually somewhere between 15 to 30 days, the physician can fix the breach and cure it. And then at that point, the employer would no longer be able to fire them for cause. Really, the only difference between for cause and without cause is that under for cause, they can usually just terminate the contract immediately without any notice. Whereas without cause termination, either party can terminate the agreement at any time, for any reason, with a certain amount of notice, and as I said before, usually 60 to 90 days.

Let’s say a physician was fired for cause. What do they have to think about? Well, one, depending upon where they are in the contract, if it’s like, maybe within the initial one or two years, there may be repayment obligation as far as the signing bonus, relocation assistance, credentialing fees, or licensing. Some of that money may be recouped by the employer. Now, if you are fired for cause, once again probably depends on what it is. Most of the time, none of that is reported to the medical board. The only real employment consideration if you are fired for cause is that when you try to find a new job, they’re certainly going to want to know what happened at your old job and if you were fired for cause, well, it’s probably going to have to talk about what led to that. Other blogs of interest include:

And it could cause some difficulty in finding a new position. However, I find physicians are in such high demand almost if a reason behind a termination didn’t involve peer review, clinical issue, or some major behavioral concern, it’s usually just a personality clash and most new employers aren’t honestly that concerned about that. Having to repay a signing bonus relocation assistance, or whatever, that’s one thing to think about when you’ve been terminated. Now, if you’ve been terminated without cause, that simply means that as I said before, either party can terminate it for any reason at any time with a certain amount of notice. The physician can do this as well. They can give notice to the employer and leave. I don’t think, in that case, you’re not firing the employer. I don’t really look at it as a physician getting fired if the employer uses without cause termination.

There are several reasons why an employer could terminate a physician without cause that are not negative at all. Maybe they’re just simply closing a location. Maybe they’re just bad either at business or marketing and the volume isn’t there to support another physician. Maybe they’ve sold the practice to a new organization and that organization is restructuring. Or also, if a new organization comes in, they almost always require that the physician sign a new agreement and if the physician is unhappy with the terms of the new agreement, then usually the contract will be terminated by the employer. So, just because the contract is terminated without cause doesn’t mean the physician necessarily did anything wrong. It just means that for whatever reasons, the employer no longer needs the physician. Now, maybe some of the negative things, maybe the physician didn’t breach the contract, but I guess probably the most likely situation would be if their physician is very low productivity, either they just see patients very slowly and they’re not even close to reaching the volume expectations of the employer.

That would be one reason that the employer would terminate them without cause, but they’re not in breach of contract, they’re just not meeting the expectations. I think when you are fired for cause, the biggest things to think about are one, it could happen immediately. So, the transition for patient care is something to keep in mind. Continuity of care obviously is important. And if you are in a specialty like psychiatrists or people with mental health issues, make certain there are bridge scripts so that they can find new providers.

That is something the physician wants to think about. Now, the patients are always the patients of the employer, even though they are the patients of the physician. So, if a physician is terminated for cause, they’re not necessarily responsible for the patients anymore. It’s the employer’s responsibility to take care of them although the continuity of care is important. And certainly if you want to avoid board complaints. Many times, board complaints are filed simply because the patient will say, oh, my doctor abandoned me or oh, they abruptly left. Many times, it’s not the physician’s fault at all. So, in summary, if you’ve been fired, think about what you may have to repay, and maybe do you have to pay tail insurance, think about the restrictive covenants that would apply, so the non-compete, the non-solicit, and then think about the continuity of care issues as well. Look, things happen in employment. Just because you’re terminated doesn’t mean you necessarily do anything wrong. This is just business, things happen.

Consequences of Breaking an Employment Contract

What Should be in a Dental Associate Termination Letter?
Scroll to top