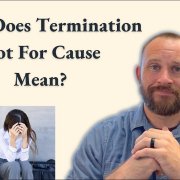 What is termination not for cause?  In an employment contract, it can be terminated in several ways, and probably the most common way for a contract to be terminated is not for cause. It’s also known as without cause for no good reason. I think without cause is probably the most used name. I’m just going to refer to no good causes without cause just to avoid any confusion. As far as terminating an agreement, an agreement can terminate in many ways. One, if it’s just a fixed term, let’s say it’s a one-year contract and there’s no language that it automatically renews, the one year is finished, and neither party decides to renew it, the contract is terminated, and that’s it.

A contract can be terminated with mutual agreement. Either party for whatever reason decides, you know what, this isn’t working out, let’s just go our separate ways. A contract can be terminated for cause. If there is breach of contract amongst the parties, there will be language in the contract that states, if this happens, then one of the other parties can terminate the contract immediately at their options. For instance, let’s say you’re a healthcare professional and you have to have a license in order to do what you’re doing. Let’s just say it’s a physician. This physician loses their medical license. Obviously, they can’t perform the terms of the contract. The employer can automatically terminate the agreement. Then the other way of terminating a contract is without cause for no good reason. In this case, what does that mean? Well, in almost every employment contract, it will state the contract can be terminated at any point, for any reason, with a certain amount of notice to the other party.

And this is the important part. Normally, in a contract, without cause will usually be somewhere between 30 to 90 days. Let’s say the professional wants to leave, maybe there are better job opportunity. Then they provide written notice that states, per the without cause termination section, I’m giving you the 90 days’ notice. And then the professional work out those 90 days. At the end of the 90 days, they can move on to their new job opportunity. Things to think about as far as without cause termination: one, if the contract states, you can only do it after a certain period, that’s a red flag! Some contracts will state you can only give without cause termination after the first year or after the initial term of the agreement. You don’t want to sign a contract that has that. Why? Other blogs of interest include:

Well, if you enter a contract, many times the employer kind of talks up the position and it doesn’t turn out to be what you were expecting. And if you have no way of terminating the contract without cause, you are stuck. So, you always want the ability to get out of the contract if it simply isn’t working out, maybe the volume isn’t there, you’re not making as much money as you like, maybe the hours are much different than they told you, or maybe your call responsibilities are much more than they told you to expect. I mean, there could be hundreds of reasons why someone isn’t happy in a job. But if you’re not able to get out of that job at any time, it is a problem. So, you need without cause termination, 30 to 90 days is reasonable.

Anything over that is not reasonable. Sometimes, I’ll see a contract that has 180 days or even sometimes a year without cause notice. You don’t want that for a couple of reasons. One, once you give notice that you’re leaving, relationships can change, and it can sometimes be awkward. Sometimes, it can be hostile. To shorten that period where it’s awkward is just better for the professional. So, you want a shorter without cause termination. And then there also needs to be language in the contract that states if the professional gives notice, but the employer decides, you know what, you’re leaving, just leave tomorrow. The professional should get paid for whatever the notice period was. If it was a 60-day without cause notice period, and then the employer says, we don’t want you to be here long term, we don’t want you here at all. The professional should get paid for those 60 days.

I mean, think of it the opposite way. The employer requires a 60-day notice so they can kind of make plans to transition, to replace you, or to whatever. They want the professional in that so they’re not losing out on profit for 60 days. Well, the same thing should go for the professional. If they’re required to give notice, they should get paid for that amount even if the employer doesn’t want them to continue working. So, yes you can terminate the contract without cause. It absolutely should be in every employment agreement. It is a huge red flag if there isn’t. I think, or at least, I find that if there is a contract without any ability to terminate the contract without cause, there’s usually a reason behind it. And it’s usually because the employer is either badly manage or bad at business or treats their employees badly. And they have had a continuous string of people leaving early. And so, they want to prevent that, but you absolutely do not want to get a situation like that.

How Long Are Most Dental Associate Contracts?

What Can You Negotiate in a Physician Contract?
Scroll to top