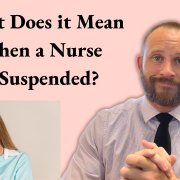 What does it mean when a nurse is suspended? There are several ways a nurse can be suspended. And then we’ll kind of talk about the repercussions of being suspended. The number of ways a nurse can be suspended is one, if they’re in a confidential monitoring program with their licensing board and they violate that agreement, there will usually be some language in there that states if they fail a drug test, maybe stop sending in quarterly reports, quit going to AA, or whatever the terms of the agreement are, if the nurse stops doing those, then there is a normal language that would just automatically trigger a suspension. Another way a nurse can be suspended is if the board feels they’re an imminent threat to the health, safety, and welfare of the public.

In that case, most states have a process that’s called a summary suspension. And in that at either a regularly scheduled board meeting or sometimes in an emergency board meeting, the board will essentially discuss whether the nurse’s conduct rises to the level that necessitates a suspension. They do afford the nurse, the opportunity to address the board, or maybe to discuss the issues that are leading to the possible suspension. But the summary suspension means something has happened that has triggered the staff of the board to think that a suspension is necessary. And then the other way that a nurse can be suspended is if they’re on probation like disciplinary probation. There’s a difference between being in a confidential monitoring program and being placed on disciplinary probation. Generally, the terms are similar. For instance, if there’s substance abuse issue, it’d be regular drug testing participation in AA, maybe a nurse recovery group, or some level of supervision at work.

And so, even if it’s like an alternative discipline program or formal probation, meaning the nurse went through the investigation, the board heard the matter and then decided to put them on formal disciplinary probation. In that case, the result is the same. On a consent agreement, they have to follow the terms. And if in this example, they do not follow the terms of the consent agreement, then they can either, or I guess depending upon the language of the agreement, it can either be automatically suspended. In that case, we call that a state suspension. That just means the board has already said that this is serious. Many times, if it’s just standard probation, and the nurse violates it, it just goes back to the board for review. Other blogs of interest include:

If it’s a state suspension, the language will state if the nurse violates the agreement, the state is lifted, and the nurse is suspended. That’s how it goes. Those are the three scenarios where a nurse can be suspended. Now, what does it mean if a nurse is suspended? They can’t practice. It’s that simple. They are no longer allowed to practice as an LPN, as an RN, as an NP, as a CRNA, or as a CNA, whatever it is, they cannot practice as a nurse until the case is resolved. In most states, what happens is once the license is suspended, then it’s forwarded to formal hearing, generally in front of what’s called an administrative law judge. Different states have different time periods, but normally, it’s somewhere between 30 to 60 days that a hearing has to be held. And then at that hearing, the nurse can present evidence to the judge.

And then the judge can either reject, accept, or modify the decision of the board, and then normally it gets kicked back to the board and they can do the same. The only way to, I guess no longer be suspended is either to go to the hearing and the judge recommends it’s not necessary, or they could reach agreement on a new consent agreement with the board’s attorney. Normally, if we have a nurse who has been on a consent agreement, violated it, gets their license suspended, we can then negotiate with the board’s attorney to try to come to an agreement on a new consent agreement that would have either the same terms or maybe something more punitive. There is also another kind of mechanism called stayed revocation. And that’s kind of the highest level of a consent agreement as far as being punitive. And in that case, if it’s called a stayed revocation, if the nurse violates the agreement, the stay is lifted, and their license is automatically revoked. One of the normal scenarios where they would basically not even give the nurse the opportunity would be if they had violated previous consent agreements, or maybe they’d been on probation multiple times, and they’d been disciplined throughout their nursing career.

It’s a tough option because you screw up and that’s it if it’s a stayed revocation. So, that’s what it means when a nurse is suspended. They can’t practice. They do have some appeal rights and administrative rights as far as going to a hearing. But if you’re suspended, it will likely end up in probationary document listing a bunch of things that you have to do.

Is There a Penalty for Early Termination of an Employment Contract?

Can an Employee Terminate a Contract at Any Time?
Scroll to top