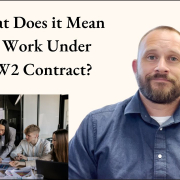 What does it mean to work under a W2 contract? So, there are two types of employment relationships for a professional. You are either working as an employee or you’re working as an independent contractor. And when you work as an employee, you are a W2 employee which means at the end of the year, the employer will send you a W2, which has a summary of all the compensation you received in the previous year, and then all the taxes that have been taken out of it for Social Security, Medicare, and that type of thing. If you’re an independent contractor, you’re considered a 1099 employee. And in that scenario, no taxes are taken out of any of your compensation.

You just paid the full amount, and then it’s your responsibility at the end of the year or if you’re paying quarterly to pay all the taxes to either the state or the federal government depending upon where you’re working. So, what are the advantages of one over the other? Well, if you are an employee, so if you are a W2, then you’ll receive benefits, whereas an independent contractor usually will not. And normal benefits for a professional are licensing dues and fees, health, vision, dental, retirement, disability, and paid time off, and they’ll probably pay for some continuing education. If you’re in healthcare and need malpractice insurance, they’ll pay for your underlying premium and tail insurance if necessary. Whereas as an independent contractor, for the most part, you’re not going to get any of those things.

Maybe if you’re a healthcare provider, they’ll pay for your underlying premium, but extremely unlikely they’re going to pay for tail if needed. And they’re not going to pay for any of the other things. They won’t pay for your licenses, your registrations, or any health, vision, dental, retirement, life, or disability. All of that will be the responsibility of the independent contractor. Now, if you have the choice of being an employee versus being an independent contractor, there are a few things you need to think about. One, if you’re working as an independent contractor, then you very likely should set up an LLC or a PLLC, it just depends upon what state you’re in. And then in that scenario, you’ll have a bank account under your business and a tax ID number, and then you can deduct all the expenses that are associated with your professional services.

Once again, if you’re a healthcare provider, then you could deduct your malpractice insurance, any supplies, maybe a rental space, travel, or any of that stuff associated with you. Well, if you’re working for the company, you are an independent contractor. Now, the benefits of a W2 are obviously the benefits. So, having healthcare, travel reimbursement, continuing education, support, so administrative support, many times you’re not going to get as an independent contractor. That’s what makes the W2 position, I guess, attractive. I also find, as an attorney who helps professionals, many independent contractors don’t budget for having to pay the taxes on what they’re paid throughout the year. And so, they’ll get to the end of the year, and they’ll owe a significant amount of money. And for some people, it’s a budgetary problem, whereas when you’re working as a W2 employee, all the taxes are taken out every time you get paid, and therefore, at the end of the year, theoretically you’re not going to owe anything back to the government.

Most likely health, vision, dental, retirement, life, disability, they’re going to pay for your board license, DEA registration, and continuing education, you’re going to get paid time off. All of that, in a normal employment relationship, would be covered by the employer. If you’re working as a 1099, you’re going to be responsible for all of that including malpractice insurance. Now, if you want to maximize your tax deductions, then what you should do is create an LLC, get an EIN, get a bank account in the state that you’re working in, and then put all compensation and expenses, have it flow through that bank account. That way, you can track whatever your expenses and revenues are. And then use that as tax deductions at the end of the year as business expenses.

Working as an Independent Contractor

And that way, the relationship is set up correctly. Now, as I said before, the situation really dictates which one is better. There are times when an employer will ask you to work as an independent contractor, but they’re really treating you as an employee completely. The reason why most of them would do that is just to save on paying employment taxes, which is usually around 10 to 12% of your total compensation. The IRS lists kind of like a 20-factor test to determine whether someone is an independent contractor versus an employee. I would suggest if you’re concerned that you’re being misclassified, that you look at that test, and then if it’s clear you’re actually an employee, but they’re just classifying using an independent contractor, so they don’t have to pay employment taxes or give you any benefits, bring that to the attention of the employer and say, look, I believe you’re misclassifying me.

I’m not comfortable signing this. I mean, what could happen is if the IRS determines that you were misclassified, they could come back to the employer for employment taxes. Sometimes employers will even put language in there stating that the independent contractor would be responsible if the IRS comes back and says they’re misclassified for those back taxes and penalties. Absolutely do not sign something that says that. So, that’s kind of the different scenarios where it might make sense to be a W2 versus a 1099. It just depends upon the situation. I mean, most people, if they’re just working sporadically, maybe once or twice a month for a surgeon or something they’re assisting in like if you’re orthopedics or something like that, that makes sense to be an independent contractor. If you’re working every single day from nine to five, you are not an independent contractor. It’s very, very unlikely that a scenario like that would dictate you to be classified as an independent contractor. So, you just need to be careful.

What is a Full Time Contract Position?

Is it Worth it to Take a 6 Month Contract Position or Wait for a Full Time ...
Scroll to top