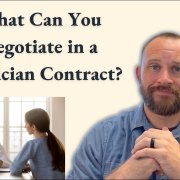 What can a physician negotiate in an employment contract? The short answer is everything. It ultimately depends upon the willingness of the employer of whether they’re willing to negotiate terms or not. I find big hospital networks are less likely to make major changes in an employment agreement. Whereas if a physician is looking into a physician with a smaller physician-owned practice, there’s much more leeway for major changes. What are the things that are important to the physician and then what are the things they can get changed? In my mind, when I’m talking to a physician, I think the things that stick out as most important would be signing bonus, relocation assistance, how to terminate the agreement, making certain there’s without cause termination that’s a reasonable length, compensation, productivity bonuses and then the non-compete oh, and then tail insurance as well, who pays for tail insurance if it’s claims made policy.

Let’s go through each one of those and come up with some tips on how to negotiate. First, as far as compensation goes, the physician needs to know the value and what their specialty’s value is. Getting the MGMA data is helpful, talking to colleagues about what they’re being offered or what they’re currently making in different organizations is helpful. Sometimes, the associations for each specialty can provide information as far as what’s a normal salary in your specialty. That’s one way to look at it. As far as productivity goes, this is a little more difficult. It’s going to be completely based upon, I guess, the arrangement. Is it kind of a hybrid of a base salary and RVU production? Is it a base salary and net collections? Is it all RVU? Is it all net collections?

This one is dependent upon what’s the type of structure. If it’s net collections, if it’s a hybrid model, meaning you’re getting a base plus a certain amount. Let’s say for instance, the expectation was 20,000. Anything collected over 20,000 by the practice, the physician will then get 15 to 25% of that. That would be a normal percentage. If the physician is purely on net collections, somewhere between 40 to 45% is standard. As far as RVUs go, two things, you can negotiate: the threshold, meaning, how many RVUs you must generate to get a certain amount, and then the compensation factor, which is the monetary value associated with the RVUs. That has some leeway as well. As far as signing bonuses and relocation assistance, the main things are the actual number, obviously, but then more importantly, what’s the repayment schedule. Other blogs of interest include:

Almost every contract is going to have forgiveness period, meaning, let’s say the physician gets a $20,000 signing bonus, and the initial term of the agreement is two years, then usually, they’ll have to stay for that two-year initial term to have the entire 20,000 amount forgiven so they don’t have to pay anything back. The same goes for the relocation assistance. Relocation assistance should be somewhere between 10,000 to 15,000. The signing bonus can vary widely from 10 all the way up to 75. That one is specialty dependent. As far as non-compete goes, this does vary state by state on what’s considered reasonable. There are a few states where it’s completely unenforceable, California and Mexico for instance. Normally, the non-compete shouldn’t be any longer than a year and the geographic restrictions should be somewhere between 5 to 15 miles from your primary practice location. Where to negotiate with this?

Obviously, the length, you want to keep it one year or shorter. You want the non-compete to only apply to a few locations. There are employers who will say the non-compete attaches to every facility we own in the entire city. Instead of having one office within 10 miles, you could have 30. So, that’s very important. And then specialty as well. Some specialties can do multiple things. Let’s say you are internal medicine. You can be a hospitalist, you can go to family practice, you can do urgent care. If the non-compete states, you can’t practice medicine within that geographic restriction, well then, you’re out of luck. Whereas if you just keep it to the specialty of what you’re providing to that employer, specifically, in this case, let’s say your hospitalist, then you could go in family practice or do urgent care for a year, and then when the non-compete ends, go back to being a hospitalist. That’s something to think about.

And then malpractice insurance certainly is always kind of a big discussion with my physicians that I’m working with. One, you need to identify if it is a claims-made or an occurrence-based policy? If it’s a big hospital, they might be self-insured. And then after you determine what type it is, if it is a claims-made policy, then tail insurance will need to be purchased after the contract terminates. And then who pays for that? Most of the time, if you’re in a small private physician-owned practice, the physician must pay for tail when they leave. If you’re with a big hospital network, you almost never have to pay for tail. Now, tail insurance usually costs about twice what your annual premium is.

Let’s just say your family practice, your malpractice annual premium is somewhere between $6,000 to $8,000. If you had to pay for tail, it’s somewhere between 12,000 to 16,000. That’s one thing that you can negotiate, who pays for tail. Sometimes an employer will put, if you’ve been with us for one year, we’ll pay for a quarter and then two years, half, and then three years, 75%. There are some ways of getting out of having to pay the entire amount, just kind of dependent upon the situation. Now, the first thing that I talked about was is the employer willing to negotiate or not? There will be some employers that simply say, this is a take-it or leave-it deal. I don’t think those employers are going to be great to work with moving forward. If an employer is not willing to budge on anything, they likely will be difficult to work with going forward.

Meaning, they’re not going to accommodate the physician in some way. So, I caution any physician who has been given a job offer, we ask for some clarification or some certain concessions and they just simply say, not. This is it. That’s usually a red flag. And I tell the physician, you may want to continue looking for a job because this might not be a good fit for you. Anything in the contract is negotiable. You need to figure out what’s most important to you. Sometimes, the non-compete is absolutely the number one thing. For others, it’s the compensation. For others, it’s not having to pay tail. It really is dependent upon the physician’s wants and needs and then tailoring the negotiations to get them to that point.

What Does Termination Not For Cause Mean?