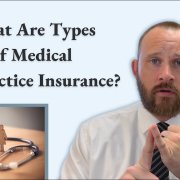 What are the different types of medical malpractice insurance?  This is a frequent topic that comes up when I’m reviewing a contract. I would say, during med school or training, most physicians are not given a breakdown of the different types of malpractice insurance. So, it’s always a good idea when I’m talking to a physician who is relatively new and doesn’t understand the difference. Just to kind of give a brief breakdown of each one and maybe the pros and cons of each. There are three main types of professional liability insurance for physicians. You have self-insurance programs from big hospital networks, and then most private practices will utilize one of two, either occurrence-based coverage or claims-made insurance.

Let’s just kind of talk about three of them. First, self-insurance. Large hospital networks will usually have their own policy in the simplest way: they’ll set aside a pot of money, pay claims out of that. In that circumstance, generally, the physician doesn’t have to worry about purchasing tail insurance. That’ll be covered by the employer’s self-insurance program. This is great. I mean, it’s great insurance when a physician never has to worry about tail and doesn’t have to worry about paying for the underlying premium, that is kind of a nice, secure feeling. That’s what most large hospital networks utilize. The next type is occurrence-based coverage. And what that means is a policy has to be in effect when the event actually occurs.

Any kind of malpractice event is going to occur while you’re employed with the employer. So, you are covered in perpetuity if an occurrence-based policy is in place and then something happens. The benefit of occurrence-based insurance is that you don’t need to purchase tail insurance. The downside is it costs more than a claims-made policy. A good rule of thumb is that occurrence is about a third more expensive than claims-made policies annual your premium. So just to give an example, let’s say you have a claims-made policy and it’s 6,000, then your occurrence-based coverage would be around 8,000 per year. There is a math equation that needs to be considered to determine what is the best policy for a physician. And I’ll get into that at the end. But honestly, most of the time, physicians don’t have a choice between an occurrence-based policy or a claims made policy. It’s whatever the employer chooses to provide. Other blogs of interest include:

That’s what the physician must go for. The last one is claims made. What that means is a policy must be in effect when the claim is made. When someone terminates a contract and they no longer work for the employer, there is still a gap in between their last day of practice with that employer and the last day somebody can sue. That’s called the statute of limitations for malpractice claims. In most states, it’s two years. If there is no policy in effect if a claim is made, then the physician is in trouble. Nearly every employer will require one of the parties to purchase tail insurance. Tail insurance simply covers that gap in between the last day that a physician works for the employer and then the last day somebody can sue them.

Now, it’s two years from when the patient either knows or should have known of a malpractice incident. It’s possible that it can go past two years if there was no way for the patient to know until a few years down the line. I’d say most of the time, if a physician is working for a private practice, small physician-owned group, or something like that, they’re going to have to be the one that purchases the tail policy. There are employers that will pay for it, but I’d say more times than not, the physician is responsible for their own tail. Tail costs about two times what the annual is. So, if a physician has a $10,000 annual premium, you just multiply that times two, and then that’s about how much they’ll have to pay for tail insurance.

It’s a one-time cost, so you don’t have to pay it every single year until the statute of limitations runs. It’s just a one-time cost. As soon as you finish the employer and then you’re covered for that amount. Now, there can be different lengths as far as the tail policy goes, but most of the time the tail policy will simply cover a reasonable amount of time until the statute of limitations is over. Somewhere two to five years. As I mentioned before, as far as the math equation, if a physician does have their choice of either occurrence or claims made, then you need to think about how long you’re going to be with the employer.

If you’re paying a third more for occurrence coverage per year, but you don’t have to pay tail, then it might make sense to utilize that if you’re going to be there on maybe a short-term basis. Let’s say you’re there for two years, you’re going to pay a third more for two years, but then you don’t have this big one-time cost at the end. If you’re in a claims made policy and you’re going to be somewhere long term, then it might make sense to use claims made. Therefore, your annual premium is cheaper, but then you’ll still have that hit on the end with the tail coverage. Which one is better? It honestly just depends upon the situation. And then certainly, it depends upon specialty.

The annual premium can vary wildly. Like primary care, peds or something that could be 6,000 a year whereas OB-GYN, one of the higher-level surgeons, cardiac surgeon, or something like that, could be between 20,000 to 50,000 a year, and then just do the math on that tail cost. It could be forty to a hundred thousand for their tail. It’s specialty dependent as well. This certainly is something that we negotiate. When we’re looking at a physician contract, you always must consider, okay, what’s most important to the physician. And then what are the areas that we can work on more comp, more time off, better bonuses, whatever. But who pays for talent insurance certainly is an important piece for most physicians, especially the ones in those higher-end specialties?

Can a Physician Solicit Patients after a Contract Ends?

Can you Terminate a Physician Contract Without Notice?
Scroll to top