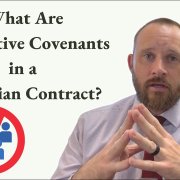 I would ask them if it just says, you can’t say anything bad about them, then I would ask them to make it mutual, meaning, it just takes the same paragraph and reverses the parties so that they can’t badmouth you after the contract ends as well. Next, is the non-compete. This one is easily the most important in the physician contract. A non-competition clause will state that you can’t work within a specific specialty for a period within a defined geographic region. Let’s just take a cardiologist as an example. The non-compete will state, you can’t work in cardiology for one year after the contract terminates within 15 miles of the primary practice location. The important parts of any kind of non-compete are one, the definition of the specialty. Some people are boarded in multiple specialties and can do different things like a hospitalist. If you’re in internal medicine, you can do hospitalists, you can do ED, you can also do urgent care. And you need to limit the definition of the specialty to what you are doing for that employer.

If you are, as I said before, working for a hospitalist for a hospital, then you want to have the opportunity to do maybe primary care, ED, or urgent care for that year. And then you can switch back to being hospitalists in that area if you want to. That’s the first part. Now, how long should it be? Well, most are somewhere between one to two years. In most states one year is considered the enforceable amount. If you do have a two-year non-compete, you would ask to limit that to one year. One year is fair. I don’t think any state is going to find that a one-year non-compete isn’t fair unless it is a state that completely finds any kind of non-compete unenforceable. There are a few states like that, but obviously, we’re talking about states where it can be enforced. Other blogs of interest include:

If you have a longer than one-year non-compete, you want to cut that down to one year. And then the most important part of a non-compete is the definition of where you can’t practice. Kind of the simplest way would just be you can’t compete, or you can’t have a job within 10 miles of the primary location that you work in. That’s simple, right? Like you can’t work within 10 miles and it’s as the crow flies. There it’s not a street 10 miles, it’s just sticking a pin 10 miles all the way around. Now, if an employer has multiple locations or potentially if the physician is working, maybe not only in an outpatient clinic, but they’re working in a hospital or multiple hospitals, you need to be careful about what the definition of the restricted sites will be. Is it just your primary site?

Is it every site that the physician owns? Is it just the sites that you worked at? You want to limit that as much as possible as well. I mean, one trick is just to say, if they have multiple locations just to say, anywhere where I’ve generated more than 35% of my charges, that way it can only be two locations when you do the math on that one. That’s where the fight matters. If you’re with an enormous employer that has 20 locations in the city, and they’re saying it’s 10 miles from 20 locations, I can’t imagine any court would find that reasonable or enforceable. However, you never want to sign an agreement that you’re just expecting to break or not be enforced. That’s just a bad idea. So, those are the three kinds of main restrictive covenants.  The non-disparagement clause, non-solicitation agreement, and non-compete. We need to go over the non-solicitation clause

That means, for a period, you can’t actively solicit patients, employees, independent contractors, vendors. And so, the important part of that is what is considered soliciting. Let’s just take the patient part. Actively soliciting a patient would be downloading a patient list of all your patients with the employer, and then blasting out an email to them and saying, hey, I’m leaving the practice. I’m opening my own practice. Please come with me. That would be prohibited under a non-solicitation clause. Now, if the patient reaches out to the physician and says, hey, I hear you’re leaving, where are you going? That’s not an active solicitation. So, that would be okay. As far as soliciting employees, let’s say you’re opening up your own practice outside of the non-compete area, but you’re interested in bringing over the front office, an MA, a nurse or office manager, well, a non-solicitation clause would prohibit you from actively soliciting that person to come with you.

Can you Pull out of a Signed Physician Contract?
Scroll to top