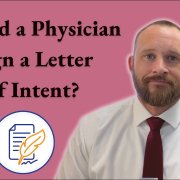 Should a physician sign a letter of intent? A letter of intent is also known as an offer letter. Different employers use a different name for it, but effectively it’s the same thing. Let’s go through the process and then once it gets to the offer letter/letter of intent stage, whether the physician should sign it or not. When a physician is looking for a new job or potentially if an employer reaches out to a physician, they can either do it through word of mouth from other physicians. If it’s a hospital or healthcare network, most of them employ physician recruiters who then actively search for candidates for open physician positions, or there are also independent physician recruiters who are brokers.

Doctors as a Candidate for a New Job

They will find candidates for open positions, they’ll bring those candidates to an employer, and then they’ll get fee, either a flat fee or sometimes a percentage of what the first-year compensation for the physician is. In this case, let’s say a physician has an interest in a job. There’ll be an initial discussion with the recruiter or usually the owner of the practice or a director or something just to get an initial feel for whether the physician will be interested or not. And then if that goes well, then it’ll likely end up in some site visit. The physician will travel to wherever the location is, they’ll meet with other physicians, meet with the administration, other facilities, and probably talk about some basic structure of the employment. At that point, if the employer is still interested, one step would be the employer would offer and say, hey, we would like you to sign this offer letter or letter of intent before we move forward with providing you an employment contract.

They do this for a couple of reasons. One, it does take some time to prepare a contract and so most smart physicians and certainly, any big healthcare network or hospital, have their own legal counsel. It takes a little bit of time to draft an employment contract specifically for a physician. Most places don’t want to go through the time and cost of paying an attorney to draft those contracts unless they have at least some kind of commitment from the physician. And that commitment is then effectuated through signing the letter of intent. Now, should a physician sign a letter of intent? If the employer is going to require a signed letter of intent before moving forward with an employment contract, then the answer is yes. If the physician is interested in a job and the employer is requiring them to sign an offer letter, then sign the offer letter. Other blogs of interest include:

The next question for most physicians is okay, well, if I sign the offer letter or letter of intent, am I bound to this employer? Can I back out or is it a binding contract? Well, in short, no, you can back out. The terms of the offer letter are very basic. Compensation, length of the contract, some benefits, maybe getting into the restrictive covenants, the non-compete, the non-solicit, basic signing bonus, relocation assistance, compensation productivity. That would be a lot for an offer letter, but those are the basic terms in it, however, once an offer letter is signed and then an employment agreement is reviewed by a physician, some of the terms can change or the basic information in the offer letter can completely change when provided more context in the employment agreement.

If it gets to the point where the physician has signed the letter of intent and they think, and they review the employment agreement and they say, you know what, this isn’t for me, this is substantially different. I don’t want to go through with it. Then don’t go through with it, don’t sign the employment agreement. Cordially, let the employer know, these are substantially different or not what I was expecting. And I’m not going to go through with the contract. In that case, you just wash your hands in the situation to move on. There is almost no scenario that I’ve seen where an offer letter would be binding or enforceable in any way. I mean, I guess if there was language in there that states there would be penalty for backing out the offer letter, sometimes they would want to recoup the costs of employing a physician recruiter, the travel costs of bringing the physician out, to do a site visit.

That’s very rare. For the most part, these are just cursory documents. You’ve come to terms on the big stuff, and then the details are in the employment agreement. I would say it is fine to sign an offer letter or a letter of intent from a physician if they’re really interested in moving forward with the job. A scenario where they absolutely should not, is if they’re just fishing for different offers and they say you know what, I’m just going to sign multiple letters of intent, and then once I review the agreements, I’ll decide. If you sign a letter of intent and then back out, you have burned a bridge. That’s just the reality of the situation. It is very unlikely you will ever have a chance of getting a job with that employer again.

And it frustrates any employer when they’re expecting a physician to come, they’ve stopped recruiting the activities, and then the physician comes back and says, you know what? I’m not interested in this. Therefore, most employers will put deadlines, this is the deadline to sign the letter of intent. And then once the physician is given the employment agreement, this is the deadline where we want you to either negotiate or sign the agreement. If you don’t do it, then we’re basically re-sending the offer moving on. So, it’s fine to sign the offer letter if you are truly interested in a job, if you’re not certain, I would not sign it. But it is not a binding document, and you can move forward and not worry that you’re stuck with the job that you’re not happy with or the terms of a job that you’re not happy with.

How Are Physicians Compensated?