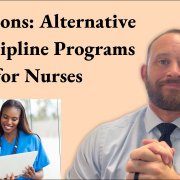 What are the pros and cons of an alternative to discipline program for nurses? First, I’m talking generally here, I’m not talking about one specific board. I’m kind of giving general pros and cons of the concept of entering an alternative discipline program, but this is not going to be state-specific. What is an alternative to discipline program? Well, every board offers confidential program that will deal with either substance abuse issues, mental health issues, or sometimes physical issues as well. But for the most part, I’d say of the clients I represented, the vast majority are in the program for substance abuse issues. Usually, it’s either alcohol abuse or opiate addiction. How does the process work?

It can start in several ways. If a nurse can self-report substance abuse problem, the board will generally offer them the alternative to discipline. It has different names in every state, but I’d say most states consider it as an alternative to discipline program. Let’s just say, a nurse says, you know what? I have an alcohol problem. It’s starting to affect my life. They would let the board know. And the reason why these boards offer these confidential programs is they don’t want to punish nurses who have issues that are voluntarily coming forward, asking for help, saying they have a problem. This is a way for the nurse to avoid formal disciplinary action. Let’s say a nurse gets caught diverting narcotics at work.

Then many of the boards will have criteria of how to enter the alternative discipline program or not. Let’s just say that that nurse, even though was diverting, still met the criteria. Then, the benefit of getting into the program is that they won’t be placed on disciplinary probation. It won’t be reported to nurses. You won’t have to report it in the future to employers that you are in the program. If I think that it’s like a slam dunk that the nurse is going to be put on disciplinary probation, then getting them into the ATD program just makes a ton of sense. We want to avoid permanent discipline. Most states don’t have mechanisms to remove disciplinary action once it happens. Other blogs of interest include:

And nurses have strict criteria for getting something removed. I know here in Arizona that we can’t get it removed. When it’s on there, it’s on there for good. So, it’s frustrating for the nurse that something happens, they have a career, and 20 years ago still must be reported and verified. The benefit of the alternative discipline program is that they can avoid any kind of formal discipline. It won’t follow them. And then, once they get through the program, usually it’s somewhere between one to three years, then they’re free and clear to continue working without any requirements. Now the downsides of ATD. Many of them will have a period where the nurse cannot pass any kind of medication. That is a problem, obviously. Anyone who works at a hospital, it’ll make their job nearly impossible.

That’s a problem. Two, many of them will require a short suspension while the nurse gets an evaluation and maybe must go into rehab or an intensive outpatient treatment program, something like that. The nurse must stop working for that period. And for many nurses, that’s not an option either. Kind of the difference between the ATD option for that is most disciplinary probation options don’t include any kind of narcotic restriction or even a short-term period where they have to wait before they can start practicing again. Those are two reasons why it may affect someone’s decision. Three, just the number of things they must do. At least here in Arizona, they’re usually similar. So, it’ll include random drug screens, participation in AA or NA, and probably a nurse recovery group.

There’ll be a level of supervision at work. So, either direct supervision or onsite supervision. Generally, multi-state privileges are taken away while they’re on probation in the county state, so there are some strict things that must be followed, but really, they’re going to have to be followed either way: either through ATD or the disciplinary probation route. What are some reasons we would not enter ATD? Well, one, if the nurse doesn’t have a problem, then we will usually decline the option. And then, I don’t know if rolling the dice is the right way of saying it, but we’ll plan on avoiding probation at the board meeting level. So, we would decline ATD at the beginning. Another reason is if the nurse just simply is unwilling to fulfill the requirements of the ATD, there’s usually no negotiation with this alternative to discipline programs.

As the attorney, we have options to negotiate terms of a probationary consent agreement, but we don’t have, I mean, they’re just unwilling to make a lot of changes to the alternative to discipline agreement. So, it’s a kind of a take-it or leave-it offer for the nurse. Whereas some of them just can’t accept the terms of what the ATD is. They need some changes made, like some of those changes could be, if nights are prohibited, they must work nights. Or maybe they can’t make three AA meetings a week. They can only do one because they have kids or family or something like that. The small changes can be made, whereas, with ATD, it’s simply if you want in the program, I mean, they consider it a privilege, right? So, it’s more of, this is what you need to do to be in this program

If you don’t want to do these things we’re asking of you, fine. Then go the probationary disciplinary route. I guess it has to match the needs of the nurse of whether ATD makes sense or not. For the most part, I find avoiding permanent disciplinary action on your record is paramount to almost any decision. It can affect future employment for the rest of a nurse’s career. Now, the longer amount of time that goes by between when they were on probation and continuing on, if you have a long stretch of time where there have been no issues, certainly the employer takes that into account, but it just makes things harder. Anyway, those are my kind of pros and cons of ATD.