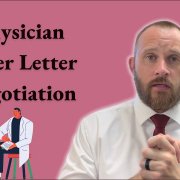 Physician offer letter negotiation, how to negotiate prior to receiving or after receiving an offer letter, and then the difference between an offer letter and an employment agreement. In any kind of job search, at some point, the organization may state to the physician that before we provide you with an employment agreement, we want you to sign the offer letter. The offer letter dictates the very general terms: compensation, term length, how to terminate the agreement, signing bonuses, relocation assistance, maybe some productivity compensation, and restrictive covenants, like the non-compete non-solicit. Basic things are listed in the offer letter and normally, in advance, whoever is doing the recruiting. It could be a physician recruiter for the organization.

It could be an outside physician recruiter who is more like a broker in between the employer and employee, if it’s a small physician-owned practice, it could be the owner of the practice discussing the terms with the physician who’s interested in the job. I find that most private smaller physician-owned groups do not provide offer letters whereas, in most larger healthcare networks, hospitals, especially in academia, there’s almost always an offer letter of some sort that’s provided to the physician. You can certainly go back and forth on the general terms prior to receiving the offer letter. Normally, they’re going to give you those terms with the first offer letter. So, you’re going to see for the first time, alright, this is the comp, this is the benefits.

This is the term, et cetera. If a physician is unhappy with the terms that are listed in the offer letter, then this is the time to at least negotiate those terms. As someone who reviews these every day, it’s very difficult for me to give someone advice just straight off an offer letter. There are specifics in minutia contained in the employment agreement that can drastically alter whether an offer is good or not. The terms of a non-compete, meaning how long it lasts, the radius in the restricted territory, what specialties that it includes for, let’s say someone is in family medicine, they can also be a hospitalist, they can do urgent care. Does it stop them from doing all those things or just one of them? It just depends. And those little details are not listed in the offer letter. Other blogs of interest include:

And seeing, okay, the comp is good, the benefits look good, the term looks good, all that looks good. And then once you see the actual employment agreement, it’s like, whoa, this is a deal-breaker as far as I’m concerned. So, how to negotiate terms when you just received the offer letter in my opinion is difficult. First, you need to figure out, okay, what is a base salary amount if it’s just a straight base that I’m happy with. A couple of places you can go, Google MGMA compensation data. You can usually find some couple of years old data online. It’s easily accessible. Ask colleagues. If you’re in training, ask other residents or fellows in your program. If you have friends that are already out, ask them, how much are you making? What are the other offers that some of your friends are getting as well.

How to Negotiate a Letter

That’s really the best type of information I can find. Yes, salaries do vary based upon where you are in the country. However, just the straight-based salary should not be the determining factor for a physician, especially when out of training. The environment, the ability to learn new procedures, having a positive mentor. Having some growth opportunities in the first job is very important. I find that it’s helpful if the physician puts a list together, these are the most important things to me, and then they need to go over it with the employer prior to signing the offer letter. And if you can come to agreement on terms, then that’s the point where you’d sign the offer letter. Then the employer would then draft the employment agreement and give that to the physician.

Now, there are times when a physician will sign the offer letter, and then after reviewing the agreement, decide, this is not the job for me. The offer letter is not binding unless there’s language involved that states there are some damages associated with not following through. I’ve never seen that before. Even if a physician has signed an offer letter after reviewing the employment agreement and they’re unhappy with what’s in there, they don’t have to go through with it. They can just simply say, this is not what I was expecting. Either we can negotiate the terms of the employment agreement and the language in it, or I’m just going to move on somewhere else.  So, those are some tips on how to negotiate a physician offer letter, and then the differences between that and an employment agreement.

What is a Letter of Intent for Physicians

What’s the difference between an offer letter and an actual employment contract and then, is the offer letter binding? Some employers will ask that the physician sign an offer letter and the offer letter dictates basic terms of the agreement. Generally, salary, any other kind of compensation, signing bonuses, relocation assistance, maybe getting into the benefits of PTO, what they’ll pay for as far as dues and fees, maybe what the basic terms of the non-compete are, very base level things like your PTO will be 30 days or your base compensation in year one will be $300,000. Many physicians don’t want to go through the hassle or expense of drafting an employment agreement if they can’t at least come to terms on the basic level of what will be in the employment agreement itself.

If the offer letter says it’s one year and five miles, then when you get into the agreement, when you get into the details, it’s one year, but then it’s five miles from every single facility that a healthcare network owns. One location for five miles is usually reasonable. 100 locations for five miles obviously is not. And that itself could be, for a physician, an absolute no, I’m not signing this agreement. It has this. Or maybe if someone’s on a net collection-based compensation structure for a contract and in the offer letter it says, you’ll get 40% of all net collections, but then in the actual agreement, it’ll say, when the contract terminates, you won’t get any collections after that. The physician in that scenario would be essentially working for free for the last three months because they wouldn’t get anything that they produced and collected after the contract ends.

And that can be an absolute no, I’m not signing this. So, in short, no, the offer letter is not binding. Things can absolutely change from the offer letter into the details of the actual employment agreement. And it is well within the rights of the physician, after reviewing the details of the employment agreement to tell the employer, I’m not going through or at least negotiating some changes to make it palatable to them and saying, although I signed the offer letter, I understand that, but I’m not signing this agreement. And there’s not much the employer can do about that.

Breaking Away from a Physician Employment Contract Negotiation

How should a physician turn down a job offer? There’s no sneaky legal or technical way to do this but there’s a right way and a wrong way to do it. And the last thing that a physician wants to do, or at least they shouldn’t do is burn bridges. There’s a professional way to turn down a job offer. And then there’s an unprofessional way to do it as well. Let’s first talk about how a physician is provided with a job offer and then maybe a short difference between an offer letter, letter of intent, and then the actual employment agreement. The process when a physician is finding a job either the physician will reach out to the practice knowing that they have an opening, or a recruiter can reach out to the physician.

And then most likely, they won’t even go through basic things like salary, benefits, compensation structure. There may be a mention of ‘this is the range’ but before they get into the details, what will likely happen is there’ll be a couple of calls with multiple people. If goes well, the physician will then have an onsite visit where they’ll meet everyone involved. Maybe I wouldn’t consider it interviews, but more of a get to know you. You may go to dinner, you’ll kind of tour the facilities and see what they have to offer. After those things have concluded, so they’ve had the calls, they’ve done a site visit. Then if the organization wants to extend an offer, they’ll usually do it verbally. I would say almost always with the big hospitals, they’ll always provide an offer letter first.

The offer letter will then go over the basics of what’s in the contract. How much will the physician be paid? What are some of the benefits? How long will the contract last? Maybe some of the restrictive covenants like the non-compete and non-solicit. What are bonuses? There could be a signing bonus, relocation assistance, maybe how much they provide for continuing medical education on an annual basis. The offer letter just goes through the quick and dirty details of what the employment terms will be like. At this point, the physician has the decision to make. Some places will not provide an employment agreement until the physician has signed the offer letter and then essentially committed to the job. Now, signing the offer letter is not a binding decision.

Many times, the terms in the offer letter will either change slightly once the employment agreement is given, or there will be terms in the employment agreement that make a job that looks great at the beginning, most likely a terrible decision. What are some things that make an offer letter okay and an employment agreement terrible? Well, the details of the non-compete, how long it lasts, what’s the restriction, is it all practice of medicine or just the specialty of the physician? Many physicians can do multiple things. For instance, someone in family practice or internal medicine could do hospitalist, urgent care, and family practice. What are the specific terms of the non-compete? How does the compensation change over time? Obviously, the employer will pay for the underlying medical malpractice insurance, but if it’s a claims-made policy, who pays for the tail insurance usually that’s not in the offer letter.

Are No Moonlighting Clauses Enforceable for a Physician?
Scroll to top