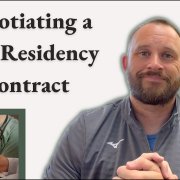 Negotiating a post-residency contract. This is the first actual employment contract as a practicing physician is going to sign. Most residents are not provided with a lot of guidance as far as what should or shouldn’t be in an employment agreement. And I think probably most of my contract reviews are with people coming out of residency or fellowship simply because they’ve never been provided guidance on what they need to know as far as an employment contract goes. Usually, when I speak to them, it’s kind of a broad overview of, alright, these are all the things that you need to look for in the future.

Then this is what you need to look for in your current contract. Let’s just kind of break down the job process and then where the negotiation comes in. For the most part, most residents are going to start looking for jobs sometime in the early part of their PGY-3 year. And some do it earlier, I guess, dependent upon specialty. But what will happen is, they’ll either have a physician recruiter reach out to them, or maybe they have colleagues that will suggest certain jobs, or if they’re looking in a specific location, they can seek out jobs in whatever city they’re choosing, and then there’s a communication between the employer and the physician. And then it’ll go one of two ways: either the employer will offer a letter of intent or an offer letter.

And then, that will spell out the basic terms of the agreement. Now, at this stage, most physicians are uncertain what to do. An offer letter is not binding. However, the terms that are reached when you sign an offer letter are then incorporated into the employment agreement, which will be binding when you sign it. For the most part, the general terms of the offer letter need to be negotiated in advance of getting the employment agreement because if you sign the offer letter and then after the fact, you try to make a lot of changes to the terms you’ve already agreed upon, the employer is not going to appreciate that. Now, there are plenty of times where even if we read each solid term on an offer letter, once you get the actual agreement taken into full context, maybe that job is just simply not a viable option. Other blogs of interest include:

Maybe the non-compete wasn’t listed in the offer letter. And then when you read it in the employment agreement, it’s terrible, or it will absolutely force the physician to move out of whatever city they’ve chosen to be in. And that can be a deal-breaker for some. Or maybe there’s bonus repayment obligations, either a signing bonus, relocation bonus, or student loan repayment. Usually, that’s tied to the initial term of the agreement, normally, two to three years. If the physician was to leave early, they’d have to pay back that amount of the bonus. Kind of depending upon what the payback terms of that are, that could be a deal-breaker for some physicians as well. If the job just gives you the employment agreement, I find it’s much easier to negotiate in that scenario, because there’s been no preconceived terms or agreements from an offer letter.

When you have the full context of the agreement, you can really determine what’s most important to the physician. Every contract is different and then every term is given different importance by different physicians. Some people may be moving to a city for family purposes, their family is there, they have roots in the community, and they must be there. Well, if there’s a non-compete that effectively boots them out of that area for a year or two, that could just be a, no, this is not viable for me or my family. Others could be compensated and maybe it’s all net collections, all RVUs, or hybrid model that just simply makes it not as lucrative as most of the jobs that the physician is getting, or maybe they’re in a specialty where tail insurance is extremely important.

You only need tail insurance if it’s a claims-made policy. And so, maybe OB-GYN or some of the other surgical specialties can have very high annual premiums, which means they’ll also have a very high tail insurance rate. And if the employer is making the employee pay for their own tail insurance, that can be a deal-breaker as well. I find the best way for a physician to figure out what’s fair for them is one, ask your colleagues how much they’re being offered and where, if you can get access to the MGMA data, that certainly is helpful as well. And then, you need to talk to somebody who understands these contracts and has some knowledge of, alright, well, this is the industry standard like how much does the average physician get in continuing education?

Does the employer always pay for their association, societies, med license, DEA, registration? What are the normal benefits? How much time off should they get? These are all important things that no physician is just going to know coming out of residency. And so, it’s important to talk to somebody who does know those things. Negotiation can always be tough for a resident if you’re in a specialty that’s plentiful and maybe in a city that’s very desirable. You simply won’t have much negotiating power if you’re in a specialty that requires a patient base that needs to be built up over time. Usually, it takes 12 to 18 months for a practice to reach maturity. And in that scenario, when you’re coming in with no established patients and it’s going build up over time, you’re just simply not as valuable in the first year or two, because you don’t have the patients.

You’re not going to generate the collections or have the encounters necessary. In that scenario, compensation might not be something that you’re going to have a lot of luck in negotiating, but maybe some of the other ancillary things you would, like the bonuses, the non-compete, and tail insurance as well. So, that’s a primer on negotiating for residents their first post-residency contract.

How Should a Resident Physician Look for a Job?

What is an Evergreen Physician Contract?
Scroll to top