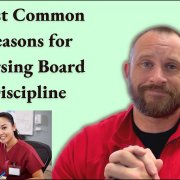 What is the most common reason or reasons for a nurse to get disciplined by a board of nursing? In my mind, all discipline stems from two categories: clinical and behavioral. Let’s kind of break down each one. As far as getting in trouble for a clinical incident, obviously, any kind of deviation from the standard of care, practicing outside of scope, missed medication, documentation errors, and patient abuse. I would say those are probably the five most common ways for someone to get in trouble clinically. One thing to keep in mind when a complaint is filed and in the case of a clinical complaint, it’s going to be from the patient, the patient’s family, a coworker, or the employer.

They’ll come from one of those four sources. And in that case, what will happen is the board will get their complaint, and then they’ll send notice to the nurse. And then they’ll likely simultaneously subpoena the employment file from the nurse’s employer along with subpoenaing any patient records that would be a part of the investigation. One thing to keep in mind, and this is kind of general. This goes for the process for almost all the states. Obviously, it can vary from state to state, but this is kind of the general process. It’s very likely that the board will send a subpoena to your employer. Many times, if a nurse is dismissed from a position due to clinical incident and they get a new job, when they put that new job down on the questionnaire that the board wants from the nurse, they’re likely going to send a subpoena to your new employer as well.

So, that’s something to think about when to address the complaint with the employer. In the case of a clinical issue, once they get all the records, they get the employment file, they’re going to look to see if the nurse ever any previous issues with discipline at work had, any corrective action, verbal coaching counseling, any kind of similar incidents for whatever it is. Maybe it’s a missed medication, have they done that in the past? And then ultimately, when they have all that information gathered, they’ll likely do interview with the nurse. And then at some point, it’ll either be disposed of or forwarded to the board for a review. The other type of, I guess, the reason why a nurse would get in trouble is behavioral and there’s a bunch of things under behavioral. Other blogs of interest include:

One could be a criminal charge or conviction. It could be substance abuse issues. It could be mental health problems. It could be just the inability to get along with people at work and then boundary issues involving sexual relationship with a patient. I’m also going to lump in diverting narcotics into this. I guess you could put that in either category, but certainly, it’s probably a lot more than anyone expects. A lot of nurses end up diverting narcotics and I find that’s almost ninety-five times out of a hundred due to personal substance abuse issues. Very rarely would it be them diverting for either resale or for maybe a family member. I’ve had a couple where they were doing it for their significant other. As far as behavioral goes, this varies state by state, but some states require a nurse to report a charge.

Other states require a nurse to report a criminal conviction immediately, and then others wait to report the criminal conviction until whenever their renewal is. So, obviously based upon whatever the criminal outcome was and what it was, that can easily lead to discipline. I mean, the most common for nurses are domestic violence/assault, shoplifting, and DUIs. That makes up most of the criminal incident with nurses. Some states have a rule that states, if the nurse is convicted of a felony, it’s an automatic revocation of a license. Something considered many times when we have a nurse who’s been convicted of a felony, the main goal is for their criminal defense attorney to get that knocked down to whatever they can that would not be considered a felony.

So, criminal stuff, behavioral issues, it could be, as I said before, mental health or the inability to get along with coworkers or substance abuse. I guess all the states have confidential monitoring program, which would involve random drug tests, supervision at work, usually, AA/NA participation, counseling. This is a good option for nurses who want to keep their records clean and don’t want permanent discipline on their records. And it also provides them with the structure to hopefully get over whatever their issues are. Many of these alternative discipline programs can, not only be for substance abuse, but can also be for mental health and then physical issues as well. That’s kind of the broad category of behavioral concerns that can lead to board discipline.

Maybe some words of advice on how to handle an investigation: I find that maybe a nurse who has come to me after submitting a response, or even after an interview, tends to overshare especially in the written response. It’s better to keep it short and sweet and especially there are some serious considerations about what to disclose if there’s a pending criminal action as well. Because simultaneously, the board’s going to investigate the criminal, kind of track what is going on. And what you don’t want is to disclose a bunch of things on the nursing board and then ultimately maybe share with the police. And then that would lead the police to act against you. I mean, if you had to choose between going to jail and losing a license, it’s an obvious choice. So, those are the ways that a nurse can be disciplined or at least the most common ways.

How is Dental Production Calculated?

Will I be Paid My Bonus if I Terminate the Physician Contract Early?
Scroll to top