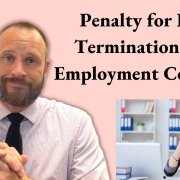 Is there a penalty for terminating a contract early in an employment contract? The answer to that is, it depends on what you consider a penalty, and then how can the professional terminate the contract. In all contracts, there needs to be termination language, meaning how can the professional terminate the employment agreement. And it’s usually one of four ways. One, if there’s a fixed term, so let’s say it’s a one-year contract, there’s no language about automatic renewal, then after the term ends, the contract terminates, and the parties can move on. Two, mutual agreement. If let’s say the relationship isn’t working out and both parties are okay moving on, they can mutually agree to terminate and move on.

You can terminate for cause. If one party is in breach, give them written notice, and then they have a certain period to fix whatever the breach is. And then lastly, without cause termination, which is the, I guess most standard way of terminating a contract. It simply means either party can terminate the agreement at any time with a certain amount of notice to the other. Depends upon the industry, but anywhere from 30 to 90 days is standard. Whether the professional must pay a penalty or is penalized in some way, depends upon the language in the agreement. Let’s say the professional received a signing bonus or relocation assistance as well. They’re moving from out of state or to a different city. Most of the time, there will be language in the contract that states if the professional leaves before a certain period, they’ll have to pay back a portion of the bonus.

Let’s just take a $20,000 signing bonus as an example, and let’s say it’s a two-year contract, the professional receives the $20,000 signing bonus. The contract may state that for the first two years of the agreement, usually, it would be monthly forgiveness. So, for every month that the professional is there working, 1/24 of that 20,000 is forgiven. Meaning if they stay for two years, they don’t have to pay anything back for the signing bonus. In that scenario, let’s say they only stayed a year and left. Well, they owe half of the signing bonus back. So, they’d have to pay back the employer $10,000. And that would, I guess, be considered by most people to be a penalty. Other blogs of interest include:

Same for the relocation assistance. If they reimbursed the professional for the costs associated with the move, the same thing would apply. Usually, it would be tied to the initial term length and then they’d have to pay back a portion. Some places do monthly, some do quarterly, and some do yearly forgiveness. It’s better for the professional if it’s monthly forgiveness. Because if you think of it this way, let’s say the professional leaves in month 11, and it’s yearly forgiveness, well, they spent almost the entire year there, but they left before the year ends, and now they must pay back half in the scenarios spoken about earlier. Whereas if it’s monthly, you would get 11 of the 12 months forgiven. And so, you wouldn’t have to repay as much. Some contracts will have penalty or liquidated damages if the professional leaves within a certain period, they’ll ask for recoupment of recruiting fees, in healthcare credentialing, privileging, any money they’ve spent on licensing, and DEA registration.

They may say in the contract, if the professional leaves in the first year, they must pay us back and reimburse us for all of these things that we paid. I don’t like that kind of language in a contract. I can understand for the signing bonus and relocation assistance to be a reasonable forgiveness but for recruitment fees, that’s just kind of the cost of doing business in my mind. So, that could be another penalty. Rarely would I see a contract that has a fixed number, meaning if the professional leaves within a certain period, they just simply must pay back 20,000 or 50,000 or whatever the number is. That is in some contracts. I don’t like that language either. I don’t think that’s fair. But these are all things that the professional needs to think about and absolutely needs to negotiate before signing the employment agreement.

Everyone who goes into a new job with the intention of it being a tremendous opportunity, everything looks great, all the people are great to work with and then you get there and it’s terrible, or that if you’re based upon like collections or commission or whatever, the work just simply isn’t there, you’re not making nearly as much as they said you would, or that you expected. In that scenario, you absolutely want the option to terminate the agreement and move on. And if there’s a bunch of penalties associated with that, it could be a problem.

Another thing to think about is if someone has a bunch of penalties in their contract for leaving, let’s say in the first year, usually to me, that’s a red flag that they’ve had a difficult time holding on to people, which means they’re probably a bad employer or treat their employees poorly or for whatever reason. But if there’s like a bunch of penalties in the contract for leaving within the first year or two, that usually means they’re either bad businesspeople or treat their employees poorly. So, something to think about as well. Those are kind of the ways a professional can be penalized if they leave before the term ends. Really must think about, alright, if this goes bad, what am I going to owe after the contract ends? And then you must determine if it’s worth even pursuing the opportunity or not.

What Does it Mean When a Nurse is Suspended?
Scroll to top